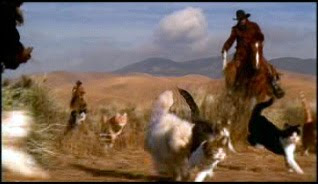 Will they mention ANY of the Following:
(1) One in Four Children Living in Poverty and suffering Hunger issues
(2) 24 Million UnEmployed ( Millions More UnderEmployed ) This figure does not even acknowledge the 22% Rate of Unemployment for Returning VETS, or for Americans over 40 and also newly graduated.
(3) We are behind other countries in Infrastructure and Education and Quality of Healthcare.

And do read this from Raw Story ( Raw Replay) has More from Robert Reich concerning Mitt Romney, that is a Must See and Must Read, and should prove enlightening for the Debate. 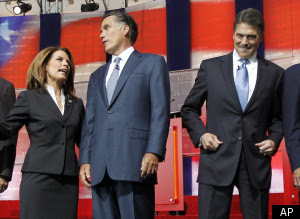 Brian is opening up the Questions with JOBS....and Perry is the first to be asked about jobs...he smiles like a drunken TVevangelical Toady gleefully spreading his "facts" like fresh morning manure.....And he starts spewing about TaxCut issues instead of answering the question...

ok...On to Mittens Romney.....he says that he did Mass down to 4.7 % jobless rate....( someone needs to check that stat) He's stumbling on his answers a little...trying to paint himself as a good businessman that will make him a good president...( cough and gag)....Ahhhhhhh Brian confronts him about the FIRINGS.....and Willard tapdances about this question...

And let's all note that the RED background is the color of Nancy's old dresses....how nice....

Perry gets rebuttal ( and he smiles again....why does he smile so much we are talking about JOBS...)

Ok..Willard gets to respond to Perry, Perry is smiling smugly...and now they are bantering between each other.....( boy these two don't like each other)

Santorum says he has worked on Securty and Social Issues ( dummass the question was about JOBS...)so he launches into a TAX lecture....he makes a little fist to emphasize his points...

Huntsman....now....
Ahhhh a China Question......Huntsman wearing a golden tie....looking tan and debonnaire....now he is talking about our Broken Core ( I am not sure what that means...) and now he talks about how he could talk Chinese to the Chinese......he's slick...could sell you a car....

Bachman on now...Hair has been done Texas BIG tonite..( marcus must have been nervous..) now she is Blaming the Obamacare for JOB problem....."Obamacare is killing Jobs" ( she has said this over and over...)Kids need Jobs ( oh good she is for child labor...lovely)

Now Ron Paul...looking like a well dressed Keebler Elf.....now he is blathering about Free Market ( I bet he brings up GOLD and the evil bad Big gov't).....now he is bitching about Bailouts and the evils of Regulation....
sigh...that was perdictable...

Perry keeps smiling ----happy to be the New Kid at the Birthday Party....

And NOW we have NEWT blathering on that Obama has failed because he did not talk to the GOP candidates about the economy....( old white bigot...)

OK....now Mittens video did not work...the other commentator from Politico is asking about HCR...( but the video did not work-so the question based on what Mittens said we don't know what was in the video). Now they are going to spend time to bash Obamacare....sigh... ( really tedious...)


Mittens blathering on and on....and he has his numbers wrong.....( 100% OF THE PEOPLE MITTENS SAYS OBAMA WILL OFFER CARE TOO)

and Now Perry being confronted about the Healthcare in his state...he dodges and says that the Federal Govt should not be giving any orders ( ahhh so he is scooping it out to the Tea party)....and for some reason he says that the Medicaid programs are not run right-so that is what the real problem is ( what is he talking about ????)

Huntsman is now talking about INDIVIDUAL RESPONSIBILITY ?????WTF ? ( I need Something to HEAVE at the TV.....marshmallows are not enough)

Now Bachman is saying that ONE/SIXTH of the Economy is being wasted on Obama Care-what is she talking about ??? lordy...this woman has the sense of a baked potato....NOW she is saying that it will be SOCIALIZED MEDICINE...( and does she even KNOW what Medicare is ? How about the Federal Workers are on what plan??? is that socialized care)

And now Newt is blathering on and on about how Obamacare is horrible...( boy he really is a little Bloated StayPuffWonders ) Newt is a real dummass...says the Media is not supposed to have the Repubs arguing with each other....( gee I guess Newt does not know what a DEBATE is )

Now Herman Cain is rambling on about Something ? Savings Accounts ? is he high ? WHO can save even a DIME right Now....Free Market is going to fix this ? lol.....yeah ...right...

Now Perry being asked about State Rights...and why Social Security is WRONG....

and he smiles like the Snake Oils Salesman that he is..

And NOW Perry is saying that the SS Program is a PONZI scheme....

( he is a load of horseshit...now he is dissing Rove and Cheney...interesting-doesn't care if he he offends them...lol)

Now Romney is being asked about Social Security is having "funding" problems ? ( why are they allowed to peddle this lie....)

on to the next assclown event...

Hi E ~ Just stopping by... I watched the debate.
Although they did not openly chant "drill baby drill", that is still the agenda, only now it has fluffy window dressing "resource jobs" just about every one of them echoed that theme.
They would let fracking & the Canadian oil pipeline & Mitt mentioned Nuclear power too.... sure because a toxic job that destroys the planet, fouls the water & worse are all reasonable trade offs for jobs?
You'll either have a job or it will kill you and or your drinking water or planet.
Either way it solves the jobs issue, dead or alive, right?
I'm glad they did not play softball w Perry.
Although he skirted around the "at or under min wage" jobs issue-- he just wanted to say *job creator*... no matter to him if they are sucky underemployed, working poor, have to work 2 jobs to keep afloat kind of job.
I was glad Ron Paul nailed Perry in the executive order for teen girls to have Guardasil injections.
He tried to play the cancer card-- but he was perfectly fine to give a government mandate for female reproductive personal issues. They did not even mention his sonogram & make the woman wanting an abortion view the beating heart & the Doc give a mandated discussion .
Nobody wants Rick Perry up in their very private business.
Both those things got thrown out in court .... but the fact he was OK making those kinds of rules, should make him be the red flag candidate.
Him & his not sure about the science after his state suffered the worst drought ever & now is on fire.
Get the hook. He really is off the charts dangerous & so Bush2 like, it;s scary.

absolutely fran...
Perry is Bush2...maybe even worse....his execution rate ???omg...and then the DRONES for protecting the Border ???? did anyone catch that ??? and Social Security is a PONZI scheme ???

why are his numbers so high ?? and the real question is will the TeaParty ( which I am pretty sure is shrinking by the day) going to get control of this election...

Hello there! Thanks for the Molly fun. If ya have a chance, for a laugh, skip over to Adgitadiaries and our 'Republican Theories About Everything' post. :)