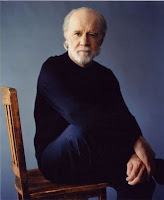 George Carlin died Sunday Night of Heart Failure at a Santa Monica Hospital. This wonderful Genius of the Profane and Profound has left us....He was one of the first Comedians that I treasured. It started with a Bootleg tape of THE WORDS the summer I was 12, and I was hooked. After that those ILLEGAL tapes were traded and coveted. And then I got to see him for the first time on an October Night in 1975, I was on my first Date, and we were at a friend's house watching the very first SNL. ( I will be honest I remember SNL better than the date).
He had an honesty and a clarity that was soothing, shocking and refreshing.....I last watched him in a movie- Jersey Girl a few weeks ago on Cable, and realized that he possessed an innate Humanity, and such a sexy cerebral persepective....he was permanently one of my first Crushes... Below some of the memorable Quotes and Insights.Sleep Well Dear George...R.I.P. dear man....

"Give a man a fish and he will eat for a day. Teach him how to fish, and he will sit in a boat and drink beer all day."
{{ Sent this to my grandfather on a Father's Day Card....}}

In the same interview, he recounted his experience of a California earthquake in the early-1970s as: "...an amusement park ride. Really, I mean it's such a wonderful thing to realize that you have absolutely no control... and to see the dresser move across the bedroom floor unassisted... is just exciting." Later he summarized: "I really think there's great human drama in destruction and nature unleashed and I don't get enough of it."

{{{ This philosophy made him so magical and B-A-D.....you knew if you have been on the Titanic, you would want to sit and share a drink with him while the damn boat went down....}}}

"I thought about how mothers feed their babies with tiny little spoons and forks so I wondered, what do Chinese mothers use? Toothpicks?"

A routine in Carlin's 1999 HBO special You Are All Diseased focusing on airport security leads up to the statement: "Take a fucking chance! Put a little fun in your life! ... most Americans are soft and frightened and unimaginative and they don't realize there's such a thing as dangerous fun, and they certainly don't recognize a good show when they see one."
Posted by enigma4ever at 5:47 PM

A little bit of joy left the world today. He was hilariously funny, and incredibly thoughtful.

It is just serendipity that I am always watching Olbermann's interview with him last year.

His interview "from" last year.

oooops having trouble posting to my own blog....grrrr....

Carlin was a cutting edge kind of ghetto intellect. A very smart man with a talent to tweak perspectives & just blurt out the truth.

• Our forefathers were slave owners seeking freedom.
• The American Dream- you have to be asleep to believe it.

thanksfully so many of Carlin's brainchild works are recorded in print & audio for us all to enjoy.

Whether you liked him or not he was a staunch liberal.

He was my favorite comedian. I went to see him one time in Vegas.

I think he was better when he was younger. The cynical, dark humor, at times was depressing.

Maybe he was better drugged.

I did not grow up in North America so I did not 'have the pleasure. thanks for posting this, it gave me some perspective on who/how he was. The Existentialist Cowboy also posted a video but from when he was older..thank god for youtube!

Great post! Carlin will always be one of my favs. I paid tribute on my blog also. He will be missed. Where will a good portion of us get our reality checks from?

Angie:::
I saw your post- it was great...isn't it funny how much he really did leave us...hmm, where we get our reality check? good question....

Ingrid::
well, you may not have grown up here...but you get the idea of how he effected us..and especially in the teen years he was priceless..I love this Video of him - that is kind of how I picture him...Some of his later stuff over on Youtube is a bit dark ( but I think that is because of what we have lived through....esp the past 8 years....

Renegade:::
I think I too like him best in the early years....( that was when he was drugged, and a bit liguored too...)
He had a series of heart problems and he took a break for a while....and then he also took at break when his wife died in 1997....and then he got sober....( and when he has been sober, he is more clear....but some of what he said was more profound...and yes, very dark...)

i love him. wonderful man