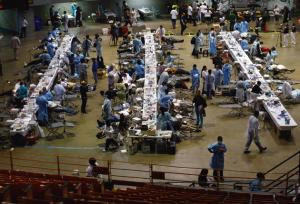 ~~~~~~~~~~~~~~~~~~~~~~~~~~~~~
Thousands lined up last month standing in the night waiting for care at RAM Event in LA. This has been repeated around the country at every RAM event, at fairgrounds and Gyms. As amazing as Stan Brock and RAM are, this is not the way we should be providing care to people...but it does show how big a problem we have.
~~~~~~~~~~~~~~~~~~~~~~~~~~~~
We are the only advanced democracy on Earth – the only wealthy nation – that allows such hardships for millions of its people. There are now more than 30 million American citizens who cannot get coverage. In just a two-year period, one in every three Americans goes without healthcare coverage at some point. And every day, 14,000 Americans lose their coverage. In other words, it can happen to anyone.
President Obama to Joint Session 9.10.09
~~~~~~~~~~~~~~~~~~~~~~~~
We have heard many people blamed for this Healthcare Crisis. People that are losing Insurance or losing Care should not be blamed. We should be calling DC, especially our Reps and Senators because the DC Bubble is shielding them from listening or talk to Real People Losing Care. The People who are really responsible for the Mess, are the Insurance Execs and we need to remind their employees that their Boss is making 120,000 in an hour? There is Greed and Gluttony at the Top and it is even hurting their own Employees.

This greed is sadly also effecting decision making skills and judgement in DC. Has anyone asked if Wilson was "paid" to Disrupt the Speech the other Night. In a way he was - one of his biggest Contributors to his campaign is the Insurance Industry- more than 240,000. Money and gifts can cloud Judgement. And has money and greed also fed to this cycle of Hate and fearmongering ? And has it destroyed civil conversation and dilaogue ? Write to your Senators, reps and the Media, they all need to be educated on the Facts.
~~~~~~~~~~~~~~~~~~~~~~
There are some numbers we have not been told and have not even been discussed, and they should be. The Numbers alone tell WHY the costs are so astronomical and WHY the Current System is Broken.And why we have a Healthcare Crisis.Please do share them, please also send to the MSM, or when you write to Senators and DC and the Whitehouse.If you write your Senators and Reps Do it again,and forward a copy to the Whitehouse, and Do write to the Repugs and Bluedogs too.And do it NOW, Time is of the Essence.
~~~~~~~~~~~~~~~~~~~~~~
LET'S LOOK AT WHO HAS GOVERNMENT HEALTHCARE
Medicare 47 Million ( This number includes Disabled-early medicare as best as I can find)
Medicaid 48 Million ( This number includes working poor, impoverished families, and only lower level working poor).
VA 50 Million ( these are VET numbers, I am not sure if this number includes families and Military that is currently serving.)
( I went through Govt links- I will post at the end if anyone wants to see).
9 Million Children recieving SCHIP.
Another number we have not seen mentioned at all is how many people actually have Insurance through Federal Employment, numbers are 12.4 to 14 Million, This number has rarely been publicized, but Bush did increase and expand Federal Employees by thousands and is graphed at the BLS. ( ie the Homeland Security Dept ?)
~~~~~~~~~~~~~~~~~~~~~~~~
This means that currently over 168 Million have access to Government Managed Programs, and this does not even include the State Employees and their programs. With that many having access to such programs, why shouldn't small businesses and the UnInsured and UnderInsured have access to more affordable accessible care ?
~~~~~~~~~~~~~~~~~~~~~~~~~
The Repugs and the Tea Party people keep saying that People Wanting Publicoption are in the Minority. That is not true, it turns out. It might actually be people with Insurance are in a Minority compared to people already accessing Government Insurance Plans. And sadly at this point the Repugs have shamed people without healthcare, so they are not comfortable to speak out in this current Hostile Climate that is filled with anger and hate.

According to New Census data released that does not have the the Economic DownFall Data, which President Obama admitted to the Nurses at his conference on Thursday is 6.6 Million, says that over 47 Million are Currently UnInsured. So that Number is Clearly over 50 Million Uninsured, at approximately 53 Million.

State Employee Numbers also have to be considered as they are people getting Government Healthcare, even though most states are currently struggling providing care to current employees and retirees under 65. The Bureau of Labor Statistics are updating all of their numbers this week, so I am having a hard time finding current numbers.

President Obama also said that the UnInsured numbers are still rising, with 17,000 a day losing care.( the previous number that had been researched was 14,000), That means that a HALF MILLION a month are losing Healthcare right now. That Means a year from now, the true Number of Uninsured Withhout Healthcare will be over 60 Million.The Number of People Losing Healthcare and Insurance is rising higher than the Unemployment Rate.

From the Speech:
Finally, our healthcare system is placing an unsustainable burden on taxpayers. When healthcare costs grow at the rate they have, it puts greater pressure on programs like Medicare and Medicaid. If we do nothing to slow these skyrocketing costs, we will eventually be spending more on Medicare and Medicaid than every other government program combined. Put simply, our healthcare problem is our deficit problem. Nothing else even comes close.

We have other numbers we have to consider, People losing Jobs and Homes have damaged credit, they too can not qualify for Insurance. Especially the people that have had to declare Bankruptcy due to medical debt ( the Number One cause of Bankruptcy is Medical Debt).People who are renting after such events, or struggling to find part time work have no money for Private Single Insurance Plans. The number of people on FoodStamps in the highest ever, over 35 Million, they too are working poor and have no money for Expensive Private Plans.

The dialogue on this issue has to be more focused on Working Poor, Poverty is an issue for people in that they can not afford to live. And the Repugs need to be schooled that the American People, even their Constituents are hurting, and among those numbers of Undermployed or Working poor. It is NOT just Democrats that need affordable Accessible Healthcare. And President Obama also pointed out that the Whitehouse is literally tracking Millions that are being denied care and losing care, we as a Nation Cannot turn out backs on Millions of people.22,000 People now are dying per year without healthcare , 179,000 Since 2001, Does Anyone really want to see how high that number can grow ?
~~~~~~~~~~~~~~~~~~~~~~~~~~~~~~~~~
(1) Mortgage Crisis Numbers.
(2) WashPo. Article on Federal Employee Numbers.
(3) AFMSCE has press releases explaining why the biggest State Employee Unions support the Public Option.
(4) DO READ President Obama 's speech again,really does explain alot of WHY a Plan is needed- he spoke for 7 minutes on the Public Option.
(5) Bureau of Labor Statistics
Posted by enigma4ever at 3:30 PM

Email ThisBlogThis!Share to TwitterShare to FacebookShare to Pinterest
Labels: 50 Million Need Healthcare, HealthCare for ALL, PUBLIC OPTION IS ESSENTIAL