From The Video:::
On December 23, 2010, ARME rescued two Beagles from a medical testing laboratory. These dogs had never seen the outdoors, walked on grass or felt a gentle touch. We captured their first steps into a kind world. They had also been de-barked and fed only "laboratory chow." ARME will continue with these rescues when it can. If you are interested in adopting or fostering our next rescues, please contact us at: armeteam@gmail.com
Posted by enigma4ever at 4:20 PM 1 comment: 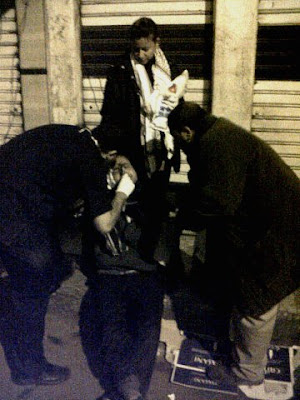 {Actual photo from the Square: Wounded being treated by Doctors in the Tahrir Square. Makeshift hospitals being set up by the Museum and the Mosque.Can not give credit for safety reasons.}
~~~~~~~~~~~~~~~~~~~~~~~~~~~~~~~~~~~
When I despair, I remember that all through history the way of truth and love has always won. There have been tyrants and murderers and for a time they seem invincible but in the end, they always fall -- think of it, ALWAYS."~~Gandhi, Just yesterday Gandhi groups were sharing and reading on this very Square.
~~~~~~~~~~~~~~~~~~~~~~~~~~~~~~~
At approximately 1 PM Cairo Time all Hell broke loose in the Tahrir Square. Thousands of peaceful Protesters were still there including many families.At at about 12:30 PM their time, suddenly Cellphones were working, and some were saying that Internet was working. Some even tweeted to each other that maybe "normalcy" was returning, others that it was an ominous sign. The Mubarack Thugs started arriving very suddenly they arrived via trucks and also on Camel and Horses, some had Machetes and knives and and whips... others started throwing rocks. ( I will post the Whip photos and video when I get it to embed, It was barbaric and the Army stood by and silently did nothing.).
~~~~~~~~~~~~~~~~~~~~~~~~~~~~~~~~~ 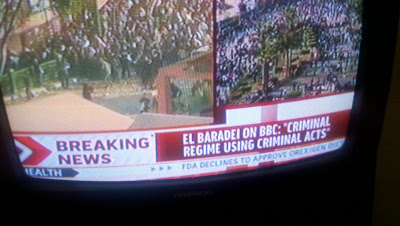 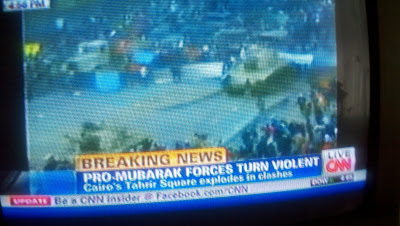 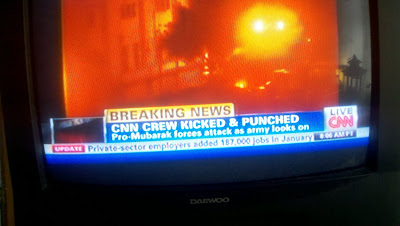 11PM in Cairo and the Battle is raging.
And the Bloody Battle Rages on, Thousands are stuck in the Square and having to defend themselves against Mubarcack's Thugs, His Thugs are known Bullies and known for behaving in this manner, according to Twitter they were recruited and paid to do this. They are now on Roofs throwing Cement Blocks and Fire bombs and Molotov Cocktails down on the Democracy Protesters down below. ( Someone allowed them up on those roofs.) That the Military that promised 24 hours ago to protect them and now is enabling these thugs to crush these peaceful people. According to HRW atleast 6-8 dead and more than 600 Wounded.

(( It is now 4 PM here and 11PM in Cairo and the Battle is raging. In my lifetime I have never seen anything like this, I will try to update, I am still gathering off Twitter both real time accounts,photos and video)) And I will post photos off the TV as not alot of the video is available yet. Many of you remember I did Blog Iran, but in some ways this is worse. In June 1989 we all witnessed Tinemann Square where the Army unleashed horrendous violence, but this is worse because the Army that had promised Protection is sitting by allowing such brutality. Only an Angry Unwanted Dictator would do this to his own People and order such Violence. And anyone with eyes watching this knows this is not a peaceful path to Democracy. This will continue to be a Bloody Night in Cairo. Prayers to Egypt.))
~~~~~~~~~~~~~~~~~~~~~~~~~~~ 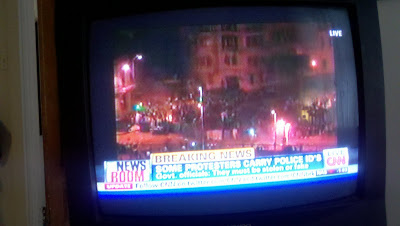 Army has done little all day. Protesters have been detaining Trapped Thugs and they found weapons on them and Police ID. Anderson Cooper is reporting at MN that the battle rages on and the ProDemocracy Protesters have created a Metal Barricade to block off the Cairo Museum and they have set Tanks on fire to protect the Museum. ( 5PM Anderson's film footage running on CNN from the beating earlier today, explaining that anyone with a camera is very vulnerable.)
~~~~~~~~~~~~~~~~~~~
1AM update::: (via MSNBC,CNN and Twitter)
Medical Update, atleast 6-8 dead. 1500-2000 Wounded. Doctors went to great extent to get doctors medics into the Square.
Most of the Patients have Head Wounds, and also burns. Some are being allowed to be transferred to hospitals now. But it is still difficult to get wounded out of the Square, so there are many walking wounded. Doctors and medical people are going to the Square and stocking their own cars with medical supplies and tending to wounded and trying to move the critical ones to the hospital.
The Square:::The Protesters have managed to get the turf in front of and next to the Museum., this started because too many Molokov cocktails were being thrown near the museum, so people moved there to protect it and put out fires, now they have fought tooth and nail to protect and claim this turf, making sheilds out of signs benches, they even moved cars and debris to create the barricade. ( It is important to note that when these Protesters went to bed last night they sang, drank tea and had NO weapons with them,,.,,NONE).
Posted by enigma4ever at 12:10 PM 5 comments: 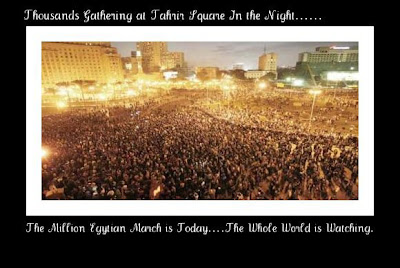 ~~~~~~~~~~~~~~~~~~~~~~~~~~~~~~~~~
It is 10 AM now in Egypt, and we all have been watching CNN all night and monitoring Twitter, and CNN keeps replaying Anderson Cooper from Monday and MSNBC is replaying their evening lineup. CNBC which for the past 4 nights has had market updates has PAID Informercials. PBS has Antiguies Road Show and the Main Cable have paid informercials. Nothing but a whole lot of New Sucky Vacumn Cleaners, and Hair Products and Juicers. NOTHING about Egypt right now. But Some are able to access Al Jezeera (Arab) and this photo below shows that Tahrir Square is filling up despite the Road Blocks and the lack of Trains and Transportation. People are walking from far away, even from The Nile. On Twitter do follow @NicRobertson and @bencnn ( Ben Wiedeman). Supposedly Mobiles will be shut off, but they are still able to use blackberry for now. Many cameras and phones have been confiscated.There were reports in the afternoon of a Journalist even being stabbed-but I could not find more information or tweets about that. Bottemline The Reporters are very much at risk, but this story is one of the most important in our History.They must get it right and must get the story out to the rest of the World. The Whole World is Watching. NBC reported from Cairo and has full team there, Brian Williams is the only Anchor there.

I am worried about CNN , in the days of Katrina and even back to China in 1989 they were braver than this,...I also worry Something is Wrong....but time will tell. ( I do know watching Piers Morgan interviewing people is not "journalism"),

Al Jezeera jouranlists were arrested and detained for 3 hours this morn,then released but all of their equipment was confiscated. They are now using other means to get the story out. Thousands did camp in the Square and we will see how many get there today without Internet,cell phones or trains. 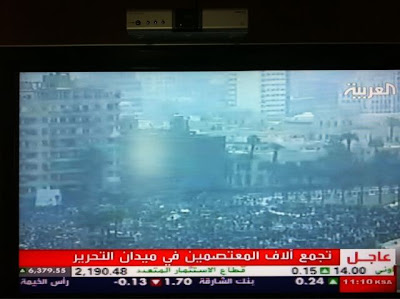 CNN has confusion as to how they want to portray this story, in mid afternoon they said that it was "Egypt Uprsing and even called it a Revolt".But by 10 PM tonight, they were calling it a "Crisis" again , usually when Wolf Blitzer is on, that wretched fear mongering term is used. 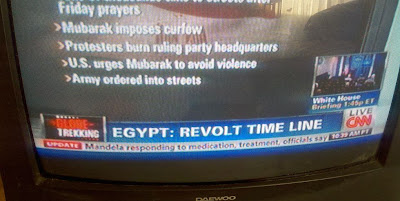