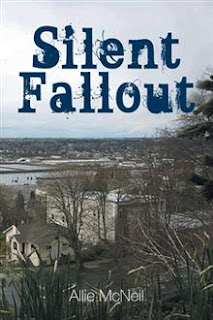 I wrote earlier this Month that my book "Silent Fallout" is now out. For those that don't know the story of the book, I have been working on this book for quite a few years. It is the story of living in the North West and witnessing Dumping and working hard to solve the Mysteries of the Dumping. I ended up doing a County Wide Health Study and being a FOIA goddess, and creating a Non Profit to study the health of the County and confront the Powers that be about the level of illness and the level of contamination. Below is a sample chapter, that hints at the story that unfolds. It is now available on Amazon. And it is also available from Authorhouse, and you can check the site here. And then there is Barnes and Nobles' Website also has it listed. I am hoping to have a book signing at some of the local smaller Bookstores that I love and support locally.

On a dark and stormy night in September 1999 in our little cabin house I would see Something that I had never seen before. We went to bed after reading Harry Potter and watching the Xfiles. I let my son and the dogs snuggle on my bed with cookies and milk as the winds and rains railed against the House. At around 2am the dogs had to go so I hustled them out to the deck off the back of the house. With the heavy rains I knew that we would not see the Mama Cougar and her baby.

I took them out on the deck to wee, as undignified as that sounds.I felt that they were safer on the Deck, even though we had seen the Mama Cougar below a few times. While they did their duty I would usually stand watch over the Bassatt and the Scotty and I would look over the Creek that wound down the hill towards the Lake. As I stood on the deck watching the Swaying tall Pines and Cedars I could also hear another Sound above the Winds and the Creaking. I realized I heard Trucks Engines running.I also could breathe in a terrible aroma, like Ammonia mixed with skunk. It was so strong it took my breathe away, made my eyes water and made me gag. I pulled my turtleneck above my mouth and wiped my eyes.

As I looked down the Hill, I could make out Two Red Tanker Trucks down by the Creek. ( They were double Tankers). I was puzzled so I went inside and got my Birding Binoculars. ( I had gotten the Binoculars hoping to watch all kinds of new birds at our new home, sadly there had not been as many I hoped). As I looked down the hill I could see the Tankers. They were pulled by the Creek, and One tanker had a hose hanging out the back snaked behind the Truck going to the Creek. And the Other Truck had simply opened a valve in the back and just gushing fluids into the Creek, hoses laying in a messy pile by the truck. The two workers were running back and forth and yelling at each other. I could make out no writing on the Trucks, they were older Tankers and very dirty.

I took the dogs inside and sat on the sofa stunned. Had I just witnessed Midnight Dumping ??? Was there still such a thing ? I sat and listened to the Trucks come and go , over and over until Dawn. By morning the Smell would be overwhelming and nauseating.By the next morning the questions would be rattling in my head. Did the Creek Feed into Our Drinking Water Lake ( I was pretty sure that it did). Was the Creek near a Drinking water Intake ? What the Hell was the Smell ? Were those Dangerous Chemicals they dumped ? WHO were they and where did they come from ? Who do you call when you think you have seen Midnight Dumping ? ( It's not like there is Hotline listed in The Yellow Pages). And How Many people drink water from that Lake ?Should we even be bathing in this Water ? Who else knew ? I sat there stunned and worried and realized that I did not really Know what to do. I also prayed that I would never see the trucks again.

So that day I went and bought bottled water for the animals and the people. And the Rains continued and by late afternoon, the smells had dissipated greatly. I remained worried. I promised myself that if I ever saw The Red Trucks Again, I would call Someone or Do Something. I was not sure What "Something" was, I just knew I needed Answers, for me,for my son, for my dogs. I knew that the smell made me ill, and that it was a Creek that meandered down to the Lake, a Lake that we drank from, so that made it seem more urgent....maybe even Dangerous.

But the Second Night arrived and at 2 am , I awoke when I heard the Trucks, and I knew they were back. Now during the day I had told my son about the Trucks. I had to , as I would not allow him outside due to the smell. ( Not that he wanted to anyways, after smelling the deck). l got the binoculars and looked down the hill, and they were in position again, backed up to the Creek. I sat up and listened to them yelling and running back and forth. It was still raining hard, but I could hear them unloading. I decided that I could follow them and see where they went , and that would give me a clue as to What they Dumped in the Creek. The Men were still rushing about and I could hear them yelling, coughing and gagging. I stood on the back porch bundled in an old coat and with a scarf over my mouth and nose, trying to see them better with the binoculars.

As I stood in the rains for a second night, straining to see with the binoculars, and biting my lip and wiping my eyes, I realized that I was going to have to make a decision about What to do. I had only lived there for 5 weeks, but I needed to Know More. I knew in my heart, my gut I was going to have to do something Drastic. I was going to have to see WHERE the Trucks came from, and there was only one way to do that. On that wet deck and in the Dark I made a Decision that would Change Everything, there was No Turning back from that moment.

So I got dressed, and also got my son dressed with a jacket over his jammies, and then I put supplies in the car. In my knapsack, A Camera, maps, a flashlight, and cookies and juice, and dog treats. I loaded all my sleepy crew in the car as quietly and quickly as I could. There were some groans. I could not leave my son alone and my Husband was working, so there was no other plan.I treated it like an Adventure , another Great Learning Experience.I am just a nurse, a mom, I have limited MacGuyver skills or Magnum PI skills, but I figured that I could atleast get answers to some of these questions, it should not be that hard.

So we drove down the bottem of the hill, and parked off to the side around a Turn, where the Trucks could not see us and waited for them to pass. I had a hunch they came to town, so I made sure to be on the road that headed back to town. Sure enough within minutes the two Double Tankers came zooming by and I decided to follow them. I figured I could atleast trace the trucks, or see where they came from. I did not count on Empty Trucks moving very fast, even in the rain and on the wet roads. So there we were, my son, my dogs and the little hatchback following the Tankers.

My son was sleepily propped in the seat , sharing cookies with the dogs, pointed out that the tankers were going pretty fast. I agreed. He said it was fun being sneaky dressing in black and sneaking out of the house, that it was a real adventure, that were were like Scully and Mulder ( off Xfiles). He also pointed out that the Tankers were pretty sneaky with their dirty license plates and hard to read initials on the back of the truck. It as amazing how Dirt could camouflage the information we needed. I asked my son that we kind of keep this Adventure our little secret, that others might not appreciate our Mission.( I wondered if this would end up on the Homeschooling Scoresheet as a "Good Idea". ) He giggled at one point and looked at me with his big eyes and the crumbs on his face and said " Maybe this is Our X File". Time would tell how accurate that statement was.

We did our best to follow the Trucks , but they were too fast for us. I was never sure if they saw us, or just drove like that all the time. I did for sure note they were indeed headed into town, but after the fourth turn I lost them, and I refused to drive that fast on wet slick back roads by the Lake. My carsick dogs also contributed to this decision, my son had already fallen back to sleep. So we headed home and everyone was asleep in the car by the time we got there. I put everyone to bed and noted the horrible odor again.

And so Began my quest to track down the Midnight Dumpers.....little did I know that would be just the first time following trucks and making a Bold Decision at 2am, there would be many more. Midnight Dumping was merely just a small piece of a much bigger Puzzle that had been in place for many years. But for some reason I was the First and Only Mom that ever decided to Follow the Trucks.

And that Quest would lead in many directions that I did not expect or could never have predicted.....Boxes and boxes of data, 40 years of data in 10 different offices, and thousands of letters to all kinds of Officials and Offices....and Heights of Corruption that still make my head hurt. And there would be Names that later would be prominent in headlines of an Administration plagued with Lies...and by then the Red Trucks would make Sense. And the trucks were just a small piece in a very ragged Jagged Dangerous Jig Zaw Puzzle and the question was would the Puzzle be solved in time to help a little town ?
Posted by enigma4ever at 10:38 PM

Just purchased a copy and I can't wait to read it. I have family in Bellingham, so it is a personal story for me.

oh Tara...
yes, then indeed it is personal...I wonder if they know any of this story...they might ...most of it happened in the past 10 years....( my name was different then..I was living there I was still married...)

It is a bumpy story....in some ways it has a happy ending...the Dumping did stop....and for the people there, that I had to leave behind that too matters...

Thank you for ordering a copy....

In some ways I wish I had told the story better....but sometimes there is no tidy way to tell such a story....
but all of it is true....I can not change that....

Wonderful, so glad your book is out. I'll be buying it!