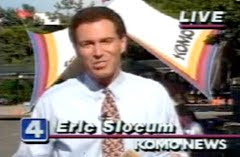 Today while on Twitter I learned that Eric Slocum died. He died on Feb 25th, his KOMO family were the first to releaase the news on Twitter and on the web. He was only 54, he was a wonderful part of Seattle's Broadcasting family, on the air on KOMO for many years, leaving the news family to do radio years back and then leaving radio over 3 years ago to work on his memoir. He was an accomplished broadcaster, journalist, anchor and radio man, and yes a poet. If you lived in Seattle in the 1990s you would know his stories and broadcast work well.

Please do read the posts linked below and also do watch the KOMO video below, and do go to his blog and read his poems. His friends do know that he wrestled with Depression and also in the past with his battle with alcoholism and OCD, and life as a gay man. He was living in South Seattle with his partner and the Pit Bulls that they lovingly rescued and gave a good home...He was a kind man...a good soul. I send his friends and family much Light and hope that he is at Peace now....

~~~~~~~~~~~~~~~~~~~~~~~~~~~~~
(3) Eric's Beautiful Blog, http://eslocum.blogspot.com/, shows a glimpse into his tortured, sad soul....The Poem below is what he posted on his final day, and the other posts of this month clearly show that depression was overwhelming and painful..too painful. His Blog is beautifully written, and clearly shows his pain, his agony.... 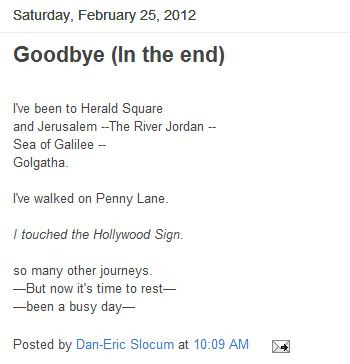 ~~~~~~~~~~~~~~~~~~~~~~~~~~~~~~
Dan-Eric Slocum ( Off facebook)
When I was a gay teenager - I tried to commit suicide. I'm 54 now - so it was not an accepting time for gay teens. My short poem 'oleander' recalls a moment with my father in a psych ward. I, still in late middle age, battle major depression and suicide every day. People don't like to talk about it. But we, as a culture, MUST deal with mental illness. I will fight like a bear to get a message of NO-STI(GMA out there for those who suffer chronic depression. STAND UP. SUPPORT THOSE WHO BATTLE TO STAY ALIVE. Brain disease is no different - in lethal nature - than cancer. http://eslocum.blogspot.com/
********************************************************
Why I remember Eric....
In Seattle from 1988 to 1998 I worked caring for AIDS Patients, as a Nurse this work was a huge part of my life. And it was complicated as we lived on Capital Hill, so I was caring for Patients and neighbors and friends...I worked at the First AIDS Hospice in the Country, Rosehedge and also did Home Infusion Therapy and was an AIDS Coordinator for the Biggest AIDS Home Infusion Program in the Country and I also worked at the Needle Exchange and ER at a Local Downtown Seattle Hospital. The Nineties in certain cities were an AIDS Battlefield...Seattle was one such city.

In the Nineties I met Eric at two different Patient's Houses...And both times he was lovely, a gentle soul who gave to his friends....He was the type person who would bring soup and lattes late at night for the Caregivers. He had an easy smile and gentle spirit, he was calm and helped without asking, making eye contact and saying just the right thing. He was good to his friends....He had very sad eyes, I remember that, but in those times many had pain in their eyes. In both settings I met him he was Kind and unassuming. ( Not all Broadcast personalities are so gentle and so giving...it is a rare thing). He was the type friend who "Showed Up". I last saw him at a Funeral many years ago....I remember what he said and how kind he was.

His Poems are so haunting...and show he was in so much pain. In many ways, this has been a week about Pain and Endings....

A real friend is one who walks in when the rest of the world walks out. ~Walter Winchell
Posted by enigma4ever at 9:29 PM

This is a beautiful tribute. Thank you for sharing your stories of your times with Eric.

May he finally rest in peace. :(