Please Please My Furry Little Rodent Friend, please see your Damned Shadow so Winter can come to an end in 6 weeks.... 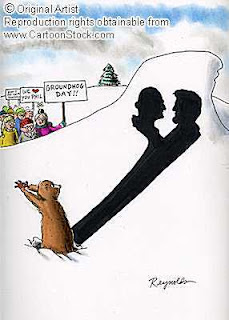 Punxsutawney Phil emerged just after dawn in front of an estimated 13,000 witnesses, many dressed in black and gold to celebrate the Pittsburgh Steelers' Super Bowl victory the night before."There's significant buzz from the Steelers win and quite a few Terrible Towels floating from the crowd," said Mickey Rowley, deputy secretary for tourism in Pennsylvania.The annual ritual takes place on Gobbler's Knob, a tiny hill in Punxsutawney, a borough of about 6,100 residents some 65 miles northeast of Pittsburgh.The Punxsutawney Groundhog Club announced the forecast in a short proclamation, in which Phil acknowledged the Steelers' 27-23 win over the Arizona Cardinals.

According to German superstition, if a hibernating animal casts a shadow on Feb. 2 _ the Christian holiday of Candlemas _ winter will last another six weeks. If no shadow is seen, legend says, spring will come early.Since 1887, Phil has seen his shadow 97 times, hasn't seen it 15 times, and there are no records for nine years, according to the Punxsutawney Groundhog Club. In reality, Phil doesn't see much of anything. The result is actually decided in advance by 14 members of the club's Inner Circle, who don tuxedos and top hats for the event.

Rowley said the Groundhog Day festivities are Pennsylvania's largest tourist gathering in the winter. And if Phil's forecast proves correct, it should bring even more tourists to the state."It's six more weeks of skiing," Rowley said.
Posted by enigma4ever at 11:12 PM

Email ThisBlogThis!Share to TwitterShare to FacebookShare to Pinterest
Labels: winter or spring??

I sure hope so...I am so ready for this nightmare winter to be over..
However my dad used to say.. if he sees his shadow it is 6 weeks if he doesn't it is a month and a half... lol
count the time till Spring on the calendar... almost 6 weeeks...

I am so done with this...at this point I would go paint a shadow on the snow for him....

We have a local groundhog on Long Island named something-or-other Chuck and supposedly he did NOT see his shadow. But I'm afraid Phil is the real prognosticator in my mind and given how awful this winter has been so far it is more likely that his forecast of 6 more weeks of winter is the right one.

Enigma,
I hope Phil is wrong. I know all of you up north are completely fed up with Winter!!

I wish I could crawl in a hole and hibernate...