Do you live in Ohio ? Learn about Kasich and his Union Busting Manuevers, and Fight Back SB2, VOTE NO ON ISSUE2 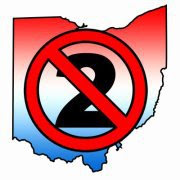 Here in Ohio, Gov.Kasich has created a very hostile Environment, pitting Workers against Workers and via a "Concerned Budget" agenda, he and the Republicans had decided to cut the Benefits and pay and negotiating powers of 350,000 workers across the state via passage of SB5, from custodians, to teachers to police and fire, to Nurses. Basically this Union Busting strategy would effect a huge number of families across the state. He also has cut jobs and staff in this state, already eliminating over 21,000 jobs and with 30,000 at risk due to SB5. ( No MSM has talked about this worrisome statistic and trend).

So this summer many of us worked to collected petition signatures, over 1.3 Million Signatures were gathered, one of the largest numbers ever in an effort to overturn SB5 via Referendum. Destruction of Collective Bargaining Rights effects Worker's Rights. You can also learn more at "We Are Ohio " group's website has all the details and latest you can do to help the Working People's Efforts here. And here is the webpage that explains the Facts Vs Myth and clears up much of the confusion.

Why Nurses are Voting NO on Issue2, to protect Safe Staffing Levels,

And why Firefighters also say NO on Issue2 as SB5 puts Communities at risk,


In August when Petitions were being passed around the state, even the Clergy came out and supported Worker's Rights.
Posted by enigma4ever at 9:00 AM