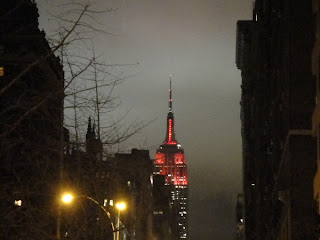 ~~~~~~~~~~~~~~~~~~~~~~~~~~~
(From Twitter @unrealgenius Empire State Building lit honoring World AIDS Day )
Today is International AIDS Day. For those that don't know I worked as an AIDS Nurse in the NorthWest ( mostly Seattle) for many years in the late 80s and 90s. I took care of my first AIDS patient in 1982 while in Nursing School and no one knew What the Disease was at that time. By 1988 I was working in Seattle,taking care of friends and neighbors, working in one of the First AIDS Hospices in the Country and also at the first Needle Exchange in the Country and also one of the First HomeCare Agencies taking care and providing Hospice to AIDS patients.....So I have a deep concern about this issue, it really saddens me to still be blogging about it so many years later, as it remains a crisis for the world. Here is the Post I wrote four years ago about AIDS, it is called Chinese New Year" An AIDS Tale. It is still a Disease that is causing so much loss in the world. Yet there are treatments to help those effected live longer, but the spread is still so tragic. Education fell apart under the Bush years when Condom use and teaching fell apart as part of Aid.
Posted by enigma4ever at 7:18 AM

We did a post too, but amazingly, not a single comment. People just don't seem to want to know anymore. Peace, MandT at http://adgitadiaries.blog-city.com

oh Mandt I will come read your post....sadly I think people don't know what to say about it....on Twitter and Facebook the talk on it was very light as well...so sorry friend...

Sadly the meds needed to manage this disease are very expensive.
Hard to address the topic without going into a rant of what seems like a broken record.
We have $$ for wars, and corporate welfare, don't we???
It would be interesting to know how much it costs to buy those same meds in Mexico & Canada.
Nuff said...

Your post on AIDS awareness really struck a chord with me and I too feel like the world has moved on to the other scourges that plague humankind.

Rae Lewis-Thornton is a well know AIDS activist who has fought bravely and in a honest and forthright manner with this disease. I heard her speak when she was first diagnosed many years ago and traveled the country ringing the bell and advocating for the victims of this disease. She also fought hard to educate folks on how to protect themselves from contracting it. She's featured on the site I've listed below as she gives us an update and a rather frank account on the chronic nature of this disease and how things stand. Whenever, I feel hopeless about this epidemic; reading her updates have been inspiring to me. As a clinician I've worked with those who have been a part of the collateral damage of AIDS or have loved ones who've succumbed to the disease. She is my shero and I want to share her account with your readers.