The Amazing Library at Zucotti Park Occupy Site was destroyed, so please help them rebuild it..... 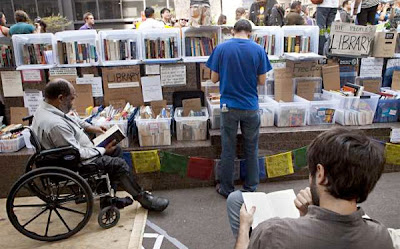 Zucotti Park Occupy Site had an amazing Library of more than 5000 books on so many subjects, from Peace Leaders and Non Violence Training and Economics and even health eating and childrens books and Pet Care. When the Camp was raided at 3:30 AM Very Late Monday Night ( early Tuesday Morning) Much of the camp was destroyed or scooped up and put into the trash dumpsters that came. Tents were slashes and pulled apart and belongings thrown away. It had been set up in a Tent donated by rocker Patti Smith.

There are some items that are still being searched for including the Bike Powered power generators and the Professional Drums and yes The Library.At first it was said it was destroyed in all the confusion this seemed likely, and the protesters were given less than 10minutes warning and were asleep, so there was not time to gather that many books. And then later yesterday the Mayors Office said that the books were moved to a storage area, but the photo showed only a few hundred books. So on Twitter the cry went up to Rebuild the Library and yes, you can ship them to NYC. Here is more about how to Ship them, So let's all give to the People's Library, here's the link, let's get busy sending them Zinn, Mandela, MLK etc etc... You can also go help retrieve the ones that Sanitation Dept stored.

Here is the People's Library blog and they also explain that they need help rebuilding the Library and Retrieving the Books from the Sanitation Storage Locker. And if you are on Twitter you can follow here, @OWSLibrary (The People's Library). UPDATE :: Today People did go and try to retrieve the Library, and you can read their blogpost that the Mayor's Tweet that the library was "saved" is not true, only a little of it was saved and a good bit of it is gone forever and other books that were saved are damaged. They are still doing inventory at the Sanitation Garage as of 1PM.

Visit msnbc.com for breaking news, world news, and news about the economy 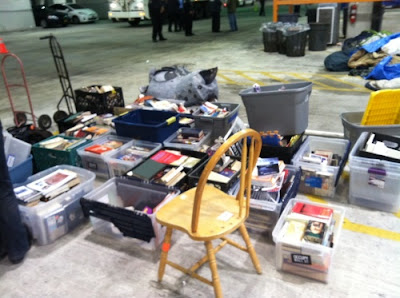 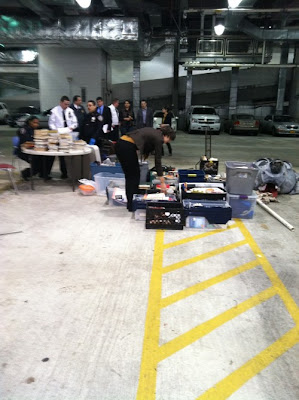 So the day after the Raid of Zucotti Park, teams of people with vehicles went to the Sanitation Garage to retrieve the Library that the Mayor had claimed via a Tweet had been saved and taken to the Garage. These photos are what is left of the OWS Library. Gone are all the Shelves of books and materials, even the Reference Library and the Kids Library. 5500 Books, the Laptops that kept track of everything. These photos show only a few hundred books and a damaged chair. When Books are treated like Garbage we are indeed in Dark Times. I do ask that you read the attached websites and do find a way to give or send books. ( I personally think we should all mail copies of "1984" to the Mayor's Office). Books had been donated from all over and even autographed and sent, so we need to Rebuild what was truly a wonderful thing. Libraries have been closing all over, but that Librarians worked so hard to make this a REAL Library is beyond heroic. ( And the Librarians were even Jailed that night as well.) Please do what you can to Help this Noble Cause.

*** AS OF THURSDAY NIGHT NOW THE THUGS GUARDING ZUCOTTI WILL NOT ALLOW BOOKS IN OR MUSIC OR FOOD. IT IS TRULY BECOMING A WARSAW GHETTO.****
Posted by enigma4ever at 6:20 AM

I find no coincidence of the timing of the actions taken in NY, Oakland, and Seattle. (with other cities following the lead)
Get out of the way of Christmas shopping.
How dare Occupy interfere with corporations jumping from red to black.
Consume, consume, consume.
OCCUPY EVERYTHING;ESPECIALLY CHRISTMAS!
Sorry, I'm just disgusted.