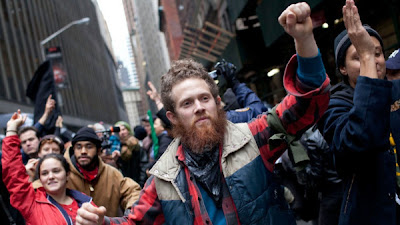 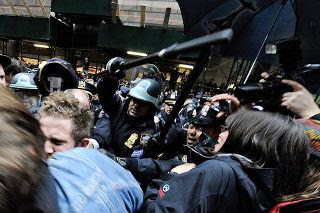 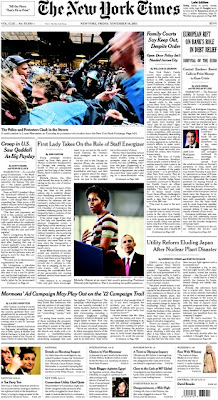 From Lori Vest..
(*mom of young man in the NYT Front Page Photo*)

To the editor of the NY Times, Mayor Bloomberg, Police Commissioner Kelly, and US citizens,

I made my first trip to New York City last summer and spent a small fortune (not for you, Mr. Bloomberg, but on our school teachers' salaries) enjoying city life. We paid our share of sales tax, city fees, tourist fees, etc. Little did I realize that this would help fund the NYPD to beat my son over the head with a metal club, as he was peacefully trying to follow his convictions and help the US people. He was on the front page of this paper, the NY Times, on Friday, Nov. 18th. My son is a self-employed farmer, a small business owner, an educator in sustainable farming, and a young man who has helped build houses for Habit for Humanity in three different countries.

As a first grade teacher, I spend lots of time discussing that it is not okay to hurt others, no matter how mad you are. Lately we have all seen pictures of dictators abusing the people of their country and we are appalled. President Obama said on Jan. 28th, 2011, “The people of Egypt have rights that are universal. That includes the right to peaceful assembly and association, the right to free speech, and the ability to determine their own destiny. These are human rights. And the United States will stand up for them everywhere “. However, the same brutality is being shown to peaceful US citizens. It is time we get appalled and stop it, whether we agree with the OWS protests on all levels or not. Each one of the demonstrators is someone's son, daughter, parent, brother, sister, etc.

The brutality factor has no justification. Period.
Who is giving the orders to proceed w violence?

In fact, the next protest should be aimed directly at the overuse of police force. Imagine the irony of the police coming out dressed like storm troopers to intimidate protestors who are trying to highlight the excessive uses of police force and intimidation. We might be treated to such a show very soon, as leaders of the police apparently cannot tame their authoritarian instincts even when self-preservation and legitimacy are on the line."

I've seen & heard lots of news coverage stating the cost of having enhanced police presence. I love the idea of protesting the police overreaction & the ironic, or would that be oxymoronic response that would create! The Occupy movements have been largely & purposefully peaceful. In fact when the Portland Oregon eviction came down, the Occupy crowds were often chanting, to the riot gear clad police, "We are peaceful people".

Wow! That was powerful stuff facing down baton wielding, in your face, throngs of riot police. Such a Gandhi moment.

The sad commentary is the masses have been so quiet & complacent, law enforcement & municipal authority figures are startled to suddenly hear the roar of the discontent & realize there are so many.

Imagine if the Occupy movement grows to a point where they realize there is no way they can send floods of police to try to have an intimidating presence at every event peaceful citizens opt to exercise their Constitutional right to assemble freely.

I'm loving the peaceful revolution & hope the police calm down & learn this is the new normal, and understand it is a constitutional, legal right to freely assemble.
Granted the free speech is at a roar, but it is long overdue.

Link to a great article

Thanks ..fran..time will tell if the Police come to our side...realize WHO they are....they too are the 99%..and once they come to our side this will change everything....it's starting...