Our Life at the Curb....Yes I alone lugged a Soaking Wet Three Story House to the Curb 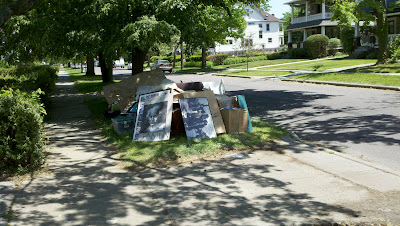 ( This photo is just one pile at the curb, all week long I kept dragging more and more wet damaged stuff to the curb, because Landlord would not allow SERVE PRO to come to the home, even though I had a claim number).
So the Landlord refused to come the Night of the Flood, even though I called him, and the Fire Dept ordered him to come to the Home. He refused. The Incident began a little after MN. I did contact him right away, the phone rang and rang. I did call 911, and PD and initially got nowhere. Then 45 minutes into the Crisis I thought of calling the Fire Dept, they arrived at home within 7 minutes. ALL of the water damage was caused by a Faulty ILLEGAL Toilet set up in the 3rd Floor.
He told Fire Dept he would come in the Morning. Meanwhile Son and I stayed up all night and were stuck at home with no running water, no toilet and stuck in one room away from the falling debris and water, and with no where to go.
He arrived at Noon. He was very angry and inappropriate, he blamed me and my son for this Disaster and said we had to get out right now. Period. He was rude. He made not one inquiry as to our Health, Wellbeing or Safety. I informed him that we had paid Rent and Water until the End of May, and that because he had refused to write a Reference Letter for NYC we had already lost two places. I informed him we had no where to go and would have to go to a hotel. He offered no shelter assistance , even though our rent is paid through to June 1st. I asked to have SERVE PRO Water Specialists come to the Home as I had already filed Renters Insurance Reports and SERVE PRO gave me a claim number. He told me that they were not allowed in the home, he was adamant and angry. I said that I wanted to try mitigate the water and debris damage to my belongings, but I also pointed out that this would help the home as well. He refused, and stated we had to be out within 3 days, and that he would bring his own people in to deal with the water. He said if I wanted a reference letter I would have to sign a "Deal" and "agreement" with him and get out now. I did not agree to these conditions and did not answer him, I did point to the toilet and said "That is Illegal, NONE of this would have happened if there had been a Shut Off". I then went downstairs and continued clean up.
At 3PM he arrived to home with a Broom, dust pan, 3 towels and one dirty stinky wet mop. I had only spent two hours away from home and had been already cleaning up since early am. ( I only took break to take son and pets to hotel. ) I had basically been up all night fighting the water and falling debris. I had been bagging up debris and dragging wet boxes and belongings to yard, I was informed not to do that as he was concerned about the grass. And he also repeatedly expressed concern about the wood floors. I said nothing. I kept working quietly removing all the wet stuff, I removed ALL the heavy wet FD tarps by myself and empty debris into garbage bags . At first I was dragging mattresses around the house to try to dry them, eventually I took them to the curb. The debris kept falling from the ceiling, it was heavy and filthy.
At 4PM he walked with his plumbers to the Local ACE hardware and got the Proper Replacement Parts for the toilet. Then they came back and fixed the toilet. Landlord swept one bag of debris up , claimed he was ill with sinus infection, he put the debris bag in his car. It was unclear where I was supposed to put the wet debris , porch was an option, but that was where I was trying to place dry stuff. By Noon the stench from the wet debris and plaster was disgusting. I continued to navigate around falling plaster while I cleaned up. He was in attic with Plumbers chuckling.
At 6PM he came down and said he was leaving, and tried to hand me a MOP and get me to"Lightly Mop" the floors before I left. I looked at him and carefully quietly explained that I had not eaten or slept in many hours ( since Saturday) and that I was going to the Hotel. The Mop is still on the backporch five days later.
During the Week I heard nothing from him, not a single call asking if we were ok or safe or had shelter. I did get messages expressing concern about The Floors. Not a Single Water Specialist ever came to the House. I cleaned out the house on my own working four days straight dawn to dusk, and alone. On friday the Renters Insurance sent over a team to help me finish, because I was too tired. And they packed up what was left, and I will go to their storage unit and finish the clean out of the wet and damaged stuff. It was not a very big pile. Almost everything we own was put to the curb, even many carefully packed boxes that were ruined.
Posted by enigma4ever at 8:38 AM

Email ThisBlogThis!Share to TwitterShare to FacebookShare to Pinterest
Labels: Landlord Negligence, The Mop, When Landlords Suck