Photos of the Flood Damage.... 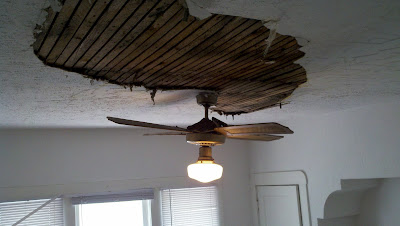 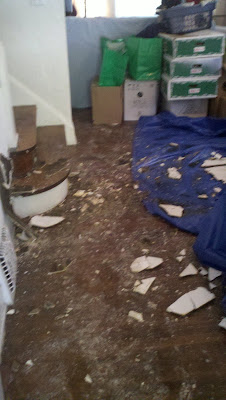 These photos show the Dining Room Ceiling falling and the fan hanging by a thread ? and the debris and water in the dining room. ( More Explanation below). I even tried to set up barricades with boxes and mattresses to keep water out of the front rooms, out of all our rooms there only two rooms I was able to keep the water out. My son's front bedroom ( although his TV Room and back clothes room and hallways closet were ruined). And the downstairs Living room, although there was some water-just not as bad as the Diningroom-here you can see the stairs and the diningroom floor. and the tarps. Under the Tarps in the dining room was all of my stuff packed for the move- my clothes, my books, my music, my favorite things. And some of Rob's books. ( we had a really beautiful library, two whole rooms of books that we had moved all over the country. That Library was Our Thing....And yes, the Tread Mill got soaked....and then some of the furniture in the basement got even more soaked underneath). The Front part of the radical attic did get some water-but I used a box spring to keep some out, but it was everywhere, I have to say Mattresses did work to save some of the rooms or absorb some of the water. I actually had waves in the attic and in the basement as it rained down. It was up to 8 inches deep in the basement by 3AM. The photos don't really show the water Raining from floor to floor, I had trouble photographing that so you could see it. But it did rain down all three floors.
****************************************************** 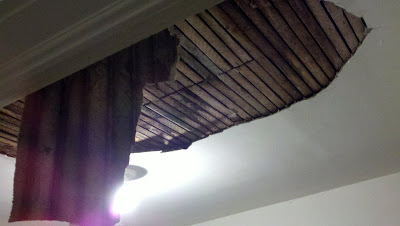 Ceiling in TV room under 3rd floor gave out within 30 min. Black water hitting everything. I was frantically trying save and salvage stuff, slipping and sliding and dodging falling debris. ( I could have seriously used a hard hat). The TV Room on the 2nd floor is....was our Family Room, it is where all of our Music, Films and Games and even favorite books were. It is where we watched TV, Netflix, Battle Star Gallactica Marathons. We were due Monday to start a DrWHO marathon. And it is where all of my son's games were, his playstation, all that gaming stuff that guys need to Save the World....and yes it is where the computers were, because we had just been watching Sunday Night TV when this happened.....I have never seen that much water rain down...it seriously reminded me of Seattle. It was like watching a Monsoon or a Hurricane in the House. I have lived through much and helped many disasters when I worked for the Red Cross ( quakes, hurricanes and floods), but I never thought I would go through such a thing and be fighting to save what matters minute to minute.... And the Landlord refused to come and shut off the Water to the House. And the Fire Dept even called him and told him to come and he refused. It's all on record, including my frantic phone calls to 911. I seriously wonder if the amount of water that flooded the house, all three stories and basement set a City Record. The Fire Dept - God Bless them, I am so so grateful to them, and I need to make them cookies. 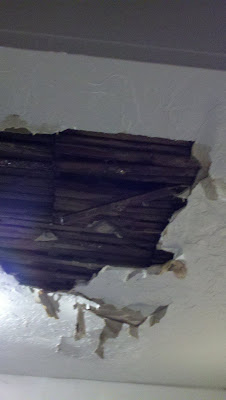 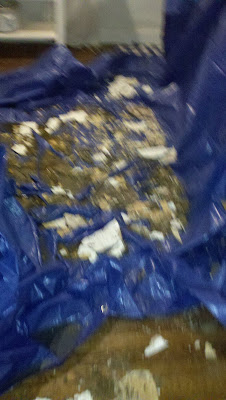 Email ThisBlogThis!Share to TwitterShare to FacebookShare to Pinterest
Labels: Flood Damage at Our Home

Honey, I'm so sad to hear about what you've been going through. That must have been so frightening. Relieved that you and yours are safe. ((((HUGZ))))

Good grief! I have been reading your saga.. Your landlord is a total jerk.. I hope this mess costs a firtune for him to fix.. Meanwhile, I'm glad you are safe & hope you find secure lodgings soon!

thanks D...
we are going to be ok..I have faith in us...and yes...we just need to keep on keepin on and stay strong....and get through this....thank you for your thoughts...very grateful...

Cindy....
thank you so much.....yes the Landlord is in trouble..he won't be renting my place for awhile...it might even be condemned...not sure ? at this point....but it is a mess....and surely not liveable at all...

Oh no, that was just terrible! The ceiling is indeed badly hit, but the good thing is that the firemen were able to help you in saving your artwork. It's good to hear that you are safe, at least.

It’s been 4 months since the flood devastated your home. I’m pretty sure that at this moment, everything is doing well. Although it may be quite expensive to replace your personal properties that the flood had ruined, the good thing is, nobody was harm in your family. Things like your television, thread mill and books can still be purchased and replaced, but the lives of your family members can never be replaced. I’m so impressed with the firemen in your community; they responded immediately to your needs and were able to save your paintings and artworks.

Very depressing! :( The flood left you with nothing but the memories of your home. I can see how the water seriously damaged your furniture and the home’s entire structure. Anyway, you seem to have a strong personality. I’m quite sure that you were still able to face this disaster with a smile. =)

What a dreadful sight! Floodwater damage can really be very cruel. The photoset reminds me of my basement back in 2011. It was Hurricane Irene who made it look like a deserted, messed-up gallery. Oh, the hazard of cleaning and restoring the chaos in the cellar!