Okay , I am a mom, and I have a teenage son and to be honest I am fricking horrified by the this latest GOP Stinking Coverup. And I am not fooled for a minute by this steaming heap of a scandal, this situation concerns HUBRIS, and how MANY knew that Foley had a PROBLEM BEING TOO "INTERESTED" IN CHILDREN, AND BEING TOO "FRIENDLY". In True Let's Protect the Pediphile Fashion, these men in suits have been protecting a predator in their midst, leaving Innocent, Idealistic Children at Risk in the Page Program in DC.And the situation has deteriorated rapidly, by the hour with the lies and the DENIAL piling up by the Fast Fingers Foley's Bus of Shame.

Someone should get these poor boys out of the way.I watched that video of Foley Meetin'&Greetin' the Pages, and my he is practically licking his damn lips with glee and anticipation. This is an issue about a Real Life Predator, it is not about being gay, or having an alcohol problem, or a traumatic childhood. Look at his ONE Sentence Resignation- not a single apology offered to his constituents . He snuck off to Rehab, I don't think that speaks to a Drinking Problem- I do think that speaks to guilt. A man that is not safe with Children and Knows it, and has been caught. 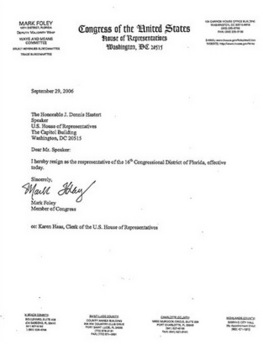 And why the Hell didn't ANYONE do ANYTHING IN 2003 ??? There are children involved, and they are far from home, and Vulnerable....Was Uncle Denny waiting for them to grow up? ( Foley wasn't) 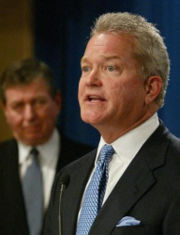 So here are Some of the Enigma's Questions for the Enigma Cafe...
1. WHY the Coverup? Because MORE have IM's and Emails and "Friendly Activities" to "worry about".

2. Is it at all related to the Abramoff/ PAC Monies ( being funneled by Preston/Gates/Ellis) - that were busy being shuttled around Red State to Red State- and the Money was used to HUSH.
( especially , just imagine if GANNON -you know Ol' Jeff or was it Dale Guckhart has Oh- God-forid-and - I -am -dying-anticipation PHOTOS????)
3. Did Fast Fingers Foley work SO HARD on the "exploited children"legislation so he could PROTECT HIMSELF??? OR ENJOY THE INTERNET- AND THEN LATER CLAIM (ahem- cough - gaggag) it was " RESEARCH"???
4.WHY did the FBI not investigate when it was brought to them in July 2006- WHO TOLD THEM TO STOP???
5. Does ANYONE remember the summer of 2001 and the CANDYMAN SCANDAL ??? ( AND ALL THE COMPUTERS- THOUSANDS OF THEM THAT WERE SEIZED IN FLORIDA AND TEXAS , AND YET NO ONE WAS EVER REALLY ARRESTED- ALBERTO HUSHED THE WHOLE DAMN THING UP....HMMMMM)..... I wonder....

Okay that is enough for this hour......by Friday you KNOW there will be so much more....
Posted by enigma4ever at 5:00 PM

Bastards! Every one of them, so full of themselves that they can not think of life principles or values. Self-centered, ego maniacs on the loose - in Congress! BTW, there are a few Dems who belong in that catagory as well. I'm not saying they were linked to Foley's case, they are just too arrogant and nasty. Whew. I feel better now. Sorry about that.

YEAH! What you said!

Oh c'mon Enigma... just adopt the attitude of so many Repuke Catholics: "Those poor priests/ congressmen were seduced by those parishioner kids/ pages." I'm sure any minute now, Hastert will uncover this: Stripper poles that the pages used to lure Foley to them.... oy vey!

That is how far this thing is being traced back to so far. Nine years and nobody put a stop to it.

I am just waiting for the first confirmation that Foley actually succeeded in getting one of these young men to have sex with him. I mean he cannot have come up short every single time.

And when that does happen, this thing is going to explode like a nuclear bomb in Washington.

Latest from Druge, the pages played a prank that went awry. Were now into the blame the victum brought to you by the Fascist Nazi's of the Christian Mullahs and their propagandist.

What a bunch of EVIL VILE people.

Thanks for the support. I just posted on my problems with Blogger. Nice layout of what's going on in Congress with Foleygate.

This is going to get a whole lot uglier- tonight Thursday- FOUR More Pages have come forward to ABC...ooooops.

( AP has more coming as well tomorrow)
Love Everyone's Comments....It's ironic in a way...
I mean how can the repugs NOT be angry as us Liberals- don't they have kids...and cough....VALUES????

But is up to all of us NOT to let the Repugs Bury this - or Dick and George to start another warfront project as a New Distraction....

Keep Blogging it good folks....all of you....You are the Light. You are the Hope.

wow. Great coverage, thanks for the update.

Hi Hon, this is the first chance I've had to visit your blog. Boy, you have a lot of links you keep an eye on, I don't have that much time.

But I look at it this way, you are doing a lot of my work for me. God deligates, has other parts of the spirit do things.

"In many ways I am woman without a country right now."

Yes, how true, looking at it properly, you have been taken over by the Roman's. And the Eagle has turned ugly and sent overseas. Hang in there, keep up the good work. Hugs. Love.

I've even heard a few Repugs calling for an end to the page program, which to me is appalling. Being a congressional page is a merit program, and an honor for these kids. Punishing the young people for the iniquities of a few of their elders is reprehensible, to say the very least. Not to mention the notion that somehow we shouldn't demand that teenagers be safe in the professional environment where THE VERY LAWS OF THE FUCKING LAND ARE MADE!!!

The only and proper course is to investigate, punish the WRONGDOERS, including those who enabled by their silence and coverup, and move forward. Not to extinguish an important educational program for some of our top young scholars.

Man, this pisses me off!

Open the flood gates, wash the vermin out!

Gryphen has a good point -- can Foley have been so inept that he failed to ever get beyond e-f*cking?

and here's another question: where are the parents of these kids who were being solicited? don't tell me they weren't outraged by this creepy predation of their kids. I would've expected rita cosby or nancy grace to have had obligatory exclusives with the angry page parents by now. Not to be too cynical, but is it possible the unoutraged loyal-party parents are looking forward to sporting bumper stickers like "my honor student was E-f*cked by Foley" ???

You're probably right, enigma, we'll be hearing a lot more on Friday, maybe enough to finally consign that blue dress to the dustbin! ~~ D.K.

Breaking News: Speaker of the House Dennis Hastert, mumbling in front of the cameras, said "I didn't know anything, really."

His aides say that Hastert doesn't ever know anything, really.

WB ... nice to see you blogging again, Enigma. I visit the Cafe Daily.

The Foley scandal is an issue which violates the core rhetoric of the Republican Hypocrite Party about representing "Moral Values."

It has the potential to cause many Christian fundamentalists to either stay home or vote Democrat in November.

Since this is the GOP's core voting bloc, Republicans will either try and switch the message by blaming the Democrat Party or empahsize the economy to revitalize their base.

It won't work for two reasons. Clinton isn't around to kick anymore and disatisfaction with Bush extends beyond the Christian Right to fiscal conservatives.

For more on this read my latest Column, Who's Your Daddy ?

Also, I noticed on Friday a Democratic Congresswoman, Stephanie Tubbs Jones, a former judge from Cleveland will be serving on the Ethics Committee investigating Foley.

What can you tell us about her, Enigma ?

Whelp..we'll see if the Enigma can comment here- all day I have tried to comment back as I pour the Coffee- but Blogger has not let me...odd...must be more Beta trouble...


COSMIC: I am sure that folks will head your way next....and yes, I don't doubt that Repugs- real ones- like Reagon Ones in California and Goldwater RePugs have had it with this MESS.....to answer your Question about Tubb-Jones- she is indeed a Strong Legal Mind- and smart...and not going to take a bunch of bull.

DJ: yeah, right doesn't know " anything"...hmm, bet he will be denying he said that at some point....

DK: yeah, what a bumper sticker!!!...and the parents- hmm, I think I might indeed blog on it later...cause there is indeed a whole subject there...

MEL: Yeah, WE all should be Very Pissed....THESE ARE CHILDREN....AND THEY WERE VICTIMIZED BY A PREDATOR, and the Enablers that ALLOWED and CONDONED IT AND HID IT, have committed Crimes...IT IS THAT FUCKING SIMPLE.....

BBC: thanks for coming by...When I said "woman without a country" , I meant it - WE THE PEOPLE has been shredded as a concept by this Criminal Bushco Regime....we all need OUR COUNTRY back...enjoy the Blogroll- visit others- learn more and share- we need to communicate and share our concerns- and this government is indeed very scared of Bloggers and they should be- there is power in staying Informed and Communicating...Power to the People....Time for the People to Show the Criminals the door....

Glenda: Good to see you....miss OZ....but PeaceTrain is awesome- so keep up your great work...