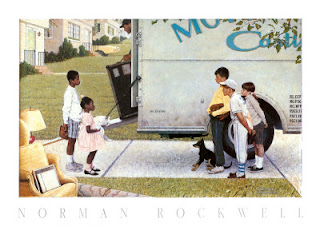 *******************************************
Is it 1958 or 2008 ?
*******************************************
So last night was the West Virginia Primary, and as usual I liveblogged it- and I do this because I want to keep a record of this season...and I also do it so we can vent, share and talk to each other. I Liveblog the Debates and the Primaries, and sometimes I vent and sometimes I cuss, and I try to keep it Real. For the most part if anyone wants to go back and read my posts, they can see that I have been fairly polite about Hillary, and actually said very little. I admit that this week Hillary with her "Hardworking White People" Statement trampled my last nerve- for good. She has pretty much crawled through every patch of mud that she could during this Campaign season, and created a Festering Wound of a Democratic party at this point. And this past week she decided that Racism is her Best and Favorite Platform. And yes, Obama Supporters, including this Obama Mama is against ANY AND ALL RACISM. PERIOD.

So in the Post the Night of the West Virginia Primary I had a visitor in the thread..( he has only been by occasioanlly in recent many monthes actually.) Yet the tone of his visit became clear, and that bothered me. And he has been blogging on his own blog about the problems with Obama supporters- if I had known THAT I would have seen what was coming....BUT I did not. So after a few snitty comments by him I went and read his blog and realized that he came looking for a fight. BUT he claimed he wanted to talk Unity, but if one read his LATEST post about What he thinks of Obama Supporters they would see that is NOT why he came to visit. ( I hate to mention him , but he has made it clear that I am a problem , and I need to be able to defend my blog, I think that is my right).

So I will say what I have said before- this Blog is for people that are rooting and working to support Obama.It is actually for anyone, but it has indeed become a refuge for Obama People, because some other blogs have not been as welcoming these past few monthes. And there are some that visit and are letting go of Hillary ( I know who you are and I am glad to see you again). I don't like it when Anybody comes here to pick a fight with me or my readers....I am not cool with that. I have avoided many blogs for monthes- so I would not piss off Hillary supporters, so this blog has been my main Refuge and I also know it is a refuge and retreat for others....If I post an open thread and say that it is to Vent ( usually about the crappy media) that is MY choice...and I also do it because I am not into have Arguments and Heated Discussions, other blogs do that kind of Forum, NOT mine. ( I admit that in the thread last night- I did indeed get heated- because this is a serious issue as far as I can see...and frankly, it is my blog....and If I support Obama- you can bet I will be supporting him strongly.) And yes, I blog about the Clintons and how they have campaigned- once or twice a week I blog about what they have been doing State by state, and about what I honestly have been watching as a Blogger, a Mom, and as a nurse. That does not make me a Bad Hateful Person ready to be judged...it does not Make me a Bad Democrat either. It means I am Worried about Our Country.

Unity is about People respecting each other, and not going to other blogs and picking fights or attacking the Writers or the Blog of another.....or Insinuating that People that Support Obama are not smart enough or trying hard enough to Unite the Party...THAT is far from the Truth. There will have to be Healing, but the Healing will start once Hillary leaves the Race and stops her Hatemongering and Fearmongering and her WhiteBread Campaign Strategy, which is angering alot of people , rightfully so. She is Running the Campaign of an Bitter Elitist White Woman, and she has been since South Carolina, like it is 1950 and she NOW is pretending it is based on "Values" ( How Rovian can she go ?). She and Bill have divided this Country like a Broken Pie, so before Unity is Embraced, they will have to show that they are ready to facilitate the Healing. They have spent months speaking divisively and negatively about many people and states in a destructive manner.Healing is about Forgiveness, but there has been some Unforgiveable Behavior that needs to be addressed.

It will be up to ALL of us in Blogatopia to find ways to Heal this Party , but it starts with People behaving with Respect and Integrity...and Speaking the Truth....And that Means that Racism, used as a Campaign Strategy has to be Faced Head On. and Not in November....NOW.

*{Click the title" Which Side are you On" Natalie Merchant}*
Posted by enigma4ever at 12:07 AM

Just to be clear I never mention other blogs or bloggers by name as a problem. BUT this crossed the line , he mentioned my blog in his Thread on his Negative Post about Obama supporters saying "have you seen what is going on at Watergate Summer", and THEN he came to MY blog and picked a fight- and was off subject from what we were talking about....

we were talking about Racism issue in conjunction with West Virginia....and then he came and said we had a problem with Unity....etc.

The fact that he came and Targeted my blog after mentioning it on his blog FIRST is uncool...and not okay....so I mention what he did to be really clear....that is NOT what we as a Community are about....

And I have spent monthes trying to create a place to talk - not fight....and that has meant much troll sweeping....

IF any of the regulars want to tell me that I am wrong to be concerned that he targeted a fight...that is fine....but I don't think it is...

and Unity is about Being Honest...

FOR THE RECORD- I WAS NOT RUN OFF BY THE DISCUSSION THAT ENSUED-- I JUST WANDERED OFF TO OTHER THINGS.

AS FOR THE BICKER PICK-A-FIGHT MODE,
PISHAW!

I HAVE PROPOSED A *HARD WORKING WHITE VOTERS FOR OBAMA* COALITION.

I AM LISTENING TO PUNDITS ON PBS SAYING OBAMA WILL BE THE NOMINEE.

YESTERDAY'S ENCOUNTER WAS JUS A RIPPLE IN THE POND....

thanks fran..
I love the bumper sticker idea...

you heard it on PBS...wow...I was watching a special there about Everest- but I got cold and had to change the channel...

accidentally went to FOX and Rove was complaining about the VENDING Machines- it was priceless....

I am a working class white woman for Obama. Can I get that bumper sticker soon?

E4E, I saw that Everest special to the end - mainly because I'd met Scott Fischer at the International Outdoor Travel & Adventure Show in Chicago prior to that climb. Then he came into our office, promoting his company, Mountain Madness - specifically about why they were the best choice for doing Kilimanjaro climbs - but that we could also sell clients on the upcoming Everest trip. So I have been obsessed with that 1996 Everest climb since it happened; and all climbs since. I sort of get why they do it, but I also sense that the Mountain doesn't much like it.

I don't know to whom you're referring, but it would make me wonder if that person actually supports either Obama or Clinton, really.

Xdell:
It is in the thread below- it was a sad thing- a friend that I thought I knew....and I don't really know who he supports....but it should not come to this....we need to find ways to be supportive of each other- but Hillary has created a divisive atmostphere that is concerning...

DIVA:
my ex was /is a mountain man- iceclimbing etc...all of that...I even tried iceclimibing and snow shoeing thanks to him ( I love snowshoeing...iceclimbing - not so much....)WOW...that sounds so interesting - and that you MET them....very cool....Seriously I got chilled watching it- and it kind of bothered me....( I had some close calls with the EX on adventures- maybe that is like Flashback worries for me...who knows...)

Diva I really love all that you know about travels..When I hit Lotto someday I am going to have you plan my Big Trip....

This whole primary season has resulted in some hard feelings back and forth - let's hope it dies down when Obama is the nominee and people really start paying attention to what McCain says.

The truth is if Someone comes and picks a Fight and then goes back to his blog and publicizes it - that does indeed create hard Feelings...I don't like anyone coming here to Judge, Pick a Fight with Anyone Here , or Create a show so they can USE it on their blog and that is what happened All because :
(1)I Said that Hillary had behaved in a Bigot/racist fashion.
(2) I have done nothing to Hillary supporters...and done nothing to hurt them..because they too have suffered 8 long years...
(3) If on my blog I want to say that Hillary is a racist- or bigoted that is my choice....But I also don't think someone should come to someone else's blog and tell them how to write or what to say- that is censorship ? I would never go to his blog and tell him what to say- but he did it on purpose....it is was uncool...and I had not said a word on his blog....in monthes...