Best Obama Photo of the Week.... 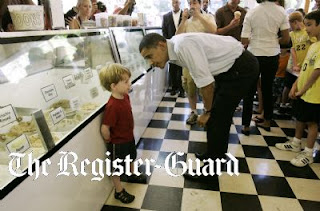 "There comes a time when one must take a position that is neither safe, not politic,nor popular,
But he must do it because his Conscience tells him it is the right."
MLK

This photo was from an Oregon Friend...when Obama was in Oregon last week...It has a real Norman Rockwell quality..I love how he is talking to this little boy....I was going to finish doing a bloground up- but I am doing it tomorrow...Over at Utah Savage ( or Madam Savage as I call her) she is asking people's VEEP pics- really good discussion of WHO would be great with Obama...Down below I am just taking a break with the Beatles...trying to feed some souls...well, mainly mine...I think yesterday shook a lot of folks..not just me...

The Music Video linked to the title is "The Story in your Eyes" by Moody Blues...really amazing live version...

**{ New strategy for dealing with really rude people: if you leave a really offensive horrible comment, I will leave it for others to see- so they can see WHO you really are....Deleting just doesn't work..}**
Posted by enigma4ever at 8:00 PM

Remember that, "United we stand - divided we fall!"

Atleast someone else uses coffee as a spice.

Just found this link to your website while on Lydia Cornells site and you have an amazing gift.

Future:
I was going to Just Delete you, but I need to really clear. I am a Honest Caring Person, you had NO right to come here and say what you said. NONE. I have to delete your comment later because it is Dishonest, It is not right to call Someone a "Hillary Killer" because they support Obama, I don;t know where in your conscience you thought that was okay. I was not trying to cause a problem on another blog- I merely asked you to please read and listen to her words, it was a fair request. Your Racist Hatefilled language and use of the F word screamed at me were really not needed.

You should be ashamed of yourself. I have done nothing to you or against you. I simply made a comment on another blog. I did not come and heave such horrible language , nothing like this.... I am leaving your comment so people can see WHAT you are really like and WHO you really are...

And frankly I am tired of deleting this kind of garbage- When People do stuff like this it is Hurtful...harmful...and not needed....

THIS is what I am worried about as a person, that in no way makes me a Lunatic...it means I have Humanity, empathy...this IS WHY women bloggers that support Obama have been dropping like flies...

Trevor:
thank you for saying that...I really appreciate it...It has been a rough day here...Please do enjoy this blog and I have another little blog called the ENIGMA CAFE over on the blogroll...there are many wonderful people here...good souls, thoughtful...

Daniel:
I will keep hopemongering...I have to..and I am hoping and praying for some Unity.....I am hoping for healing.....we have Problems here as you can see....

Really Good Show on PBS tonight about Unity/and HOW to Fight Hate Crimes....and that standing together and being supportive of each other is important...it is about fighting Injustice...it starts with Words...

Good photo of Obama and the child you have posted Enigma.

That would make a good cover for Time.

The chicken marinade sounds amazing. Do you grill this? Yum.

Diva::
bake, grill or broil...all good, as long as it is marinaded all afternoon..and the oranges are good and juicy and sweet...also Gilroy Garlic- nice and sweet is the best...like drooolable...sigh...

Larry::
It would be good on TIME..I did buy TIME today...the one with the really good Obama cover..really nice photo....

Jeeze, who pissed in his corn flakes? What a nutjob. Dude, up your meds.

Hey there DrKnow..
MrPissed off Future was deleted...I am sorry...I was trying to let him know that he went too far...otherwise sorry about that...it's gone now...Now about you - how are you..

Thanks for the Moody Blues moment. I know quite a few folks in that audience! Not me though. I couldn't afford to travel to London for that particular one (or for any other reason!)

Glad I got here after the troll droppings were mopped up. Sometimes leaving it undeleted doesn't work either. Depends...

Blueberry:::
I cleaned it up...I hope it works...I saw this Moody Blues and remembered that you like it...yeah..London..that woud be nice...for any reason..oh well..Have a good night...

What a great picture! So endearing.

BTW, Enigma, you have mail.

I managed to miss whatever happened here because I was out last night at the theater and then the comments were removed.

Based on past experiences with the Hillbots, I think after Hillary invoked political assassination, they've been reduced to complete and utter mindlessness.

Attack the messenger, they say you hate women if you don't support Hillary, criticize her voting record and you're a misogynist, and blah, blah, blah.

And so it goes. I just don't have the time or interest in them anymore. There's an election coming and my focus is helping get Obama elected president.

Great picture of Obama with the little boy - and the recipe sounds good too!

"I have learned that when you are campaigning for as many months as Senator Clinton and I have been campaigning, sometimes you get careless in terms of the statements that you make and I think that is what happened here",

hopemongering.. you 'own' that one E, great wordsmithing! (see? no wonder I attributed that to you earlier[s] )

Obama is the man1 Remember when Bush was running claiming he was going to bring civility back to Politics and Washington.
Yeah, it has never been so dirty. I believe Obama can and will do it if given the chance.
I am barbacuing a marinaded tenderloin today as a warm up but tomorrow I will barbecue a couple have chickens. Enjoy that chicken!
You guys have a nice day!

I have a photo on my blog background of Obama bending down to talk to my two kids - of course, I also have one of him holding Harrison. Harrison's look of glee at being held by the next president is priceless!

Got here late folks...sorry...Need to get caught up...Hope everyone is having a good holiday weekend...


Robert:::
I love the photos of your family with Obama...Wonderful- I told people to come see them..and I am telling them again...go see the photos..they are amazing...( the little boy in this photo looks like my son when he was little...very serious little guy...)

Ingrid:::
Thanks...I have been saying it since about January...and then in February Obama was saying it at rallies- so it made me laugh...it's catching on ;-)

Diva:::
I am still soaking my chicken for tomorrow...meant to cook it tonight....but didn't...coffee, sweet garlic...and I added some basil...and I found fresh mint in the backyard so now I threw that in...

Jamie:::
I think we can just move forward..and try to heal and mend..and look for the Light and spread it...Hope your weekend is good...thanks for the laugh the other day...( I forgot to thank you...)

Maui:::
thanks...have a good holiday...I loved this picture too...and the feel of it...kind of nice after all the big rally photos just to see him as a dad...talking to a child ;-)

Christopher:: ( this is a rambling answer...sorry..)
I think some will come round ...I think there are some that are sad, really , dissappointed....and we need to make them feel welcome and let them know that we all want to beat McCain.....I actually do believe in Unity...that we can heal...I am a nurse Christopher...I believe wounds can heal.....The Ones that are hatefilled- yes , there are ones out there that are...I am not sure about what will happen to them...or if they really will heal...I can not worry about them ...or try to persuade them ....or even help them.....I can only focus on what I can do...I got hatemail about my RFK post and I felt that maybe I should step back and think about how I approach this....maybe I need to stop expecting so much from her..or expecting what isn;t there...and also I know some of her supporters are not rabid, but disillusioned....and sad....I don't want them feeling displaced....Now the rabid ones I will just avoid and hope they come to terms with it somehow....I hope that makes some kind of sense....I would rather Fight McCain , and McBush than fight each other...the DEM on DEM hate needs to be healed somehow....I hope you understand what I am saying.....namaste...