MEANWHILE DOWN AT THE BEER BARONESS ESTATE, McSIMPSON IS INTERVIEWING POTENTIAL VEEPS... 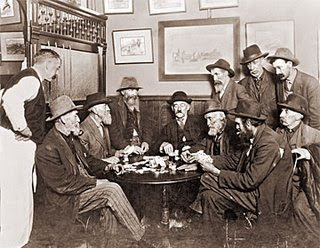 Okay you get the idea, I am going to call him McSimpson for this weekend, because he really reminds me of Granpa Simpson. I mean he did not vote for the VETS this week, is he such an old man that he is hording sugar packets in his shoes and getting Cindy and his Mom Mixed up. WHY would he not Vote for the Vets? So about the Slumber party...Seriously What do you think they will talk about ? And Why wasn't Lindsay Graham invited ? Where is Joe Liebermann - hiding in the Bushs ? And where is Huck, after his stellar (cough) "performance" at the NRA I would think he would be a shoein for the VEEP job....WHO do you think he will pick ?

[Breaking News::: Thursday Eve, he had to Break ALL ties with the Two Leading Radical Church Leaders he had sought for many monthes...Parsley and Hagee...so in just a matter of hours he pissed off the Military Families and the GOP Religous Families.I think that once the DEMS are able to get themselves organized and resolved, watching the Repugs struggle with their idenity and image might prove very interesting...]

Email ThisBlogThis!Share to TwitterShare to FacebookShare to Pinterest
Labels: But No Huck...darn

( after he voted against the GI bill...72 voted for the VETS, and the military to have what they need and deserve...how will he justify this ?...so I had to sit down and write a snarky post....had to be done)..

Have any blogs for the Round up later today ? email me at enigma4ever@earthlink.net

I'm still dealing with the news here the the hubby of "I won't throw in the towel" Hillary is actually lobbying for the VP position for her.
I know as much as anyone how complex politics is, but blatant still knocks me every time.

Cart:::
It is unreal....the ONLY person who is more deluded than Hill is well, yes, Bill....they are planning rallies in florida and DC to demand that the illegal primaries of Michigan and Florida be counted- so that she can acquire the votes, yet that would be illegal- and questionable math at best- she also is about 31 million in debt ( that we KNOW of)....Sooooo on she goes....on her egomanical quest, blinders and rose colored glasses firmly in place....the Media here doesn't know what to do even..( CNN of course if still fawning her deeply..)

It is not like anything I have ever seen...Robert over at Left of Centrist has Obama's possible VP choices that he is looking at...

The only criteria needed for being the Vice Presidental candidate for Mr. Senility is to be Greedy, Arrogant, A Failure and a Warmonger.

Billary is making the rounds, inserting himself in Obama's veep selection process before it has gotten off the ground.

Now that it's become clear the Borg Queen is not going to be the Democratic nominee, the Clintons have been reduced to trying to hook their fortunes and future to Obama's rising star and accept a number two spot.

Obama needs to stand tall and strong against the powerful Clinton machine. As a nation, we need a clean break from the tyranny of Bush/Clinton. If Obama gives in and puts the Borg Queen on his ticket (I don't think he will), he will lose much of the support he's enjoying right now.

I think that McCain really wants his spiritual advisor, Ron Parsley, to be his running mate. Then they'll make Hagee the Secretary of State.

I just listened to CNN Dr Gupta give the run-down on McCain's health. Holey-Moley! They keep stressing how well he's doing "for his age", but man-oh-man, it doesn't look good to me. Six different deadly melanomas (not the same one recurring) & now a squamous cell one to deal with. Doctors recommended he wear a mask when out in the sun, but he won't do that. Thyroid tumors (does that explain his bulging jaw?). HBP & cholest meds. Father & grandfather died of stroke/heart disease in their 70's (he always acts like his 96-yr old mom is his only health predictor). He complains of vertigo when he leans back to put in eyedrops. Terrible joint damage; he's gonna need both shoulders REPLACED soon. Personal anger issues.

Oh & to top that, he takes Ambien because he has sleeping problems. Do we really need a prez taking Ambien at 3 AM? When I take that, I am out for 8-hrs, and I mean O-U-T, out! (this would make a good campaign commercial, don't you think? intersperse shots of the Kennedy who rammed into a concrete barrier at 3AM, trying to get to congress to cast his vote, a total Ambien dream, with red telephone ringing & McC zzzzing, bleary-eyed botoxed beer baroness picking up ph, dropping it back in the cradle & janking the jack out of the wall).

I've set the DVR for "Recount". I don't know why I am looking fwd so much to reliving this nightmare, but I am!

The last couple days especially with distancing himself from the military yesterday, His finally throwing overboard if Lobbyists, finally being called out in his Religious advocates wanting to obliterate Islam, on and on, McCain is starting to self destruct and when he debates Obama that will finish him off!
You and 6-6 have a nice Memorial Day weekend!

Well now Hillary has just added a new reason for staying in the race even though for all purposes it is over for her.

She invoked the assassination of RFK as being another reason for staying in since the only way she could win is if something happened to Obama.

She may have been hoping for some kind of scandal, however to invoke RFK being murdered is outrageous.

The Super Delegates should end this now and force her out.

By the way this is the third time now she has brought up this example and its only a week since Huckabee's comment before the NRA.

AnonP::
I did not know about this until 5pm- I wrote the post above...there is no excuse for what she has done - absolutely the WORST thing that she could have said...

DrKnow:::
I think that we should ALL watch RECOUNT on May25th- HBO....

Patriot:::
thank you - you also have a good weekend...and yes, McSame is unreal...explosive...

DK:::
I am going to blog about his health- of course I am....but your concerns are all vaild and worse...

DIVA:::
ahhhh you make me laugh...oh wait...that could happen...Rev Haggard was Bush's consort all of his presidency- once a week...when he was not in rebab...