Nelson Mandela, One of the World's Greatest Leaders to Survive Apartheid, is on Bush's Terra WatchList, and Is Not allowed on US Soil... 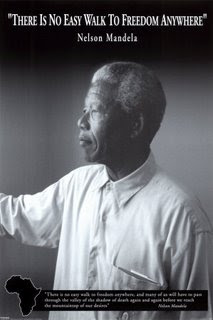 This man is one of greatest leaders in the world, there is much we can learn from him and much that can inspire us. We are a Country where hundreds of thousands are on Watch Lists, and NO FLY Lists, and have been denied the right to communicate with those in other lands, travel and have been spied on illegally. He fought a Horrible Regime in South Africa, and suffered for that Struggle. He was imprisoned for his Leadership of the Protest Regime, as a lawyer and supporter of Ghandi's philosophy of nonviolence, but his group did finally arm themselves...this change in strategy did lead to his arrest...and imprisonment for 27 years. Many great Lawyers and Political Activists were imprisoned and killed. Eventually there was Regime Change , partially because there was change in Leadership...it took many years, and in 1990 he finally liberated. Then he rose to leadership, and under policies of Reconcilliation and Healing, he was able to finally bring Regime Change in the 1990s to South Africa.
*********************************
I take this matter Very Seriously.....I am on Watch Lists because I fought a Large Chemical Company, as a nurse, as a mom. I fought the Company by exposing their Criminal Activities to the Government, the Federal Government. My Mighty Weapon was a PEN ( and a computer ). I let the Federal Government KNOW that millions of pounds of Dangerous Contaminants and Hazardous Substances were being dumped on families in the Northwest and I documented the Dumping and the Damage to the people.And as a way of Thanking me for my Concerns I was placed on Lists by the Bush Regime.It means I can not Fly. It means that when I shipped my belongings from the West Coast, that Homeland Security went through my Pods. My Belongings were rifled through, and things were stolen, clothes and shoes, and BOOKS. My Science books, my books on religion and Buddha, and Ghandi, and yes , books on MLK, Robert Kennedy, and yes even my Mandela Books. My Grandmother shared the same birthday as Mandela, those books she gave me were precious.Books on History, Freedom and Regime Change.
*********************************

*{Click the TItle, it is Peter Gabriel singing at Amnesty International Concert part of the Conspiracy of Hope Tour 1986 in the 1980's still trying to free Mandela....many of us campaigned and wrote thousands of letters back then....trying to end Apartheid and the imprisonment of thousands. THIS Song I think is the greatest Protest Song ever, and it is sung with sweat and tears, and Peter Gabriel yelling out. It is very moving watching him sing and raising his fist in protest, and then watchin 80,000 People join him, with the Bag Pipes and Scottish Drums serenading the Pain of that moment.The Song is BIKO, about Stephen Biko, another prisoner that was imprisoned and killed. It is VERY moving video.....and timely to remember that REGIME Change is needed here....NOW}*
Posted by enigma4ever at 4:43 PM

Mandela on the no fly list? You gotta be kidding!
this admin is so backwards it's not even funny.

He is not allowed to set foot on American soil....or fly here....or visit or have tea with the King...

( Rice interviewed about it- said it was a "mistake")

Wow look Enigma, you and Mandel have something in common.

Doesn't that make you feel special?

Gryhen:
yeah...
I guess...
Someday maybe he and I can fly coach together...and talk about the Bush years....

but hey I get off it in 40 years...
maybe then I can fly to Alaska and see what it really looks like....there are only 2 states I have never been to.....Alaska and Hawaii....

Anyways soooo good that Bush is keeping us all soooo safe...

oh and just to reassure people...
I was on "Lists" LONG before I was blogging...

so I don't think they put bloggers on lists....

I just assume we're all on it.

We're liberal bloggers who detest the Bush junta, oppose he and Hillary's Iraq war and we blog.

Jim and I are going to Toronto in July to see the Yankees play the Jays, so it will be interesting if I encounter any Bushit at the US border with my passport.

I'll sue everyone within 1,000 miles and retire to Malibu. The fucktards.

sigh...
I can not wait for Regime Change, can you ?

Damn enigma, you radical you.