DEAR MR. BUSH, YOU ARE A WAR CRIMINAL. 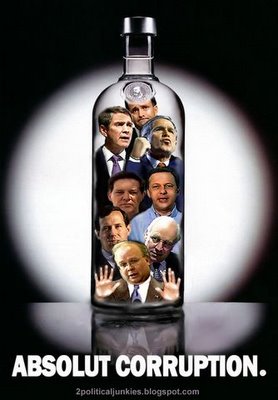 Dear MrBush,
I know that you and your henchmen don't read. I also know that you don't care that we all read and write letters and pay attention to What is being Done in Our Name. We are Still Americans. We value WHAT The Founding Fathers Set Forth in in the Constitution and the Bill of Rights. There was Nothing set forth by the Founding Fathers that precedented that we, as Americans llegally Imprison Others.There was Nothing that allowed Our Government to Imprison, and Torture Others Indefinently. There was Nothing about Renditioning People, Hiding , imprisoning, and Torturing them in Secret Prisons. There was nothing about Building Secret Harmful Prisons on Communist Islands. There was Nothing that allowed Our Government to Declare False Wars and to Occupy Countries Under False Pretenses.

I do not Live in Bushland, I do not abide your Lies or False Laws, or mianipulation of Real Laws. I Believe in Peace. I believe In Justice. I believe in Truth.
I believe that You will need to be Imprisoned and Impeached for the Coward of a War Criminal that You are.
I am a Patriotic American , you are Not.


( I have written to the UN and asked that you be Tried as A War Criminal. I will keep writing to them. I sent them 40 hours of Vidoetape of Katrina Refugees dying in the Streets. if I had Film of Gitmo- I would sent that. I pray the Red Cross Sends the UN and the International Court the Interview tapes.I pray that there ARE photos on CD's- just like there were or Abu Gahrib.)
Posted by enigma4ever at 2:40 AM

I am jealous of that pic!

i don't live in baby bush land either...thanks for the great post...

Good for you. We all need to start demanding accountability.

Love the picture of Karl.

I would love to stick them ALL in a Bottle now and throw them to Sea...

Bam! Hit them where it hurts, my friend! I am doing the same...

Bless you and your spirit!

Great work, E4E! Keep it up and we will turn this thing around. It's going to happen. I just know it. Whahooo! Guess you might say, the Bloggers are the only ones who "stay the course"! We have our battle plan and we are doing it.