THE MONKEY STORY THAT THE MEDIA MISSED 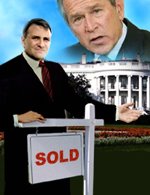 So here 's the thing- we heard much about Mr Allan and his MACACA bigoted insulting statements that he made on film to a camera man during the campaign. I kept thinking that I remembered hearing the Monkey phrase Somewhere else...but I could not remember where...oh...that 's right it was used by Delay and Scanlon and others in the Abramoff scandel- it is used in a Derogatory fashion to describe people that they think are worthy of being discounted but milked for money.Is that Rascist?
( Wikipedia- look up the Abramoff files...and read up on Grover Norquist and also Raplh Reed, Micheal Scanlon and Tom Delay- it was a common term amoung all of them.....)
Posted by enigma4ever at 1:04 AM

I think they hate poor people the most

Wow! I didn't know that. Sorta seals their personality profile, doesn't it?

Speaking of Abramoff, Bill Moyers just did a program on PBS, Capitol Crimes, that really told the whole story well.
If you missed it I think a lot of the show can be streamed here.

the moyers thing is 3 parts- you can catch them wednesdays i think. these folks are classicist, racist, homophobic and on and on. they disgust me and hopefully a majority of the country.

I can't believe how moronic these people are. UGH!!!

graeme: yup...there is no middle class anymore either..

BETMO& REsearcher- I thanks for Moyers head up- had no idea he was back-great- watched the Capital Crimes series- excellent...