BREAKING NEWS: SENATOR TED KENNEDY HAS BEEN DIAGNOSED WITH A MALIGNANT BRAIN TUMOR.... 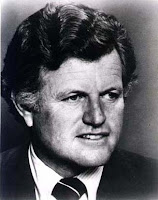 The news media announced that Senator Ted Kennedy has a malignant brain tumor,it will require radiation, and possible chemotherapy, and possible surgery. Many many prayers to the Courageous Brave Lion.

{{{{ This is very sad .....he really has been looking so good...but the seizures did sound very concerning....He has a wonderful wife, Vicky and so much family...this Dynasty, and this man has been such a part of American History...and watching him this winter fight for Barack Obama was so moving, it was breathtaking....On a more personal note,.....as a Whistleblower, his office has always been good to me and reached out gave me contacts when I was in the thick of that....and I can not imagine him not in DC fighting for The People....I hope and pray that he has the Gift of Time and as gentle a path as possible....namaste}}}

Email ThisBlogThis!Share to TwitterShare to FacebookShare to Pinterest
Labels: prayers and light

I admit that this weekend...this did cross my mind and I was hoping I was wrong.....it is a glioblastoma or gliaoma in his parietal lobe- that is not a great area...and can be rapid and fast growing..the parietal area can effect vision....and speech/language....very worriesome...I wish it was better news...

Oh! So sorry to hear the news. Kennedy has been a gem of a public servant. We wish him well, and know there will be an outpouring of support. My son just said "it's people like him that make me want to go into politics".
That kind of says it all.
We will hold him in the light.

I had not heard, wasn't going to watch TV til later. This is very sad indeed. I was hoping it was only his meds & not something like this. We need Uncle Ted, we've always needed him, there's no one else like him!

we can send good wishes...
ww.tedkennedy.com,

I'd not heard this. I'm stunned. I met Senator Kennedy shortly after he'd injured his back in a plane crash - he was in Chicago for a fundraising event for Congressman Mikva. He has been an effective Senator, and I hope he recovers.

I also met Senator Robert Kennedy when I was at Ithaca College. I used to think Bobby was the best of them, but after his years in the Senate, I think Ted gives Bobby a run for his money.

I've got a post up on him too, including a video (it's Ted delivering Bobby's eulogy). Bring Kleenex.

Just read that he has glioma, and the prognosis is poor. This is very sad news.

Diva, Blue, and others...
this tumor is in a difficult location, he will have radiation and chemo...it is good that there have not been other symptoms...he is a fighter...but he does indeed have a real battle ahead...

the county I lived in the NW was full of these tumors...gliomas..they are silent for the most part and fast growing and do come back...as much as he fought for Health Care for all of us...he does indeed have his own biggest Health Battle on his hands...

as I have said before , Boston , and Mass General has stellar medical care and advances...I am glad that he has all of his family with him...

I found this such sad news too. He has served his country for so long. I'm hoping for the best.

Okay never mind. I see you've done this one already. I have been very behind in my blog reading.

This is a horrible disease...I lost a friend to glioblastoma when she was only 36...and a neighbor of mine has this same tumor; he has to be in a nursing home now as it is affecting his mind and body. So sad...

He is a good and decent man, he has served his country well, he AND his family have served even though they could all have just gone to the pool and said screw it, they embody noblese oblige, those to whom much is given...much is expected...Some venal creatures will try to dredge up sins of the past, I say any man ANY MAN who has seen 3 of his brothers killed in service to this nation needs to have been cut some slack. His legislative record is second to none, I wish him peace and hopefully a recovery. That is one Irish American Democrats take on this
TomDem55

This is very sad news. My daughter was diagnosed with a Medullablastoma brain tumor at age 4 1/2 one month after my son was born.

Today, 22 years later she's still here. So there is always hope as all those other children who were diagnosed at the same time as her are no longer with us.

They all succumbed to their horsehair tumors while my daughter survived for which I am eternally grateful to the Lord.

If God is willing we will see more of Senator Kennedy on the floor of the Senate doing good for all the people.

Keep him in your prayers.

Thomas:
Thank you....I have nothing but respect for him as he has served for and to and with the People for so many years....

MAUI:
prayers dear...and hope...( now about the MEME- I hope that is what it is- I was already tagged- and big shock- I already did that..)I too lost my best friend when I was 17 in college- it was why I went into Hospice work ( off and on as an RN...but I take breaks..with other kinds of nursing..) But he has a battle...but he is a fighter...and that makes all the difference...and he has great doctors and healthcare...and family and all of us rooting and praying for him....

oooops something messed up the Mary and Maui Comments ran together....so sorry...

Kennedy is one of the very few who really tried to help the working and the poor.

From what I understand, the doctors don't know what kind of cancer they're dealing with yet. So there's a chance Kennedy will pull through this.

Teddy went home today so we can hope for the best he certainly deserves it after fighting for average Americans as he has despite what has happened to his family and his millions.

Yep, he went home today. Don't know what they'll do regarding an inoperable tumor. And here, my friends, is where I verge from the rest of you - I WILL keep Senator Kennedy and his family in my prayers. Yes, I do. I pray. No. I am not religious.

We are all praying too Diva....and sending much light to him...and his family....Praying is not always about religion...many of us are spiritual....there can not be enough thoughts and energy....and Light and good energy sent to this situation....it is what heals and mends hearts.....


*** {{ A foot note about the tumor- it might not be totally inoperable- it might be the location, or proximity to other problems- ie. a vascular problem, or too internally difficult to reach...but it might also still be small...I hope that Chemo and radiation is about giving him more time and comfort...and keeping function intact....He is in the very best hands and care through Mass General}}

This makes me so sad. One of my first memories is of being with my mom in Boston and meeting Ted Kennedy. I was five. I am thinking of him and his family and hoping that all goes well. He is a fighter and I know he can beat this.

Kennedy will have it extra hard with his age and the possible advancement of the disease before they caught it.

I too posted a Tears for Teddy piece. I've ben depressed and teary since. Pulled an old piece on the "Maverick" and reposted it today. It's rainy here and coldish, can't quite come to.

Hey All..
I am sorry I have not been very good about responding...have spent most of the day and yesterday feeling sad...teary..choked up...really genuinely sad...know this tumor and it's path too well...so I hear you...so sorry...so glad that he went home today...he should have as much time as he wants to go home and be with his family, his dogs, his boat...
I am sorry Savage...Angie..Larry..Diva.....I wish I had some wisdom...or encouragement....but I do think that we all are sending thoughts his way matters....good energy so he can with those he loves...and have what he needs...