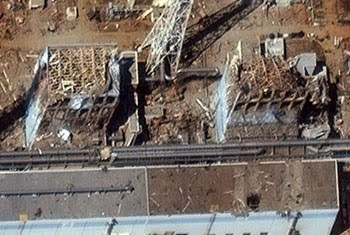 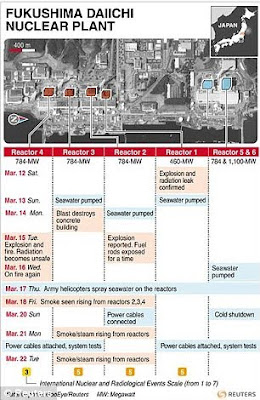 ACTUAL GRAPH SHOWING EXPLOSIONS, Blasts and Fires ( Guardian)
Note The Number of them and remember that the Reactors are only 200 feet apart. So Violent explosions could effect the other reactors. Do See that Reactor #4 experienced explosion March 15th, but may have been experiencing heat from explosions of #3 on the 14th. ( Do See Videos Below as they detail more of the events and damages).
~~~~~~~~~~~~~~~~~~~~~~~~~~~~~~~~~~~~
Day 22 4.2.11 at 11 PM EST :: It was released via numerous media that Two Bodies had been found dead at Reactor Number #4 in the Turbine Building. Media Per Tepco reported that these two young men died in the Tsunami that followed the Quake. They were 21 and 24 years old. Immediately within first few hours all media picked up this story and released it as is. Yet there are are some questions that need to be asked. The Weekend of 3.12-3.14 The Public was told by Tepco to the Media that ALL workers had been accounted for within the plant. Then the First Explosion happened the weekend of the 12th, still the reports came that all workers were accounted for. Then came the Explosions of the 14th, and still no reports of missing workers.

On March 15th there was an explosion at Number #4 and workers were finally pulled from the scene, and it was reported that 17 were wounded , injured and that Two were Missing. And the Status of those two Missing Workers has never been reported or revealed. ( It was reported by Numerous Papers, including The Guardian, NYT and Reuters. I have included the Links Below. The Missing Two Workers were even admitted to be possibly, or last know to be in Turbine Building of #4. It is Important that this be properly clarified as if these two Brave Workers did indeed Survive the Quake and the Tsunami to Lose their lives Fighting a Nuclear Situation, they need to be Honored and Remembered for the Heroic Efforts of what they were trying to do.

(1) NYT revealed that Bodies of Missing Fukushima Workers Found at Japanese Nuclear Plant had been found, but indicated that they supposedly died in Quake and Tsunami. ( No mention of March 15th Explosions or fire of Missing Workers from that series of events.
(2) CNN also covering the discovery of the Two Bodies, but no mention of the Missing from March 15th.
(3) Two workers missing after #Fukushima explosion, last known to be in turbine area of No.4 reactor via #AlJazeera
(4) More from Reuters on the Missing after 15th Explosion of #4, 2Missing Workers After Explosion Fukushima Tuesday March15/16-AND they were In Turbine for Reactor#4 .
(5) From the Australian 2 Missing Workers After Explosion MARCH15th via Australian/Reuters reported Missing, And they had been in/near Reactor#4.
&&&&&&&&&&&&&&&&&&&&&&&&&&&&&
VIDEOS Related to Explosions of March 15th and Status of Reactor #4 and Missing Workers::::
(1) This Video is by RT (Russia) and NHK Explaining Explosions at Reactors #2 and #4 on March 15th, and subsequent Fires, also shows the structures and the explosions and explains the huge risks of the Spent Fuel in #4 and efforts that had been made to cool it since it's cooling systems were knocked out. Title of video "Fresh Fire at Reactor #4"


(3) Very brief video shows actual Burst and Explosion at #3 ( March 14th or March 15th) But raises questions about the explosions and the damage.