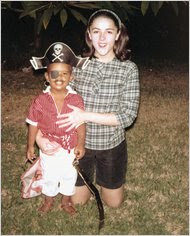 President Obama had an American Mama who loved him and raised him. I love this photo, it shows a young mom at Halloween. I loved that she dressed him as a Pirate. ( Of course now the Birthers will be presenting this photo as proof, claiming that he was being trained as a Somali Pirate.... or some other foolishness). I keep wondering if his Mama was here would the Birthers and Baggers keep hammering the bigoted rumors about his heritage ? Would they keep trying to rewrite his history of WHO and What and What Color he is ? Birtherism is Racism and shame on the Media and Journalists for not calling it for what it is.

Ironically if ANY of the Media did their homework and looked up the Laws or questioned some Citizenship Lawyers they would start to realize that the Birthers whole premise is Broken. President Obama was born to an American Mother on the Island of Hawaii. Yet if she had been An American traveling abroad and had had a baby, that baby would still be an American Citizen.
If any of the Media and Talking Heads had bothered to research Birthright Citizenship in Wikipedia they would understand that because of his Mother's Citizenship President Obama was BORN an American, period. Existing American Laws protect Obama and his Heritage and his Birth.

Apparently the Republicans are now embracing Britherism as an "issue" for the 2012 Election. First it was Mr.Huckabee, and then it was Mr.Trump. And now this week we learn that 46% of Republicans are questioning his Birth and Citizenship. And instead of the Journalists exposing this for the Xenophobic Racist notion that it is , the MSM has been continuing to trumpet the antics of Trump and Bachman.

I for one wonder at the Republican Convention of 2012 will they be handing out Tin Foil Hats or White Sheets ?
~~~~~~~~~~~~~~~~~~~~~~~~~~~~~~~~
This is the Link to the must read NYT article "Obama's Young Mother Abroad." ( Sadly the title alone will still feed the Birther's Wet Dreams...) Do read this article it will give much insight into our President, how he was raised and nurtured. Personally I keep wishing Someone would write a book on President Obama's patriotic grandparents. His Kansas grandfather fighting in World War II and his grandmother working in the War Factories of the NW to help the World War II efforts. There is no Real problem with his very American Story.
Posted by enigma4ever at 11:17 AM

Email ThisBlogThis!Share to TwitterShare to FacebookShare to Pinterest
Labels: Birtherism is Racism

Of course Obama is an American. As you point out, his mom was an American citizen. Case closed. The birthers (now led by Trump) are simply exposing their naked little peabrainstems. Maybe they need one of Trump's Weaves to cover those holes in their heads out of which most of their brain cells have leaked?

Like you, I'd also like to see more of Obama's grandfather's bio. Obama's mom and Obama himself inherited his distinctive chin! And wasn't his grandfather's brother (also a WW2 vet) at the 2010 convention, up on stage at one point?

good to see you back bloggin', Enigma!

Oh, White Sheets definitely
And let them continue to rant and rave about the President's birthplace we know it's all bunk, the folks who peddle this crap are always going to be with us...
Their detachment from truth, (a fact is a terrible thing to these people) shows their real agenda...
1) OMG the President is Black we must de-legitimize him
2) OMG the President is NOT like us
3) OMG the President's wife and children must be villified...
(sigh) but it's just 1/5th of the nation ...
Still we need to get the 47% or so that STILL DO NOT VOTE to VOTE
Tom

Oh, by the way, his mom looks SO YOUNG
So young...forever young...

Tom..
she does look so so young....and yes to your other comment...we are living through absurd times...

I remember when he won the election and he spoke of his Mother and that she would be proud of the way he ran his campaign. He cried when reminiscing about his grandmother and how she and his grandfather stood by him and stayed there when he was rebelling as a teenager.

I believe they are VERY proud of him and how he's tried to
navigate and resolve the "big mess" he signed up for. Although, I don't always agree with him...I surely wish him no harm and yes America...he's an AMERICAN!