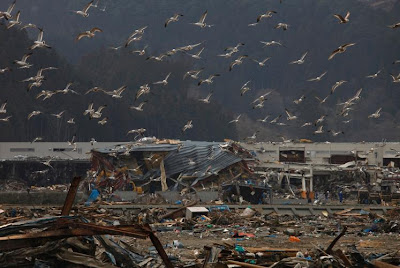 People are still being screened for radiation in different regions within 50 KM of the Fukushima Nuclear Plant Disaster
~~~~~~~~~~~~~~~~~~~~~~~~~~~~~
From Newsweek: Photos Japan: Inside the Exclusion Zone. Note the vegetation and also the stillness, no animals or birds to be seen.
~~~~~~~~~~~~~~~~~~~~~~~~~~~~~
April 5/6
Most of the focus of these posts will continue to be the unfolding nuclear disaster,but also will focus on the rebuilding and recovery efforts being made after the Quake and the Tsunami. The two situations do effect each other as evacuation zones shift effecting shelter, food, farming and fishing.
**********************************************
New Focuses and Problems as Week 3 starts, include clogging the Sea Water leak at base/foundation of Pit near Unit #2 which was resolved late Tuesday Night. Now the focus of concern is Unit #1 with a renewed leak of Explosion due to Hydrogen Buildup and an Injection of Nitrogen has been approved to prevent the explosion. ( Unit #1 has already had one critical event, an explosion on March 12th).**Updates will be posted on this issue later today.**

(2) IAEA was informed, TEPCO has been authorized to begin injection of nitrogen into primary containment vessel of Unit 1.(Note it is the Containment vessel-not the fuel rod pond that is now at risk, the containment ponds above and their status is not mentioned. The Containment vessel where the core is presents great difficulties, risks, so this situation is to be watched.
(3) From IAEA On 6 April 2011, the IAEA provided the following information on the current status of nuclear safety in Japan. http://bit.ly/eAehAv
(4) More from the NYT US NRC sees array of new threats from Fukushima Plant, this article explores what scientists are seeing and concerns them going forward, it is a Must Read.
********************************************
Updates on the Sea Contamination and the Leaking Radiation from the Plant Site
(1) Update per NHK as of Late 4.5 the Leak near Unit #2 has been stopped. ( Many attempts were made to Clog this "Leak", from sand, gravel, cement, to Newspaper to trash mix, to finally a Liquid Glass ( Vitrified Glass ? silicon mix ?). (More from Reuters Explains about the Leak and the risks it presented)
(2) Sadly atleast 3 Millions Gallons ( 60,000 tons) was dumped/leaked in a 48 hour period and even though TEPCO tried to reassure that this was Older,"Less Radioactive" water, there was and has been damage to the Fish and Fishing industry. Fishing Halted in Japan's Ibaraki After Radioactive Water Contaminates Sea (Japan News Daily)
(3) (Via DailyYomiuri )
Fish from Ibaraki to face tighter checks; Fisheries minister ripsTEPCO for not telling him about N-plant water release.

(4) From JapanNewsDaily
FDA Will Screen Japanese Imported Fish for Radiation . America and other countries are checking the Fish and imported goods. Especially Raw goods such as vegetables are being screened as well, by multiple countries including Taiwan,Korea and throughout Asia. Some countries have set in place a Ban as they don't trust the testing and readings from Japan, India is one such country that is banning all imported food from Japan.

(5) Sadly some of the Spin has started, this article tries to allay fears by saying Japan fortunate to have "one of most iodine-rich diets in world". This "Nature" article does go on to explore radiation vs. health risks .

(6) For years to come there will be questions as to why TEPCO dumped the radioactive waters in the sea. From DailyYomiuri TEPCO's slow response in dealing with pools of contaminated water left it with no option other than to dump it at sea. It has been portrayed on the news as merely a LEAK issue, but there are still questions about How it was Leaked, and whether the bigger question is was it also being dumped.

(3) From Nature News : We don't know enough about low-dose radiation risks on a continued daily basis in regards to ongoing longterm exposure ( including food,air,soil and water)

(4) More from the NYT regarding the Screening of Seafood, Screening the Day’s Catch for Radiation will be an ongoing issue.

(5) Japan/Tepco looking at RadiationShields ( Sept?) radiation too high to put in before then ,they would construct Sheilds to place around the Leaking Reactors on site, or acutally around the Site at the Fukushima Plant. 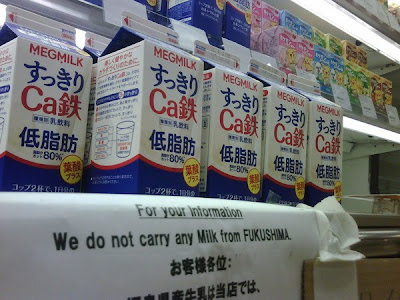 Thanks for the updates. This a complex issue with so many variables.*sighs* I hope another quake doesn't hit, like what happened in New Zealand.

Sorry I haven't been by lately. I decided to self-publish a story, did obtain an editor (as one still has to query), and have been rolling that publishing ball up the hill. Getting there!

oh good for you Kittie...so proud of you..so sorry I have not been out that much in blogland....