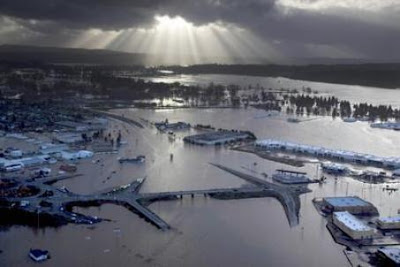 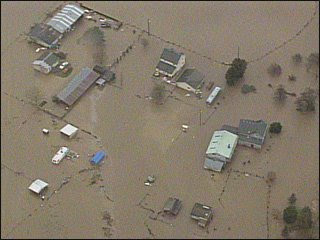 **** Orting****
~~~~~~~~~~~~~~~~~~~~~~
These Floods right now are combined with heavy snows, melting heavy snows and heavy rains.This situation may be worse than the Floods of 2007, and even the floods of 1917...maybe the worst ever. 24 Counties are effected and have been declared an emergency. The fact that huge segments of I5 are closed is very unusual, and that flooding is extensive and far reaching. Meaning large numbers of people are also trapped or without access to power or assistance. This is the latest Update as of Wednesday Night. Some video is also here on KING5 the "Urban flooding in Bellingham " shows amazing flooding.
~~~~~~~~~~~~~~~~~~~~~~~~~~~~~~
You can also click here to learn more about problems in the region. Passes are closed and a 20 mile Stretch of I5 ( which never happens). They are still due to get 10-20 more inches of rain in the next 20 hours.Parts of the State are in an Emergency and other parts have even been evacuated. High Winds have also entered the Scene. I will be posting videos of the Flooding in the Northwest. Whatcom County is one of the Counties that is facing massive flooding....The National Guard has been contacted already to assist in Spokane due to Snow, and then now also to assist in the Flooding areas in the Puget Sound and the Northwest.The Coast Guard has also been called in to assist, and in some areas Evacuations have been ordered, and they will have to assist, as most people do not have boats to evacuate. ( Govenor Gregoire went to DC yesterday, and then instead vanished on a Spontaneous Secret Trip to Iraq, yet no photos or footage has been shown, and NOW her state is in Crisis, and yet she remains missing, absent during this statewide crisis).

( I lived in the NW for many years, Seattle and North in Whatcom County, I was stunned to see my old home on the Weather Channel tonight. I trained as nurse with Red Cross there- Disaster Preparedness, and I still thought that the videos I saw tonight top ANY flooding I ever saw out there in many years....)
Whatcom County Videos ( Nooksack):::

Click the Title to MSNBC 's story on this Series of Flooding and the Weather Induced Crisis there.....and then go to KING5 , they have amazing aerials and footage from all over the state, more here that is stunning.
KOMO has 10 pages of Video and Photos sent in by the people, check it out here.
~~~~~~~~~~~~~~~~~~
Whatcom Creek ( KOMO) Dupont Street ( Post office)...( KOMO has more).

Thursday 's Updates:::
Bellingham Herald Has More Updates...
More Updates Here on KING 5.... and I will update down below in the Comments as well..
Posted by enigma4ever at 11:35 PM

Holy Moly! Quite the scene. The Pacific NW did get more snow than usual (Palin's revenge?)
& those Pineapple express pacific rainstorms are intense.
So sorry they are getting hit so badly. The report said it was supposed to let up on thursday, but our forecast calls for lots of rain.

Our rivers are up near where I live, but not near flood stage.
I hope there is Ntl Guard there to call upon for help

Well....NOAA, Coast Guard, and National Guard are all involved supposedly- I don't know how much of the Guard there is over in Iraq....that is a concern...the video on the weather channel and the videos I found online and on youtube are much worse than the last round of floods in 2007...and definently worse than anything I saw living out there for many years.....
( up in Whatcom it looked like from what I could find that the Red Cross has not been able to set up their normal shelter/safety centers...)

I did wonder about Oregon- and if you all were having to cope with flooding too...

What a mess. We have had a week of heavy rain here, but the local topography makes most of us more immune to flooding.

So wadda ya gonna do about it?

Stay safe you wild woman you! :)

That's OK, I just got lonely. ;-)
BTW, I always check for your responses even though I frequently don't reply.

And I hope no one lost their lives in that flooding. Reminds me of the time Hurricane Earl chased me through Texas; Houston and Galv flooded. I ended up in Mexico driving in 2.5 feet of water - scary and very nasty. Fortunately the door seals didn't leak, and car didn't quit. (A Peugeot.)

DrKnow:::
I cant have you lonely over there ;-(

I will put you in the next Blog Round Up....so we can ease your loneliness ;-)

So far as I know no one has died in the flooding or the Mudslides and Avalanches.....so far...BUT this is nowhere near over...luckily most people there are smart enough to not play looky-loo with it and go Water Watching...( I have lived other places where idiots would go out in their canoes to "look"...)

good think your Car held up with the Earl Chase...wow...that will give you some gray hairs !!!

Quick Update Thursday afternoon:::
Mudslides in Bellingham, still trying to get details. more than 30,000 People have been evac'd in the NW, and more to come. 400 National Guard have been set to work there, but most of their guard is in Iraq....

Portland is now flooding too, down below a rather large damn was shown on MSNBC ( if anyone knows more or has details let me know....I think I will check with some NW bloggers for more details..) KING5 and KOMO out of Seattle have the best TV reporting and video and photos...

As for the looky loos, that's a good way to get sucked down a storm drain or into a dangerous current - Darwin in Action?

Too bad you don't live closer, we could all get together and celebrate the last day of Bush!

Everyone I know is still a winger. :-(

But but Spokane is on "the dry side" of Washington! Hah! Our friends there sent an email to say the national guard is now at the schools doing snow removal because they are in a "rapid meltdown flood warning" situation, rain & flooding expected. If even Spokane is expecting to be flooded, I can only imagine how much worse the west side of Washington is.

ps, reading Dr Know & your remarks about the looky-loos reminds me of times when there were dangerous ocean waves & flood storms when we lived in southern calif ... there would still be the surfers out there risking their lives to catch the big waves!

Drknow:::
we all are still close- regardless of the miles ;-)

( that is how I look at it..gotta...we are connected...it is why we won the election and why Bushies hate us...)

More Thursday updates:::
( Most of the Crest Levels have been reached and exceed 1917 and 1932 levels..look at the Rain Levels and the Flood info below..staggering)'

Major flooding is occurring on several other rivers, including the Skokomish, Snohomish, Tolt, Cedar, Nisqually, Cowlitz, as well as Issaquah Creek.

You can find a specific river forecast from the list of links at the bottom of this story.

Here are some of the incredible rainfall totals from between 4 a.m. Tuesday to 4 a.m. Thursday:

oooops DK:::
too funny about Loooky Loos'.....when 6-6 and I were in Cali..and on the Coast- and there used to be HIGH wave Warnings- we would go watch the Surfers ( and take photos of them...) really a horrible pastime....they were fearless and stupid and we could not help ourselves....we were watching the 20 foot waves...but I think we were more watchful of the surfers....