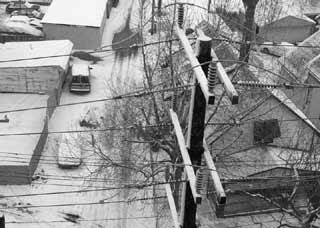 ~~~~~~~~~~~~~~~~~~~~~~~~~~~
So here we are with a Slurpy Mess here in Ctown, sometimes I think if I try to look at it in a different light and with a fresh perspective that I will have a better attitude, but time will tell....Past couple of days I tried to work and get caught up in Blogland and have a better attitude, try to feel more hopeful...So everyday I am still trying to post a little bit of news...and thoughts and also some Music and some Humor.....Is it me - or are these last few Weeks of the Bush Regime really dragging ? It's like observing and living through the Longest Root Canal in History....As Someone pointed out at Work,....in the years to come- instead of saying we were "fucked" , we can say we were "Bushed"....good point....Pretty bad when a complete stranger, an older man close to 70 wants to talk about Sending Bush and His Buddies to Gitmo......I done think the "Reckoning" has started....Down below...some on Gaza Concerns,And some other Bush Failures, Duct Tape to Abstinence, and then some thoughts on Panetta....Because it is time for all of us to remember that Bush had Help to Do What he did, including "help" from alot of DEMS, that were complicit, silent or complacent enabling him to on many of his worst Crimes Against Humanity..... 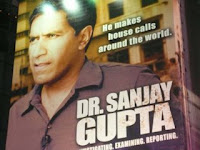 So I found out just as I was about to go to bed that Dr.Gupta is the Choice for Surgeon General. As a Nurse I have to say that I support this Choice, as this is a very talented wise Neuro Surgeon....really impressive....Sanjay Gupta is one of the few Media Medical People that I really respect, he has gone to iraq, and NOLA DURING Katrina, and covered issues from AIDS to PTSD, as well as helped work on Global Climate Crisis Issues......more here on his curiculum vitae, and his skills and talents as a physician.
~~~~~~~~~~~~~~~~~~~~~~~~~
So Everyday I have promised to find a GoodBye Song for Bush....today it is TWO Choices ( yesterday was Linda Ronstadt "You're NO Good".......Choice Number One is Robert Rouse's linked to the Title and Maria~Maria gave us Choice Number Two , Goodbye Bush.
And then DrKnow came up with Tool 's "Ticks and leeches"....
And then there is Bruce's Suggestion....Bluesy...Jazzy...."Baby Get Lost"....

~~~~~~~~~~~~~~~~~~~~~
And Wednesday Night Music about Being Hated ( another dedication to Bush) "Behind Blue Eyes" Limp Biskit...because it is a pretty profound,intense song about Loss Of Conscience.....Something Bush taught us well....there are lessons to remember as he leaves...

Email ThisBlogThis!Share to TwitterShare to FacebookShare to Pinterest
Labels: 13 Days to go....

The other day you asked how your site was loading and I noticed it IS making an awfully big download (>100+ meg?) and using A LOT of my processor (almost 50%).

1st I started with a fresh reboot (image 1); baseline.

Screen grab, crop and save image can be seen next on timeline.

Load IE and go to WS. THAT'S IT. Nothing else running.

Then, while trying to get this info to you: WS still running with a Blogger comment window, I tried to use the open WS window to go to Thumbsnap. I opened another WS (Ctrl S), which should be no problem, and CRASH. HARD.

Powered down and started over.


Saw you on C&L this morning. Keep up the great work. Hope it helps you streamline.

I meant New Window (ctrl-N) not 's'. It tried to open another WS on top of the running WS which again usually should be no real problem, except maybe at HuffPo...;)

I mostly was worried after I rearranged and put new art etc that maybe it would cause trouble for folks...I think for the most part it is okay...but keep me posted....thanks...

AB::
wow...thank you..I got mentioned in C&L round Up wow....that never happens...thanks for letting me know....( I would have figured out later when I get back from work...cuz I go there first and Huffpo...)

I decided to shut down my Cali Tejano blog. I made a post listing why.