BREAKING NEWS::: US Airways Airbus , Flight 1549, enroute to Charlotte, Went down in Hudson River at 3:30 PM, Click Link to Updates 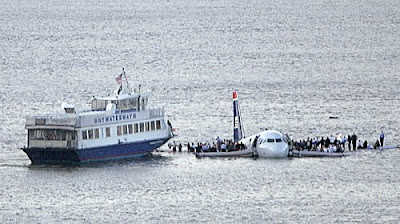 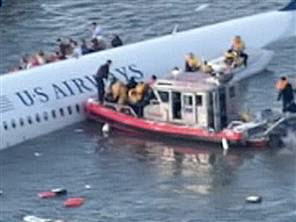 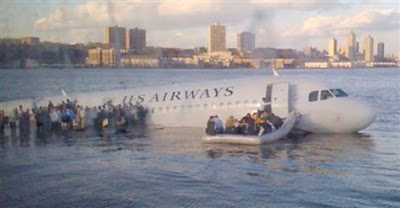 ~~~~~~~~~~~~~~~~~~~~~~~~~
3:56PM
So far MSNBC is interviewing Flight Experts, they are saying it is due to the plane running into a flock of Snow Geese, disabling both engines (?) They are showing the plane in the water, with Rescue and Ferry Boats in place attempting to rescue, 148 passengers, 5-6 crew. ( air and water are frigid cold). Unclear if Exits are underwater. Turn on your TV, Updates in the Comment Section.
MSNBC::::
NEW YORK - A US Airways plane crashed into the Hudson River on Thursday afternoon after striking a bird that disabled two engines, sending passengers fleeing for safety in the frigid waters, a government official said.

Federal Aviation Administration spokeswoman Laura Brown said the US Airways Flight 1549 had just taken off from LaGuardia Airport en route to Charlotte, N.C., when the crash occurred in the river near 48th Street in midtown Manhattan.
MORE Coverage:::
CNN Coverage here.
LA Times
Newsday has Video and More.
UK- Times Online has more...
Even More video and news from Huffington Post
~~~~~~~~~~~~~~~~~~~~~~
4:30PM
MSNBC , the FAA is reporting that ALL Passengers and Crew have been Rescued and are accounted for at this point, WNBC is reporting that it was a Controlled landing and atleast one engine caught fire. They are being taken to 4 area hospitals for treatment and care.
Phone Number for Families ::
( plane was scheduled to go to Charlotte and then on to Seattle).
800-679-8215
8PM Update:::
Seattle PI is is revealing more about the Pilots....and Who they are...
Posted by enigma4ever at 3:56 PM

Email ThisBlogThis!Share to TwitterShare to FacebookShare to Pinterest
Labels: Miracle on the Hudson, prayers to Hudson River...

4:02 Pm
Plane is still floating..wings no longer visible- they were up until a few minutes ago....still no word WHO and if people were rescued from the plane....MSNBC has been hooking into the audio of the NBC helicopter.

4:05 PM
Jim Hall of NTSB being interviewed on MSNBC.
he says it has been many years since a "Bird Strike".

Still No Numbers given...

Hall is just speaking about Bird Strikes and how "rare" they are....but that a large flock can strike engine and cause loss of people...

Pete Williams- NBC in DC confirming that it is due to birds ingested into engine. this is NOT an act of terrorism., and that Federal Officials are confirming this concern.

NOW on MSNBC they are showing footage of people being rescued.

Departure end of Runway 4 is where the Bird Collision happened,

Passengers being taken to St Vincents...
( actual incident is now being reported that it occurred at 3:03 PM)

4:30 PM
Roosevelt Hospital::
25-50 supposed to come to their Hospital- BUT none there right now.
( 4 hospitals have been placed on Standby)

4:39 PM::
NOW MSNBC is reporting that ALL passengers have been saved and removed from the plane. ( wow)....People being interviewed who witnessed it state that it was a very controlled landing on the water.

Thanks for keeping those of us at work updated. Unfortunately it's hard to keep up with these kinds of things when I have no access to television or anything.

4:48PM
plane is totally submerged, only tail fin is seen...
12 people are being treated for trauma in the Ferry Terminal.....

( Nurse Note:: trauma can include Hypohermia- and people might need warming and warming fluids)

anyone else believe in miracles...??

Photo number3 ::
was taken by a Ferry passenger, with her Iphone-she twittered it to LATIMES, and they distributed...

Just astounding, wow. I cannot believe that they managed to land it safely and that everyone is alive. Thank goodness I don't know anyone traveling today.

My family and I IMMEDIATELY formed a prayer circle upon learning of this potential life-threatening tragedy, and we are so happy to know that our prayers may have had some small part in the saving of all of those lives. In His Holy name!! God of Heaven God of Earth God of Man and God of Dearth. Almighty Father we kneel before you in humble observance and recognition that you and you alone are All Loving All Forgiving All Powerful and All Mighty -- you, Lord Father, and you alone saved the lives of your humble servants, and we serve you and worship your almight righteousness. Praise be to God the Father for he alone has the power to save lives. Amen our Holy brothers and sisters. Give glory to God in the Highest!!! Saviour Jesus helped us dodge another bullett!! Amen to the Father Amen to the Son and Amen to all who believe, for they alone shall inherit the Kingdom of God. Oh Glory!! Hallelujiah!!!

(( heroic efforts by all pilots and Boat Folks and Ferry People...and Emergency folks...)

Village Idiot;:
I know many people were praying...thank you for praying....

as a nurse...yes, I do believe in the power of people having compassion and caring for others..and yes, praying...

155 including crew, all got out safely, some were taken to NJ and some to NY, so we are still checking.
So it appears that all have survived, but we will have to update the details Pilot did masterful job, making sure that it was landed and that people all got out safely.Manifests are being checked.

It truly was a miracle that no one was killed!

A miracle? No, no invisible sky demons involved. Just damned fine flying by one helluva pilot. He did *everything* right on a maneuver that no pilot can truly practice beforehand. They ought to pin a goddamn medal on that dude and give him a year's salary reward just on general principle, because what he did is theoretically possible, but if you'd asked me before today, I'd have said that no pilot is that skilled, that perfect, that capable of doing an unpracticed maneuver with absolute perfection. If he had done even one thing wrong, there would have been dead bodies floating in the water. Instead... well.

badtux:::
amazing isn't it??? In all my life I have never seen such a thing....ever....and yeah, he did something Soooo Incredible..and he did it with care and courage..and then even after they crashed he made sure they all got off the plane...