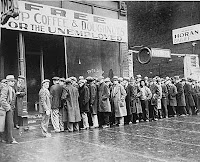 In December it is estimated that more than 11 Million Americans were out of work,(Total Jobless Number) with More than Half Million Job Loss for December Alone. 524,000 jobs were lost in December alone, so that The Number is almost 3 million is not a total shock,2.6 million is what the latest report says ( I saw another report earlier in week that stated losses at 693,000, I am worried that the number this AM did not count the December laid off auto workers- as they were supposed to be temporary?)....The number today sounds high, but I worry it does not count all the people that were already searching relentlessly for months with fruitless efforts ? And does it count ALL the Christmas Help that has now been laid off. Does it count all the people working at underpaid part time jobs ? ( No.) Does it count all the people that are working Less Hours per Corporate requests ? Does it Count ALL the Auto Workers that were Laid Off for "ONE" month in December ? I want the Truth, HONEST REAL Numbers....no more Bushified Numbers of this Titannical Regime....

Obama came right out today and addressed the issue and spoke to it. ( I will post the video when I can find it, but it is nice to see a Real Leader address Every Crisis as it hits, rather than hiding on his damn ranch...) Read more about Obama's Statement and honesty about the effects of this mess...

{{ 6-6 came to me over Christmas and said something that was striking, " So Bush can not say the "R " word, Can he say the "D" word ? Because I thought from my reading that once a Recession lasts for an extended time and is compounded with JOB LOSS it is officially a Depression ? ......I did not have an answer ...But I know I am not the only one pondering this issue..other thoughtful people have been going to Robert Reich's Blog , as he has a great post up about how the Stimulus Package should include Job Issues. He also explains economic issues with great clarity. }}

*** { Job loss number of 693,000 is the number I Posted yesterday, yet the number in the articles today is 524,000, I will try to find WHICH number is right....because it matters...just to let you know I did also see the difference...}***
~~~~~~~~~~~~~~~~~~
12 Noon Updates:::
CSPAN has the Obama Video, and I will post when I can find Embeddable Version.
HUFF PO has extensive coverage on the whole job loss spectrum.
NYT has more.
Reuters has more on Obama's Plan.
Here is More on the Reality of the Crappy Job Market...
Obama's Speech on the Economy.
Fred found this..some of the Video::

Email ThisBlogThis!Share to TwitterShare to FacebookShare to Pinterest
Labels: Click the title to read more..., The D word

according to Huffpo- there were 11.1 Umemployed americans in December -7.2 percent ....

( so the 2.9 was the total loss for the year on top of existing unemployed)

I am watching this pretty close E4E as I am one of the December "Lucky Duckies" I would trust the ADP number before I trust the government numbers since ADP does the payroll for a huge number of companies. There is also this from Brad DeLong
Brad DeLong offers some further context for the jobs numbers, observing that “And U-6–unemployed plus discouraged workers plus unable to fond a full-time job–is now at 13.5% of the labor force–and BLS ‘discouraged workers’ are a big undercount of the concept.” With so many able-bodied, working age people not actually working, we’re producing many fewer goods and services than we have the capacity to produce.

thanks for explaining about the numbers...I do think that many are settling for PT work ( I certainly know I am not the only one...I know many people that are working multiple PT jobs)..that 13.5 number is really concerning....

Everyone is expecting recession getting over soon. I have a very close friend, who graduated from Harvard. Worked for ML for over 8 years, recently he’s been “right sized” too, despite of his outstanding performance and the increasing revenue he generated. OMG, now the banking industry is badly hurt, how long it would take for those financial background guys like him get back to the job market. Banking jobs are not there as much as before as easily seen on http://www.joboutlets.com and other job sites in the region