NORTHWEST FLOODING UPDATES DOWN BELOW....( avalanches, mudslides and more) 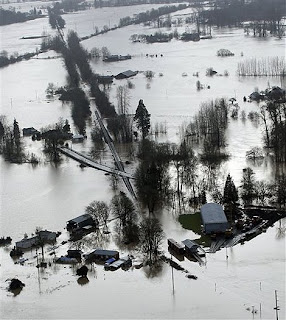 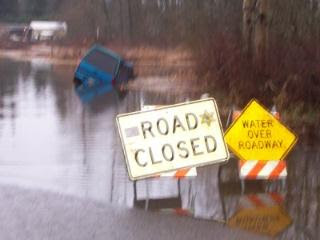 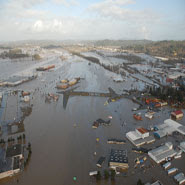 Flooding South of Seattle
I have more updates down below in the Other Flooding Post, updates linked and also updates in the Comments.( I will update between work hours. More to come.) Atleast 30,000 have been evacuated out of Flooded Areas, avalanche risks and Mudslide risks continue, even though rains have lessoned today.Another 240,000 are in Shelters throughout the State. Brad Owen, the Lt. Governor gave a Press Conference today and urged people to NOT travel ( even though most people are trapped whereever they are at this point). {{ Please note yes, Christine Gregoire is STILL MIA ??? in Iraq visiting troops ? yet NO photos have been produced and she has not issued any statements from her travels). In Comments I updated the Actual Numbers of Rainfall and which Rivers and Creeks and Waterways are above Flood Stage ( More than 30 Rivers in the NW). Title is linked to the Original Post with Videos and information.....more to come later....Stay Posted.

Areas of Concern to Watch :: Belligham, Whatcom County ( and Lake Whatcom, as they plan to Open Gates on Whatcom Creek to relieve water, yet the Creek is already flooding).....Carnation and the Snoqualmie Falls and River Region....Chehalis South of Seattle.....Also little has been reported whether there are any concerns for MtRanier with heavy rains and Snow Run Off ?
~~~~~~~~~~~~~~~~~~~~~~~
Snoqualmie Falls:::(15 seconds).

11PM Update:::
Latest from Online news shows that not much of the flooding has eased yet.
Do go to KOMO and see the Latest videos and updates and really thorough job of covering ALL the mess, from Passes to Flooding to Shelters.
KING 5 has more amazing videos and aerials, be sure to see the Thursday Night Video by Alan Shaffler, really stunning shots.
Posted by enigma4ever at 4:03 PM

Email ThisBlogThis!Share to TwitterShare to FacebookShare to Pinterest
Labels: need an Ark...

More Thursday updates:::
( Most of the Crest Levels have been reached and exceed 1917 and 1932 levels..look at the Rain Levels and the Flood info below..staggering)'

Major flooding is occurring on several other rivers, including the Skokomish, Snohomish, Tolt, Cedar, Nisqually, Cowlitz, as well as Issaquah Creek.

You can find a specific river forecast from the list of links at the bottom of this story.

Here are some of the incredible rainfall totals from between 4 a.m. Tuesday to 4 a.m. Thursday:

I've been monitoring the Fraser Valley, over the border. Snow melt and torrential rain coinciding is sure messy.
Of course the NW WA and Fraser Valley are inextricably linked when it comes to natural disasters, regardless of the border.
Regardless, it is heartbreaking to look at the devastation to such familiar scenery.

thanks dear cart....I too have been monitoring the area above the border ....and our friends in the Fraser Valley....( when I say the NW for me it always means that WHOLE area ;-)

Later tonight I will Blog the REAL concerns about Bellingham, the Bay,Lake Whatcom, and also the riverbeds, as well as explain about the HUGE honey comb of mines under Bellingham- and the special risk they pose at this time.....

Thanks Enigma, I know you have that broader view. The big concern up the valley is generally the Nooksack flooding on top of the rest.
On the positive side this might help flush the aquifer a little.

All the snow they got now has melted and then the rain...those poor people.. I used to drive up there all the time so I know the area some. My daughter used to live south of Portland, too so that's all familiar...it's terrible what they are going through.

Annette::
I think that this was bad because they got NO break in between any of it...and for some the snows had not even finished melting....but even over in Spokane they are coping with record snows and roof collapses...so no part of the State is not feeling it...and Cart brought up the problems up by Canada, and the Fraser Valley- because the Northern Part of the State also effects Lower Canada...just a big mess...and all of the Rivers and Creeks are too full- and not able to carry the water to a bigger water body to relieve all the pressure.....

This really is one of the worst Flooding Situations I have seen there ( I lived up in the NW for over 16 years....)

( when I was there I used to help set up shelters during the Floods - when I worked for the Red Cross....I don't even know where we would put them this time- if there is even Urban Flooding in Bellingham.....what a mess...)