Saturday Morning: The Whistle Stop Tour of The "O" Train and more.....Obama Countdown 2 Days to go Folks......Inauguration Schedules and More.... 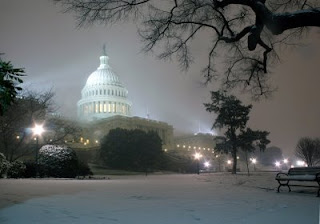 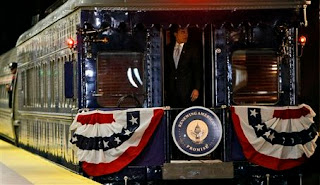 ~~~~~~~~~~~~~~~~~~~~~~~~~~~~~~~
Update 3PM::: The Whistle Stop Tour::::
((I was supposed to go clean a house today...but the lady cancelled at the last minute...Soooo I got to stay home and watch the Whistle Stop Tour, Lucky me))....Really Beautiful...Thousands of cheering people lined up on the Tracks as it traveled the NorthEast...even in the Frigid Temps ( 5 degrees without windchill)...They were waving Obama Lawn signs and also waving Happy Birthday Signs to Michelle....Obama stopped and gave a speech in Philly ( which I have posted) and now there thousands assembled in Downtown Baltimore waiting to hear Obama......He looks so happy to be able to reach out to people again... And if you want to feel the excitement of watching The Train Go by watch this video that was made by the tracks.... Change is On the Tracks Now.....The "O"Train....

And this is the 2nd Part...really good
~~~~~~~~~~~~~~~~~~~~~~~~~~~~
Click the Title and it takes you to the Inauguration Schedule of Events, even this weekend. And Please remember that there are events planned all over and on TV , not just in DC....also do watch for the WhistleStop Tour Obama has planned honoring Our History and Lincoln.....It has three stops today that you can watch....with a speech in Baltimore at 4 PM....

On the Music Front::
On another Musical Note::: FREE * FREE*FREE* *FREE**
Sunday, January 18th:::
"We Are One": The Obama Inaugural Celebration at the Lincoln Memorial, free, live broadcast on HBO -- At 2:30 p.m. EST, HBO will offer a free nationwide broadcast of the We Are One concert featuring Bono, Bruce Springsteen, John Legend and more. Check your local listings to find out where you can watch the FREE HBO broadcast. Read ALL about it here.
~~~~~~~~~~~~~~~~~~~~~~~~~~~~~
"The Rising" Bruce Springsteen...

((( For me...I will never forget seeing Obama in Cleveland with my son the first time...last winter..but then seeing him again in Downtown Cleveland with 83,000 people 2 days before the Election...and Bruce Springsteen played...and yes, he played "The Rising"...and This Land is My Land...and then watching Obama united on stage with his girls and Michelle and watching him introduce his girls to The Boss....it was special....very.)))
~~~~~~~~~~~~~~~~~~~~~
When Obama finished speaking and met the crowds...they played Ray Charles "America the Beautiful"...( CSPAN showed it)...
so I think we need to hear some Ray.... 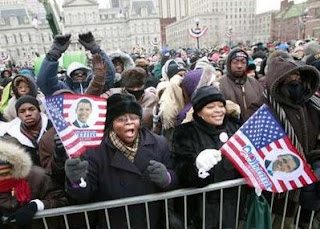 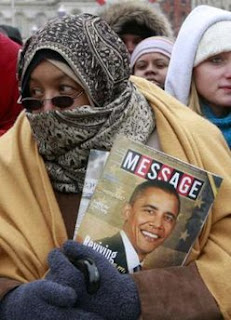 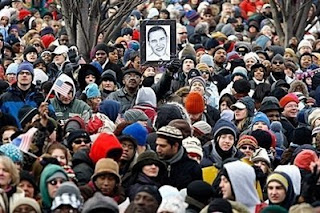 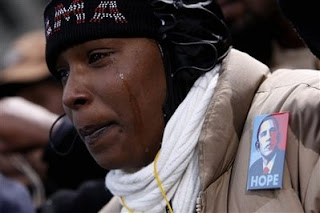 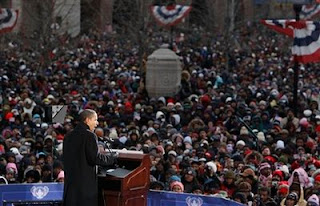 Email ThisBlogThis!Share to TwitterShare to FacebookShare to Pinterest
Labels: 2 Days to go, Hopemongering still, This is Our Moment

Don't work too hard. Have a great weekend and thank you for the link to the schedule.

Gonna miss you...take care..will see you when we can. Don't work too hard. Will be thinking of you..stay warm. I am sending warm thoughts and warmer weather your way.

and there is a man singing the National Anthem ( wow..what a voice..great Invocation too...Amen)...

now they are saying the Pledge....

( this is War Memorial Plaza.... in Downtown Baltimore..this is where I used to drive my Rickshaw when I was a poor nursing student...used to take people to hear jazz in this Square- I mention this- because this Square has Amazing Acoustics....)

Now Gov Martin O Malley and Elijah Cummings...
The crowd is Soooo pumped- supposedly with the Street crowds and the square crowds added- 100,000...

The Bidens and the Obamas come out together....the Music sours....and Obama says " Hello Baltimore" and the Crowds go wild....Pretty Noisy...hard to hear...

wow...I can not believe that THIS man is about to really become OUR President....

Obama is telling the Story of Our Nation..the Star Spangled Banner....and how Baltimore was a part of that history...the Crowds are with him...and so quiet now as he speaks...and the camera pans and you can see people crying....tears running down their faces in this cold wind...

He is Speaking IT...the Fire that won our hearts these past two years...NOW I feel like The Change is Coming....

Ray Charles " America" is playing...shit..I have to get some tissue tonight...

I am so glad you got to watch it... so inspiring, I have been in tears all day...
Just overwhelmed with emotion.
It's just so wonderful to see how the people are responding to him and to them all. Standing in the cold for hours waiting for them.. They are saying 35,000 but I think there must be more than that. It is just awesome.

Let's really send this man Light and Love.....and more to all of us...

yes...I am counting and crossing.. hoping that criminal bush doesn't do anything stupid to mess things up. If he does there will be a revolt and a war right here in this country.

be careful going to work... see you later or tomorrow. bye for now.

An amazing site and finally, someone who can finish a complete sentence and bring people together, happy and in hopes of even a small positive change would be good.

Ironic it took an African-American to pull it off.

Nice to see something other than all white audiences too ; )

oops, I didn't realize you were watching C-Span. I just sent you the vid of the Baltimore speech. Seeing those crowds put me in the best mood for inauguration! And I was pleased to see the SS taking their jobs so seriously, too. This is gonna be huge ...

I hope you're not freezing your tushies off up in cleveland..and i sure hope that this insane cold won't be an issue at inauguration! We don't want anyone suffering from hypothermia on a day like that!!
Take care with your work..I envy your time to yourself 'sans' little kids ..I haven't seen any of what you're describing..
but..be still my beating hard..I can't wait for Tuesday..woohoo..

Hey Ingrid:::
yeah, I got to watch...and that was not planned..but wonderful...CSPAN should be re-airing later maybe you could still watch...or see online later...your son might like it even? maybe....and yeah, I have been looking for beautiful photos of DC...and saving them for monthes....( I hope when I take 6-6 it looks like this...sigh...we are still undecided about going to the Inaug...)

DK::
oh good...I just finished watching the Baltimore speech and then I had to run out the door....so I did not get to post it...But I will for sure....and yeah the SS guys are so serious. I watched CSPAN and saw how they came out and then left after Obama searching and very protective...6-6 noted they are ALL his size...he likes that..( so do I....)

CM:::
hey there...isn't it wonderful to see him speak and move people and the crowds on the train tracks...so stunning...

Annette:::
yup..its a sloppy mess out there...and snowing up a storm..work was fine...home now..and it's above Zero tonight...yahoooo...I 'll be here tomorrow......and work some...I hope I can tape the HBO Obama special...

See ya all tomorrow...Let's all get on the O Train...
and count down those LAST hours....

All Aboard! This train is going to arrive right on time! Or should that be, "The O'Train has left on time!"

( cuz we all know that the Bush train went off the tracks years ago...)