The New White House Dog, Bo is set to arrive on Tuesday as a Present from Ted Kennedy.... 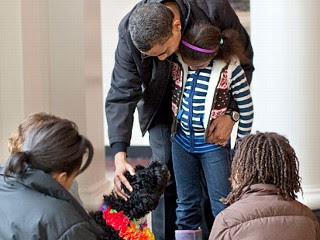 Visit msnbc.com for Breaking News, World News, and News about the Economy

More On Bo from the TV Guide:
"Bo is a six-month-old Portuguese water dog given to Malia and Sasha Obama as a gift by Sen. Edward M. Kennedy of Massachusetts. The black-furred fellow, who has white patches on his chest and chin — plus white paws — is scheduled to move in Tuesday.The Obamas had hoped to get a rescue dog, and in a way they have: Bo had been living with another family, but it wasn't a good fit, so the Kennedys gave him to the Obamas, The Washington Post reports. He was originally named Charlie, but the Obamas are renaming him."

I think it is so neat.. and what a great deal .. it is a rescue dog to a certain extent if he was with another family and now with the First Family.

and it shows that Obama keeps his promises- for 2 years his girls waited for a dog....

well, Mike...
I don't know what "linquica" so I have to look it up....they look like pretty cool dog- hypo , protective, great with kids....

Every kid should have a dog and this one looks perfect. In general Porties look like unclipped stout std poodles to me. Poodles are also hypoallergenic and supersmart, so that makes sense. Bo seems capable of breaking in previous non-dog owners to what having a dog is all about. He'll have them eating out of his paw! I love him already!