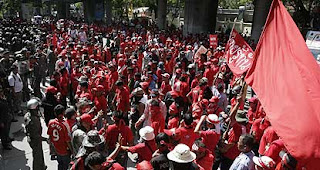 Click Title for More from LA Times:
Reporting from Bangkok, Thailand -- Protesters swept through the streets of Thailand's capital today, challenging the military for control and attacking the prime minister's motorcade with rocks and bottles shortly after a state of emergency was declared in the troubled Southeast Asia nation.Tanks and columns of army troops were brought in to defend the capital, but increasingly violent protests continued. Hundreds of sympathetic taxi drivers and hijacked public buses formed ad hoc roadblocks at bustling intersections, and the Bangkok train station was shut down, crippling transportation on the eve of Thai New Year.

Social chaos across the capital caps a week of debilitating protests by supporters of exiled former Prime Minister Thaksin Shinawatra, a billionaire telecom tycoon whose whereabouts are unknown. As many as 100,000 red-shirted protesters have swarmed into Bangkok since April 6, laying siege to Thailand's state house and, on Saturday, storming a regional summit in Pattaya and forcing nine Southeast Asian heads of state to be evacuated by helicopter from rooftops.

The collapse of the summit delivered a black eye to the 4-month-old government of Prime Minister Abhisit Vejjajiva. In retaliation, authorities arrested the invading group's ringleaders and declared a state of emergency.Speaking by video link from an unknown location, Thaskin called for supporters to topple the Thai government. He also played on police forces' alleged affinity for the so-called "red shirts" and promised his eventual return.

"The troops who have already come out can come and join the red shirts to help us to get democracy for the people," he said. "This is a golden opportunity. We will make history and there will beno more coups in Thailand. We must achieve democracy for all of us."

The state-of-emergency decree suspends certain civil liberties, including the right to public gatherings and a free press. It also cleared the way for the government to call up military troops to tackle the protest mobs. But the military has yet to act, in some cases standing down as protesters clambered over their vehicles, waving flags and chanting anti-government slogans."
~~~~~~~~~~~~~~~~
3PM Updates:::
This is a situation that bears watching,remember this that the Thai people are quiet, peaceful, mostly Buddhist,so these protests are a huge step for them , against fighting a corrupt government....Updates will be posted below.
More from BBC and even video from Expats there....
and then there is more in the past hour from Bangkok Post....
10 PM Sunday Night ( now Monday Morning there)
The Latest over on Huffpo apparently before dawn the Soldiers or some of them did shoot into the air and also did shoot tear gas canisters....will update during the night...
Posted by enigma4ever at 2:00 PM

Getting unruly over there.. isn't this where McCain was and Cindy was not to long ago??

Annette::
I don't know ?
It is a very quiet little country- except for problems with the government- corruption problems...

( I can 't see really see the McCains there? for a vacation maybe ? )

This was in Time Magazine back last fall.. Then after the election John and his boys went on a tour and he was just in the area because he was at the Hanoi Hilton the other day taking a tour and had his picture taken..


She has slipped away from the campaign trail frequently this year: in March, McCain visited Kosovo with HALO to assess progress in clearing minefields there. In June, she was in Vietnam, Thailand and Cambodia,

interesting...
hmmmm...
lots of interesting plastic surgeons there too and spas...