Todays's Update on the Death of Ian Tomlinson, the G20 Bystander that was thrown to the Ground by Security Forces...Manslaughter Charges Pending.... 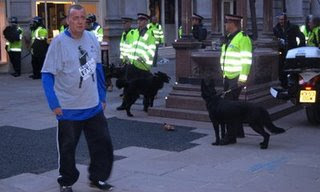 ~~~~~~~~~~~~~~~~~~~~~~~~~~~
Over a week ago I posted on the Assault of a G20 bystander, and the Footage that emerged on April 8th showing what preceded his death, this is the Update. ( Original Post is linked to the Title) It now is learned from the 2nd Post Mortem that he did indeed not die from a "heart attack" as initially reported, he died from Abdominal Hemorrhage.And the Officers that originally assaulted him face possible Manslaughter Charges. Do read the latest here from The Guardian.
The Guardian has been relentless in investigating this story and publishing all questions and problems with this death, they deserve much credit for their journalistic integrity ,do read their daily updates and full investigation.
Here is more from The Guardian's Report of the Autopsy Report:
"Dr F Patel made a number of findings of fact including descriptions of a number of injuries and of diseased organs including the heart and liver. He found a substantial amount of blood in the abdominal cavity. His provisional interpretation of his findings was that the cause of death was coronary artery disease.

A subsequent post-mortem examination was conducted by another consultant forensic pathologist, Dr N Cary, instructed by the IPCC and by solicitors acting for the family of the late Mr Tomlinson. Dr Cary's provisional findings and his interpretation of the findings have been provided to HM Coroner in a further preliminary report (the final report once again awaiting the outcome of further tests). Dr Cary's opinion is that the cause of death was abdominal hemorrhage."

*{ Medical Note from Enigma ::Please note some UK papers are reporting that he suffered a stomach hemorrhage, he did not, and that is not accurate- his abdominal cavity was filled with blood that is a very different situation and also means that he was indeed most likely in great pain, it is also unlikely it happened due to natural causes or spontaneously.}*

More from The Guardian:::
"The police officer suspended following the death of Ian Tomlinson during the G20 protests has been questioned on suspicion of manslaughter after a second postmortem examination showed the newspaper vendor did not die of a heart attack.

The findings released today show Tomlinson, who was thrown to the ground by a Met officer during the protests, died from an abdominal hemorrhage.The dramatic shift led the Independent Police Complaints Commission to confirm that the officer under investigation in connection with the alleged assault had been questioned about manslaughter.

Tomlinson's family believe today's findings make a manslaughter charge against the officer more likely. His son Paul King said: "First we were told that there had been no contact with the police, then we were told that he died of a heart attack; now we know that he was violently assaulted by a police officer and died from internal bleeding. As time goes on we hope that the full truth about how Ian died will be made known."

Tomlinson, 47, collapsed and died moments after being attacked from behind by a Metropolitan police territorial support group (TSG) officer on 1 April at about 7.20pm. The constable, whose identifying badge number was not on display, has not been identified."

This story was pushed forward and investigated by The Guardian thanks to bystanders, protesters and those that video graphed and photographed the event. It needs to be recognized without the film footage the Met would still be claiming that Ian Tomlinson was a "protester" and died of "natural circumstances " ( a heart attack). It is remarkable to note that regular citizens acting as journalists were proactive in making sure that this man received more respect in death than he received in the final moments of his life. We can only hope that there is justice for this man's family, because sadly they have the pain of seeing the original video.
~~~~~~~~~~~~~~~~~~~~~~~~~~~~~~
The Original Video that was released by The Guardian on April 8th,after it was brought to them by a bystander that filmed it:

Officer in the footage has apparently gone on sick leave due to a panic attack and now been placed on suspension. Not all officers willingly came forward immediately and identified themselves in the video. It is also to be noted that when watching it none of them moves to Help or Render Aid to Tomlinson after he has been thrown to the ground. They went as far as telling investigators and media initially that Protesters threw bottles and that prevented them from providing care of aid, the video disproves that story.
~~~~~~~~~~~~~~~~~~~~~~~~~~~~~~~~~
This SkyNews Video shows some of what happened after he was struck and wandered off dazed and confused, also has interviews with students who did render aid to him when he collapsed:::

More of the Initial Footage showing the Police Lie about the Incident, now in hindsight , more concerning.

The Tape below has interviews with young people from the scene- they raise interesting questions, stating that Ian was dead before the ambulance got there, very different than the police interview above. They described being chased by dogs and quartered off. They truly witnessed police brutality, and it is unclear why they were being treated in this manner.

Do also read the BBC article about the Police Conduct during the g20, the Terrorist Forces were employed against young peaceful protestors ? Video clearly shows Big Brute of a man smacking a small woman in the face. The bigger Questions are lurking in this story, are our friends in the UK losing their rights to assemble or protest peacefully or at all ? And why are Police trained to deal with Terror being instead unleashed unto Peaceful Protests by students and young people , are they being used to suppress Dissent with Brutality and Intimidation Tactics ?
Posted by enigma4ever at 12:21 PM

Email ThisBlogThis!Share to TwitterShare to FacebookShare to Pinterest
Labels: Assault and manslaughter charges

the more I see & read about this, the more outrageous it becomes. the police actions with the protestors was in no way "proportionate". we know from not too far in the past where this type of crack-down leads. Kent State!

it reminded me of the WTO in Seattle....too..lordy...
this was absurd....and sadly dangerous....the poor man - thank heavens it was caught on film....

Thanks for posting on this. This shows why the US desperately needs a newspaper like the Guardian.