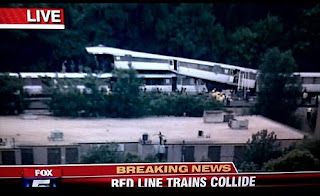 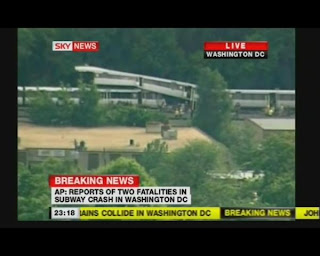 WASHINGTON, D.C. (BNO NEWS) -- Two subway trains collided in Washington D.C. during rush hour on Monday, a spokesman for Metro D.C. told BNO News. At least two people were confirmed killed while dozens of other passengers were left injured.
"At 4.59 p.m. (local time) a Red Line train derailed [..] between the Takoma Park and Fort Totten stations and was involved in the collision with another train, according to preliminary early reports," a spokesman said. People are being urged to avoid the area.
The spokesman for Metro confirmed at least two people had died. Rescue workers at the scene reported up to 70 people injured while at least 40 people were left trapped inside the wreckage, but those numbers were not immediately confirmed by officials. The spokesman for Metro said there were "many" serious injuries.Dozens of emergency vehicles are at the scene and multiple mass casualty units are responding. Local media outlets said school buses were called in to help transport casualties.
Refresh this page for updates on this breaking news story.

6:50 PM Update:::
Metro Blog has complete update and interviews.
And there is more here , that atleast 70 have been injured and atleast 3 are still trapped, read more here .
Also this site found by Ann Curry has minute by minute reporting.

There is a press Conference planned for 7 :15 PM.
7 :15 PM ( missed presser) But will post updates when I get them ( MSNBC did not air the presser). The one train ran into the back of the other, unclear if one or both were moving at what speed, or if one was stopped. ( Looking at photos it looks like one as stopped and the other ran into the back....but NTSB will figure it out. ) The engineer of the back train did die, and there are three other deaths. call DC Metro if you need to check on loved ones, trains: 202-727-9099.
Posted by enigma4ever at 5:15 PM

Email ThisBlogThis!Share to TwitterShare to FacebookShare to Pinterest
Labels: Metro Crash, prayers and light to DC

8:30 PM Update::::
Mayor Fenty is about to start a press conference. Ward 4 Council member Muriel Bowser and Metro board chairman Jim Graham are both on the scene as well.

7:10 p.m. Fenty says that there are "scores" of people who have been injured, and wow, he says there have been 4 confirmed fatalities, making this the deadliest accident in Metro history.

7:17 p.m. Catoe offers the first explanation of the crash. "At 5:02 p.m., one train was stopped waiting to get the order to pass, because the train stopped at a platform. The next train came up behind it, and for reasons we do not know, plodded into the back of that train - the operator of that train was the one who lost her life."

This explanation seems to jive with initial reports that a train derailing caused the accident.

NTSB is conducting an investigation. Metro is still searching the trains to make sure no one is left trapped on the trains.

Police Chief Cathy Lanier begs people who are trying to locate family members not to show up at the scene. Instead, call: 202-727-9099

More BNO::::
"“We are extremely saddened that there are fatalities as a result of this accident, which has touched our Metro family," Metro General Manager John Catoe said in a written statement. It is the first Metro accident involving customer fatalities since 1983 when 3 people died as the result of a derailment.

Dozens of emergency vehicles were at the scene and multiple mass casualty units responded. Officials said more than 200 firefighters were assisting at the scene, which is equal to a 3-alarm response. Firefighters from nearby cities were called in to ensure the safety in other parts of the capital. Local media outlets said school buses were helping injured being transported to hospitals.

Multiple federal agencies such as the FBI are at the scene. The National Transportation Safety Board is investigating the cause of the accident and arrived on the scene at about 8 p.m., a spokesman told BNO News from the crash site.