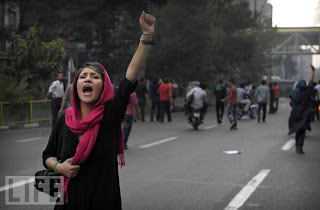 ~~~~~~~~~~~~~~~~~~~~~~~~~~
*(( My Summary below via Twitter/retrieved videos and photos/huffpost/guardian/internet resources}}**
~~~~~~~~~~~~~~~~~~~~~~~~~~~~~
Over the weekend, the situation which was already tense and volatile due to the Unanswered Election Fraud Questions
and Suspicions, erupted after the Supreme Leader gave his speech on Friday. His "prayers" unleashed a firestorm, he spoke at Tehran University where students were murdered and ambushed and also students were taken away who have not been seen since. ( Hundreds ? or unknown number to the Dept of the Interior Ministry at the beginning of last week). When Supreme Leader spoke at the prayers he did not mention the dead or missing students, his only mention was of the Spiritually Inadequate Youth. And as to the Election, he made no concessions that there were problems whatsoever, and so now Lies and Deception and Denial and Complete Invalidation of the Millions of People demanding Voting Justice were left with no other path than Revolt.

And because his "Prayers " were basically his way of raising an iron fish cloaked with words of the Holy, the Warning was issued before he brought out the full force of His Military, ParaMilitary Militia and Baseji Thugs ( In the photos you will and footage down below you will see them in plain clothes, camo with full riot gear protection or dressed in Darth Vadar Black with POLICE written on their vests. I find it odd that their vests are written in ENGLISH- POLICE ?). In the Photos you will see from the weekend, there were massive groups of people trying to reach the one planned rally of Saturday at 4PM, with a Complete Media BlackOut Ordered and with No Cellphones and No Internet, he unleashed his desperate Bloody Fury upon his own people. There the Baseji MotorBike Thugs shooting at people on the streets and there roof top shooters, and fully riot geared and armed "police" blocking off roads and alleys to the Designated Squares.There on those streets, unarmed people were beaten with batons, clubs and teargassed and shot at. There were deaths, the numbers range from 35 to over 100. The most known and seen a young woman named Neda Soltani, her story is in the post below. There were also hundreds of injuries.

Now the Iran State Run Media has called these incidents, a response to "terrorists" and "Hooligans", to "quell the violence". Yet that is not true, thousands went to the street to protest Election Fraud, and were beaten for it. In response to the beatings, yes, they did protect themselves by creating road havoc so the Baseji could not ride their motorbikes through and shoot at people. They did this by barricading with dumpsters, and yes, setting tires and dumpsters on fire. These fires also help quell the Tear gas that was supposedly sprayed at them and also dropped from helicopters. There were also the water cannons sprayed at them, but according to twitter that was not the worst of it.

And yes, they watched people get killed in front of them or wounded, and yet in all the videos you see people working together. You see in most of the leaked videos people leading people to shelter, or sheilding young girls, or helping each other up or running. And all the videos have women, girls bravely fighting alongside the men. Unarmed people fighting with fully armed Paramilitary with Rocks. You hear them chanting, banging pots and pans and bring rocks and you see them yelling and also filming . Please do see the post below with some of the photos. Over the weekend I posted all the videos that explain the story, many are too graphic to just post. Youtube is still pulling them off and on. Huffpost bravely ran most of the more violent telling videos. There is a rock scene below that very much shows people fighting to keep the Forces off their streets. At night the Forces and Baseji have been attacking people in their homes and destroying their property and cars. Basically these people, mostly edcuated middle class working people are being terrorized by their own government.

And yet they film and take photos mostly with phones at this point and somehow get the video out, mostly to Twitter. And over the weekend the CrackDown Forces did start arresting and beating those with phones and cameras. And yes, if you read below, they also have arrested more than 27 journalists that the Reporters without borders is tracking. 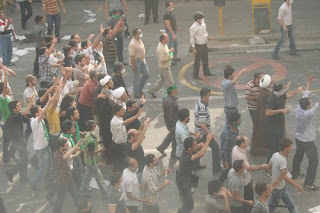 5:02 PM Update::::
In Iran there is state run TV, and it is called "Reality TV", but it is full of very odd fabrications, look at it, it is almost funny. It has only been viewed 300 times in 4 days...not a big hit I guess.
Neda's Fiance interviewed BBC UK.
Posted by enigma4ever at 6:37 AM

yup it is all going to come down to cellphone,,,,youtube and .....twitter and bloggers sifting through it and naggin the MSM...althought since things got rougher, bloodier the MSM did kind of jump in there a little bit better....

but that their lives depend on cellphones and people thousands of miles away....wow....

3PM::
from twitter- good source:::
pls be careful and keep your cameras at home -- or well-hidden ... ! [end quote]
35 minutes ago from web
A note from Tehran: police/basij pulling cars over to inspect at checkpoints... they will seize any cameras along with the owner's ID card
36 minutes ago from web
"They are stopping and searching cars and peoples bags. They are taking peoples ID cards and cameras." end quote
about 1 hour ago from web
from Tehran: "They have cordened off about 20 metres of road in Vanak Square, I was there at 7pm tonight." cont.
about 1 hour ago from web
from Tehran an hour ago: Basij crawling around haft-tir Sq.

"When is the last time diplomacy and non-violence overturned a fascist government?"

I don't know...I just thought it was an amazing question...