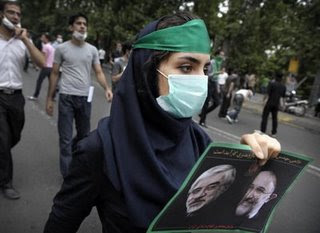 Mr. Obama also said that "something has happened in Iran," leading to "a questioning of the kinds of antagonistic postures towards the international community that have taken place in the past. That there are people who want to see greater openness and greater debate and want to see greater democracy. How that plays out over the next several days and several weeks is something for the Iranian people to decide."
~~~~~~~~~~~~~~~~~~~~~~~~~~~
Video of Protests and gatherings late Monday June 15th Night, you can clearly hear gunfire ( if anyone speaks farsi- please let me know what they are chanting).

June16th Internantional News Report Video Below ( please note that the foreign journalists only have VISA's until tonight- for election coverage- and they must leave or now face arrest, and they don't also want to endanger those around them. It is worrisome how much news we will get once they are gone. Watch the video- it is NOT just Students - people of ALL ages.

10 am Update:::
Please go to Nico's blog and read about the Journalistic Restrictions, and see latest, apparently Ahmadinejead is is at Security Summit in Russia and blasting the US and pretending that nothing is wrong in his country- that he has won against capitalism ( scary ? delusional ? what do we call this ?). The Video down below is of Doctors and Nurses who joined the protest today, they cared for the Wounded and are yelling about the Seven Killed.I will post more down below about the video.

More about the video:
At 1:41 one of nurses is shouting "7 people died in this hospital last night". other 1 died by a headshot...which said that poor brave man shoted by sniper. at 1:35 you can see on that board which writen in persian "28 wounded...8 died"
Morning of 16 June...Rasoul Akram Hospital's doctors and nurses are protesting about what happened in the last night gunshots by Goverment's militia (basij) and police. 36 people shots By Gun 8 dies and 28 injured .

Here is a Letter written and posted by Nico Pitney over on Huffpost it is from a Med Student and explains WHY the Nurses and Doctors protested this morning....as a RN I am so so moved by that video and this letter...heartbreaking...:::
Hello,

It's painful to watch what's happening.

I don't want anything to do with what has been said this far, as I neither have the strength nor the resilience to face all these unfathomable events.

I only want to speak about what I have witnessed. I am a medical student. There was chaos last night at the trauma section in one of our main hospitals. Although by decree, all riot-related injuries were supposed to be sent to military hospitals, all other hospitals were filled to the rim. Last night, nine people died at our hospital and another 28 had gunshot wounds. All hospital employees were crying till dawn. They (government) removed the dead bodies on back of trucks, before we were even able to get their names or other information. What can you even say to the people who don't even respect the dead. No one was allowed to speak to the wounded or get any information from them. This morning the faculty and the students protested by gathering at the lobby of the hospital where they were confronted by plain cloths anti-riot militia, who in turn closed off the hospital and imprisoned the staff. The extent of injuries are so grave, that despite being one of the most staffed emergency rooms, they've asked everyone to stay and help--I'm sure it will even be worst tonight.

What can anyone say in face of all these atrocities? What can you say to the family of the 13 year old boy who died from gunshots and whose dead body then disappeared?

This issue is not about cheating(election) anymore. This is not about stealing votes anymore. The issue is about a vast injustice inflected on the people. They've put a baton in the hand of every 13-14 year old to smash the faces of "the bunches who are less than dirt" (government is calling the people who are uprising dried-up torn and weeds)
~~~~~~~~~~~~~~~~~~~~~~~~~~~~~~~~~~~
Video of the Pare Military and the Police Brutally attacking people June 15th, and remember the video above- the nurses and doctors took care of those that were being attacked and shot at. 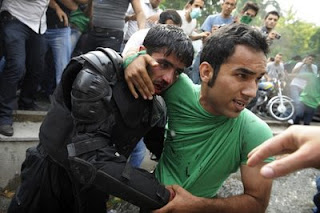 Email ThisBlogThis!Share to TwitterShare to FacebookShare to Pinterest
Labels: Dictator Sneaks off to Russia During Night ? The Whole World is Watching.....

Two things immediately came to mind, Get The Fuck Out Of Dodge and stay one step ahead of the hangman.
It's pretty clear the vote was rigged.

Busted...
really you think the Dictator is looking for a new home ??? really ?

Once again, enigma, you are the one providing thorough coverage of the news I want to know. Thank you sincerely for the service you provide your readers completely free of charge. You are amazing...an unsung hero of the internet.

oh gosh border....
they need us...they are fighting a Fascist dictator....and soon there will be no media coverage unless we air their videos etc.....for the first time I am very very grateful for twitter (and yes, I finally hit the twitter to find info...)

this is the way it happens. this is what Iran was perched to do just before Bush stuck his nose into their backyard. this is how democracy happens. it doesn't get imposed from the outside. it comes from within. it may not be pretty but this is the way it should've happened in iraq. the people have to rise up and be willing to fight. they may not win this time but with the world seeing how much the people want it and witnessing how hard the crack down becomes, I think they have a good chance.

I just read somewhere Mousavi is under house arrest and Rafsanjani resigned. Sounds like a coup is under way (if it wasn't already).

ahhhh DK...you always have a way of putting things....yeah Bush is such an idiot he offended them but then went ahead and stuck his nose in their business...no wonder Obama is treading so lightly- gingerly....trying to not disrupt their situation...or in any way imflame it....

830 PM:::
( really amazing news)
McClatchy newspapers:::
"No one in their right mind can believe" the official results from Friday's contest, Grand Ayatollah Hossein Ali Montazeri said of the landslide victory claimed by Ahmadinejad. Montazeri accused the regime of handling Mousavi's charges of fraud and the massive protests of his backers "in the worst way possible."

"A government not respecting people's vote has no religious or political legitimacy," he declared in comments on his official Web site. "I ask the police and army personals (personnel) not to 'sell their religion,' and beware that receiving orders will not excuse them before God."