Iranian Uprising Update Day 12 : The Government 's Bloody Brutal Crackdown is in full force upon the People. And the People are resisting. 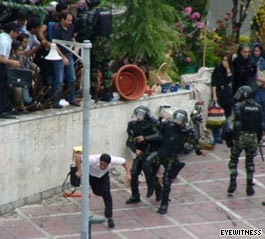 Sadly as the Crackdown toughens there it has been harder and harder to get more information. Cellphone and Internet is sporadic and people have to keep moving about to get messages out, most of the video that is coming is cellphone video and Twitter ( text) messages are telling the Increased Lockdown they are experiencing. During the day, more areas are seeing troops on the ground in different areas of Tehran and neighborhoods. And a Military Basijji HQ has been set up at the Sports Stadium. The people there are resisting and are beyond brave in many of the videos I link to....They are seen yelling when the Bassji swarm or attack people on the street, they chant and yell at their motorcycle units that swarm through the city. And yesterday there was footage of more Enforcement Presence, the military ? or police on the streets.( posted yesterday).
~~~~~~~~~~~~~~~~~~~~~~~~~~
Do scroll down and see President Obama's Statement on Iran from yesterday's Press Conference.
~~~~~~~~~~~~~~~~~~~~~~~~~~~~~~

WARNING MORE DISTURBING VIDEOS FROM TODAYThis Video was just post only 300 views, twittered put up in Youtube today 6.24.09, Military Presence HUGE, and More Violence, and It must be from yesterday with cellphone.

Very Close Up Footage of Violent Street Fight,very very Intense video, turn sound down...
and take a very deep breath if you are going to watch this one, it shows a very very intense street fight,
so intense and bloody that I can not embed here, But it is worth looking at even the first 10 seconds as it shows
middle age educated working class people fighting back. Then there is a very bloody scene of someone
very wounded trying to be moved- it is heartbeaking....and WHY I posted the First AID Site above...The man does die in the video, and it is much more graphic than even Neda's video, and yet I will never know his name. He too died with his eyes wide open.
Here is the Video I apologize but it must be seen knowing
a week ago these people were protesting a week ago .....\
~~~~~~~~~~~~~~~~~~~~~~~~
Reports from Within via Twitter updated in Comments
Dear Readers, I do apologize for the typos and errors....I am only one person...
Namaste...prayers to Iran.....maybe we all need to go to the roof....
Posted by enigma4ever at 2:00 PM

Email ThisBlogThis!Share to TwitterShare to FacebookShare to Pinterest
Labels: whole world is watching...many prayers to the people in Iran

more from another With In::::

rony_s RT There is a Basij station in Iran-Zamin ave. where most biker units are organized. #iranelection #gr88 #neda plz RT
less than 10 seconds ago from web

abas818 Basijs are ruthless, have no mercy. Everyone is beaten to death. Tehran is bleeding #Iran #IranElection #Tehran #Mousavi #neda #GR88 #Basij
less than 10 seconds ago from web

twistedpuppet Rt from Iran: All shops and Passages are closed at Baharestan SQ, Gunshot being heard from Jomhori St #iranelection #tehran #iranians #neda
less than 10 seconds ago from web

SLSiriRT Mohammad Mehdi Zaboli, Hamshahri-Javan photographer who was arrested in hospital is now in Evin. #iranelection
half a minute ago from web

iranbaanAfter repeated visits by Zaboli's family to Evin & Revolutionary court they've been told he's in Evin. #iranelection
less than a minute ago from web

iranbaanMohammad Mehdi Zaboli, Hamshahri-Javan photographer who was arrested in hospital is now in Evin. #iranelection
1 minute ago from web

jimsciuttoABCProtester on Mousavi's absence: 'things have chgd a lot in last few days, we're doing this on our own' #iranelection
less than 20 seconds ago from web

jimsciuttoABCProtester: 'dr's fighting off basij so they can treat the wounded' #iranelection
1 minute ago from web