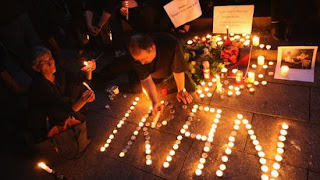 ~~~~~~~~~~~~~~~~~~~~~~~~~
DO BE SURE TO READ THE 1-3 PM UPDATES ABOUT THE RALLIES TODAY AT THE MOSQUE AND SEE THE FOOTAGE OF KARROUBI AT THE PROTEST....amazing videos
~~~~~~~~~~~~~~~~~~~~~~~~~~~
4am::
8 British Embassy Staffers have been "Detained" or "Arrested".
BBC states that they have been arrested"for their part in the post election "riots."
~~~~~~~~~~~~~~~~~~~~~~~~
More from CNN Blograises more questions than answers.
Snippet:::
TEHRAN, Iran (CNN) — Eight local staff members of the British embassy in Tehran have been arrested in connection with the country’s post-election unrest, Iran’s government-funded Press TV reported Sunday.Asked about the arrests of the local staffers, an official at the embassy would only say, “They couldn't’t come to the office today.” The person asked not to be identified because he is not authorized to speak publicly on the matter.The embassy’s official response was that it had seen the reports and were following up on them, a spokesman said.Meanwhile, the Foreign Office in London said it had recently “received a number of, sometimes confused, reports that British nationals or others with British connections have been detained. We continue to raise them with the Iranian authorities.”
A Foreign Office spokesman further added: “People with connection to the U.K. have been arrested all week.”
~~~~~~~~~~~~~~~~~~~~~~~~~~
* ( I did check the TIMES -UK, and Guardian and The Independent to try to verify this information, but it was not online yet.
~~~~~~~~~~~~~~~~~~~~~~~~~~~
Campaign Center of Un-Named Presidential candidate seized ? read below
From Tonight at 3 AM
Voice of America::: More about it here
"A report published Saturday by the pro-government Fars news agency says police in Tehran seized a building that was operating as a campaign center for an unnamed presidential candidate. According to the report, police claim the building was being used as a "command center for psychological warfare against Iran's national security."
~~~~~~~~~~~~~~~~~~~~~
Opposition PLOT described in The Guardian Is very concerning, and worrisome. If Comrades have been "interrogated".
~~~~~~~~~~
Snippet from The Guardian::
Jailed Iranian reformists have been tortured in an attempt to force them into TV "confessions" of a foreign-led plot against the Islamic regime, it was alleged today, as the country's guardian council buried hopes for any significant revision of the disputed presidential election.According to Iranian opposition websites, the "confessions" are aimed at implicating Mir Hossein Mousavi and Mehdi Karroubi, the defeated reformist candidates, in an alleged conspiracy.Mostafa Tajzadeh, Abdollah Ramezanzadeh and Mohsen Aminzadeh, all Mousavi supporters, are reported to have undergone "intensive interrogation" sessions in Tehran's Evin prison since Mahmoud Ahmadinejad's disputed re-election.

They are among several hundred activists, academics, journalists and students detained in a crackdown coinciding with the brutal suppression of street protests.Prisoners reportedly heard screams from Tajzadeh and Ramezanzadeh in Evin's section 209, which is reserved for political prisoners and is run by the hard line intelligence ministry. Aminzadeh, a former deputy foreign minister, was heard shouting: "I am not going to give interviews."

The guardian Council has declared there were no major violations in the vote, which it described as the "healthiest" since the 1979 Islamic Revolution. It had already rejected a call by Mousavi, for the election to be annulled because of suspected vote rigging.a senior cleric, Ayatollah Ahmad Khatami, told worshippers at Tehran University: "I want the judiciary to ... punish leading rioters firmly and without showing any mercy to teach everyone a lesson." Ominously, he used the term "mohareb" – "one who wages war against God" – a crime punishable by death.

From Nico 's Blog:
2:14 PM ET -- More video reportedly from today. This incredible video shows Mehdi Karroubi, the other reformist candidate to run in the presidential election who has now allied himself with Mosuavi, marching along with the crowd.
~~~~~~~~~~~~~~~~~~~~~~~~~~
2PM on CNN they ran this update:::

Enigma Comment:: This photo is Evin Prison where hundreds are being Held without charges, many arrested on the streets, many from their homes and now it has been confirmed that some have been removed from the hospitals. Many are students, activists, educators, and Journalists, and Wounded people. The Numbers range from 475 to Hundreds ( One EU Human Rights org estimated over 2000). Many are regular hardworking people that did nothing other than question WHAT happened to their Vote ? They are Now Imprisoned.

Email ThisBlogThis!Share to TwitterShare to FacebookShare to Pinterest
Labels: early am update....Please DO see Music Videos Down below

British Foreign Office confirms that local staffers of embassy in Tehran arrested http://tinyurl.com/nknkez #iranelection
about 3 hours ago from TwitterFox

Oops, meant Iran: Here's BBC now, the 3rd outlet in the past 24 hrs talking about how rallies are smaller http://bit.ly/qOEIP #iranelection
about 4 hours ago from TwitterFox

Here's BBC now, the 3rd outlet in the past 24 hrs talking about demonstrations are smaller in Iraq http://bit.ly/qOEIP #iranelection
about 4 hours ago from TwitterFox

To my friends in #Pakistan: Have you see the ad offering a 50-million rupee reward for Mehsud? Know where I can see a jpg or pdf of it?
about 5 hours ago from TwitterFox

Re: Iran arrests 8 local British Embassy staff. When asked, embassy said “They couldn’t come to the office today.” #iranelection
about 6 hours ago from TwitterFox

@iranonstrike Yes we talked about the rally earlier and the questions surrounding it http://bit.ly/139YLA
about 6 hours ago from TwitterFox

Here's the story of 8 local British Embassy staffers arrested: http://bit.ly/13hAZ8 (we'll update link as we get new info) #iranelection
about 6 hours ago from TwitterFox

Msg on Moussavi's FB page: "Legal" gathering Sun. Caveat: No way to verify authenticity. Also why would govt suddenly OK it? #iranelection
about 8 hours ago from TwitterFox

( above is Saeeds page)

The gathering is officially meant to honor Mohammad Beheshti, a hero of the 1979 Islamic Revolution who was killed in a bombing on this date in 1981.

The demonstration comes after two weeks of protests against the official results of the June 12 presidential elections, which President Mahmoud Ahmadinejad won.

Supporters of opposition leader Mir Hossein Moussavi protest in the Turkish city of Ankara June 27.The gathering is officially meant to honor Mohammad Beheshti, a hero of the 1979 Islamic Revolution who was killed in a bombing on this date in 1981.

The demonstration comes after two weeks of protests against the official results of the June 12 presidential elections, which President Mahmoud Ahmadinejad won.

A post on a Web site associated with opposition leader Mir Hossein Moussavi urged people to go to the rally.

"There will be a gathering in 'Ghoba' Mosque and it's legal! Please send this message to everyone you can in Iran," says the post in Farsi and English, on a page which claims to be Moussavi's Facebook site.

CNN has not confirmed the site is run by Moussavi or his associates.

Iran's Supreme Leader, Ayatollah Ali Khamenei, Sunday called for an end to street demonstrations. "I advise both sides not to provoke the emotions of the youth, not to stage people against one another," he said in a speech on government-funded Press TV.

"This integrated nation must not be split and a group must not be incited against one another."

Although it is allowing the demonstration -- intended for "the pious" -- Iran intensified its crackdown over the weekend, reportedly seizing wounded protesters from their hospital beds and arresting local British embassy staff in Tehran.

Eight local staff members at the embassy were detained for their role in the unrest, Iran's government-funded Press TV reported Sunday. The Foreign Office in London confirmed there had been arrests but would not say how many.

Amnesty International said Saturday that government-backed paramilitary forces are preventing doctors from getting names from wounded demonstrators or asking how they were hurt.

"The Basijis are waiting for them," said Banafsheh Akhlaghi, western regional director of the human rights group, referring to the government's paramilitary arm.

The clampdown comes as the deadline looms to file complaints against the results of the disputed election, which has prompted weeks of demonstrations.

Ahmadinejad won the disputed election by a margin of two to one over his nearest rival, according to official results. Defeated candidates Mir Hossein Moussavi and Mehdi Karrubi said the results were rigged, and their supporters have taken to the streets.

At least 17 protesters have been killed, according to official statistics, and the actual number may be higher.

Press TV said eight staffers had been seized for their role in the unrest following the disputed presidential elections on June 12. The Foreign Office did not confirm the number of people held.

Iran then recalled its ambassador to Britain, saying it would reconsider its diplomatic ties with the United Kingdom.

Withdrawing an ambassador is a very serious gesture in diplomatic circles.

The Iranian government has long accused other countries, especially Britain, of “meddling” in its affairs, but has offered no proof any outside forces have been involved in the unrest since the election.

On Wednesday, Iranian authorities said they had arrested several foreign nationals, some with British passports, for allegedly helping foment the disturbances.

Thousands demonstrate silently in Tehran
Posted: 11:02 AM ET
TEHRAN, Iran (CNN) — About 5,000 protesters marched slowly and silently through Tehran Sunday, near a mosque where the government was allowing a demonstration for the first time in days, a CNN producer said.

11:15 AM
Andy Sullivan tweeter..( his post has photo of Evin prison at the top page...very very sad.)::
Sunday is the anniversary of 7th. tir martyrs, there will be a gathering in "Ghoba" Mosque and its legal !
Not much news from Mousavi & Karoobi. People are perplex Once again chants of Allah-o-Akbar were heard all over Tehran and Iran.
persiankiwi is arrested.

There is no news from Ahmad Zeydabadi, journalist who was arrested last days

URGENT: Karoubi: I will only announce my representative if an independent team is formed.

URGENT: MirHossein Moussavi will NOT have any representatives in GC Speciall committee.
The name of the girl who was shot in Baharestan & died later in hospital is reportedly Sheler Khezri.
A Female Student Who Was Shoted, Named SHALIR 19yrs. Confirmed Dead.
Reports: More than 7,000 Protesters Siting on the Street Near Neda Was Shot Dead. Police Sourended Them (not conf.)