Families Marched together to the Mourning Rallies....Silently wearing black...(updated noon 6.18.09) 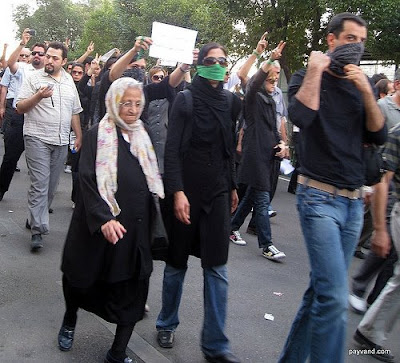 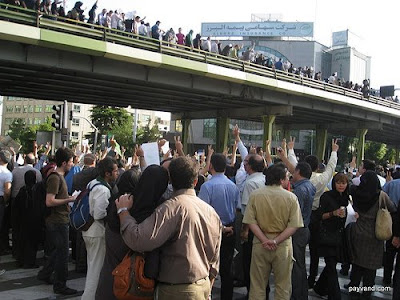 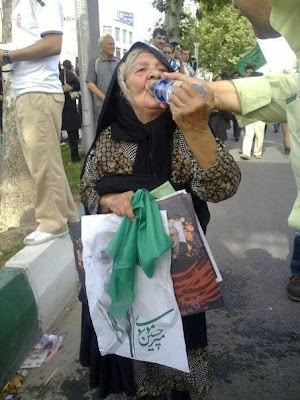 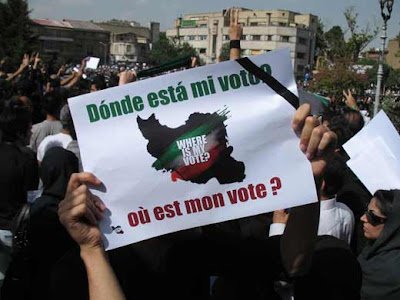 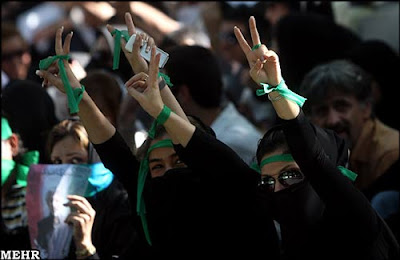 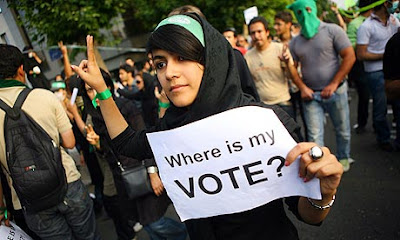 
I am still gathering and posting information as I find it, from internet sources, utube and twitter, the Media Blackout continues,....Links to Liveblogs of Huffington Post and The Guardian are still linked below. Sadly there are some videos below showing what did happen at the University. More in yesterdays post as well. I am trying to post about the People, and show their videos and photos, that is what they want the world to see....
~~~~~~~~~~~~~~~~~~~~~~~~~~~~~~~~~~~~~~~~ 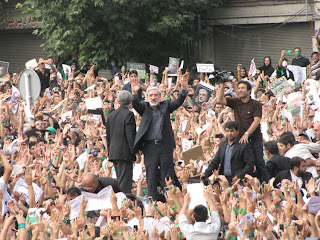 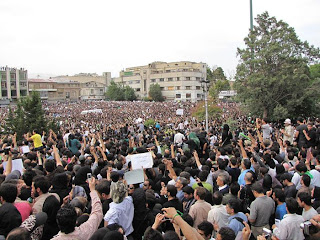 ~~~~~~~~~~~~~~~~~~~~~~~~~~~~~~~~~~~~~~~~~
Mousavi speaking at the marches today.....it is said that one million were there, here are more photos from that rally..... Today was a day of mourning, and people were encouraged to dress and black and pray first and that the protests were to be silent and honoring the dead that have died this week.Below there are some videos showing some of the violence unleashed by the Baseji upon the University students. He had also requested that those being held be released.It is now nighttime there....I have updated links below covering the events.Nico Pitney of Huffington Post and the Guardian are both still liveblogging and have frequent updates.
~~~~~~~~~~~~~~~~~~~~~~~~~~~~~~~~~~~~
Video from the Rally today 5PM 6.18.09 ( just posted to twitter)

The Mousavi video, Nico Pitney posted today over at Huffington Post, it is in farsi, but beautiful and powerful....the photos alone speak volumes...( he is working on getting it translated)....it is haunting... 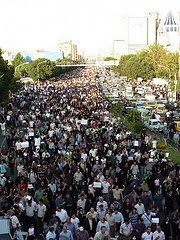 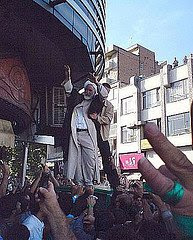 Riot police and Basij hardliner militia attacked the University of Tehran student dormitory last night. Up to 150 students were jailed, at least 1 (and up to 15) students were killed and many more injured. The attack followed student protests against the June 13th coup d'etat in which the government stole the votes of people and announced fake res
~~~~~~~~~~~~~~~~~~~~~~~~~~~~~~~~~~
More video of the Damage

~~~~~~~~~~~~~~~~~~~~~~~~~~~~~
Amazing photos from the rally today, That show all ages, at the rallies, not just students , yet the Government there keeps trying to portray it is "hooligans" and in
Ahmadinejead's last comments he called them " dirt on the wind".
~~~~~~~~~~~~~~~~~~~~~~~~~
Opinion Post in the NYT, Must Read, and how more about the Election Rigging......
~~~~~~~~~~~~~~~~~~~~~~~~~~
More from Robert Fisk reporting for UK's Independent
Snippet:::
"Indeed, the arrest of the Islamic Republic's first foreign minister, Ibrahim Yazdi – he was taken, quite literally, from the bed of his Tehran hospital where he is suffering from prostate cancer – shows just how high the level of suspicion is amid the heights of the Islamic Republic. No one has managed to suggest a sane reason why a man who worked alongside the founder of the Islamic regime, Ayatollah Khomeini himself, should suddenly disappear before our eyes. Yazdi had urged Iranians to boycott the presidential poll four years ago – the election that brought Ahmadinejad to power – but was urging all Iranians to vote last week.

If anyone needed proof of the government's state of indecision, they had only to look at yesterday's Tehran newspapers. Suddenly, the mass demonstrations were acknowledged in full. A whole front page of photographs showed Wednesday afternoon's Mousavi rally. Ahmadinejad had said at the weekend that his opponents were mere "layers of dust" – an unwise as well as a childish remark – but across one photograph, demonstrators can be seen carrying a banner which reads: "The layers of dust are making history."

Other papers showed Iran's top six football stars playing South Korea in Seoul with Mousavi's campaign green ribbons tried to their wrists. They complied with instructions to take them off for the second half of the match – which was broadcast live across Iran and which turned out to be a draw. Even Mousavi's website is no longer blocked. We may ask what all this means. But so does all of Iran."
~~~~~~~~~~~~~~~~~~~~~~~~~~
Really interesting video from June17th, note the police standing quietly with the people...there is no tension...this is from the Mourning rallies....

With two friends dying, I'm having a hard time following the events happening in Iran. Oh I do watch the news, and I am aware of it all, but for me the whole world shrinks to encompass only the lives of these women.

dearest utah....
I am so so sorry about your friends...and what you are going through...

I cover this...because there are people there like us...who want and hunger for change and to know that their vote matters...for me it is that simple...they are risking their lives to take video and photos right now...so I post what they send out...that is all...I can do...and for me...I try to support positive change and the battles that includes....from anywhere....

and sometimes we have battles of our own at home...take care of yourself..many many hugs...

Great job. My humble piece pales in comparison. So I'm linking to yours.