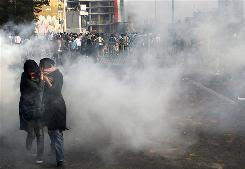 Women are a huge part of this story, In my lifetime I have never seen women on the street fighting side by side with their husbands and sons and brothers. They are a part of this struggle in a way that none of us would have foreseen a week ago. The images of them gathering rocks or protecting a wounded person or listening to their Voices on the videos is Historic.We always hear about the Fierce Lion Spirit within Iranians, but I think what we are really witnessing is the rise of the Lioness Spirit....it is courageous and Fearless. In this video of protests from yesterday you can clearly hear a woman's voice leading the Chant through the smoke of the tear gas.
~~~~~~~~~~~~~~~~~~~~~~~~~~~
USA Today explores the history changing role women are taking in this Uprising. Their courage has been breathtaking. And this article also explores the shift that their role has added to this Uprising. I many of the late night Smuggled Videos I watch , they are the ones filming with cellphones, and of the twitters I read I can tell which ones are women as they sit in the dark texting out the events of the day. For now it is illegal for them to carry those mobiles and to be seen filming, they are risking beatings and imprisonment or worse for carrying a phone.....but it does not stop them from reporting the Truth or from going to the streets.
~~~~~~~~~~~~~~~~~~~~~~~~~~ 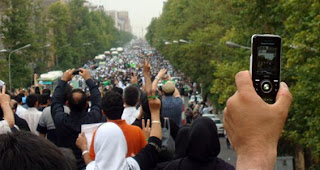 As this Iranian Government continues it's Media Black Out it is interesting to see how effective their brutal crackdown will be in suppressing the truth. Considering most information has now come down to cellphones and Twitter and some hidden computers and creative access to twitter. This article has more from some very different reporters and journalists and how they see it. In a way the fact that they have been so severely Silenced shows more about how important Freedom of Speech truly is, and now how dangerous it is in Iran. A week ago would anyone have perdicted a Country's Future was so connected to people being able to use cellphones and Twitter ? And that lives would depend on their ablility to do so ? Native Americans used smoke signals, the Iranians are being as creative at getting their messages out and staying connected. This Huffington Post article takes another critical look at the role of Citizen Journalism in Iran at this time.
~~~~~~~~~~~~~~~~~~~~~~~~~~~
More from the BBC about the situation there in the past 23 hours shows how difficult things have become in a matter of days. BBC map shows the protests.....and the city of Tehran. geographically tracking the situation and putting it in context. BBC (UK) and Persia despite many constraints are providing amazing coverage. Here is an Interview done by the BBC with the Doctor that tried to save Neda's life...really stunning.
~~~~~~~~~~~~~~~~~~~~~~~~~~~
Cellphone Video from Looking Down on Basharastan Sq yesterday 6.24.09, the bloodiest day yet. This linked video clearly shows how the Situation has degenerated into a situation where any single street can easily within minutes become a battlezone situation. The Video shows that the protests now have a flash mob feel, and then the Basjii desend like locusts swarming and attacking at random. The Video is grainey, blurry, but still the horror these people are experiencing as they are terrorized by their own Government is disturbing.
~~~~~~~~~~~~~~~~~~~~~~~~~~~~~
One of the main twitters last night was people trying to get information to the Iranians on how to protect themselves when attacked by the Basji, it was chilling realizing that so many were trying to reach out to them and offer them help with this simple link an anti riot website. And so this being my first week to Twitter, I have spent the past few nights twittering Riot Protection Advice, tears gas care, and how to put pressure on a gunshot wound,...Again the enormity of people worldwide sitting up late into the night trying to send them this help is surreal. But after watching the video above, how could I as a nurse not try to reach out and help. But what moves me is that so many others around the world are doing the same thing....
~~~~~~~~~~~~~~~~~~~~~~~~~~~
Worldwide Vigils and Rallies of support are being planned this week look for one in your area.
This beautiful video below is a Candlelight Vigil that was held in Vancouver, it is called " The Scream of Silence".Really Stunning.

~~~~~~~~~~~~~~~~~~~~~
Really amazing photos capturing the situation.....please do share. In an odd way it has been amazing to watch as more and more reporters have been expelled over this week, and others arrested, that the Coverage has come down to photos capturing a moment in time that truly tells the story. And even more Orwellian now that People sending the photos out or even having a Camera or even a phone are being arrested and beaten. It makes the photos a precious connection to a people in danger.
~~~~~~~~~~~~~~~~~~~~~~~~~~~~~
And just when we thought the Iranian Government could not paint the situation more in a more irrational deluded light, They now are trying to tell the Neda story as that she was killed by Outside Terrorists, and they claim they have a Foreign Bullet. Which is ironic, since the family was not returned the body properly for burial and they have now been forced to flee their home.
~~~~~~~~~~~~~~~~~~~~~~~~~
Two women tell their tale of escaping from Iran, they are clear about what they went through.
~~~~~~~~~~~~~~~~~~~~~~~~~
When I heard their tale above I realized that many are now trying to get out of Tehran and Iran. I hope that some of the Twitter people that we are missing are escaping.Persian Kiwi is one of those people..... People following Persian Kiwi please do go to this blog and look for updates.....
~~~~~~~~~~~~~~~~~~~~~~~~~~~~
For those that don't understand the Brutal Basiji are and how they operate in Iran, and the risk they pose, and the power they wield, against citizens and against the Media and Journalists...This Mini Doc by CURRENT explains alot. CURRENT, this is Al Gore's online channel , also has more on Iran that is worth seeing.
~~~~~~~~~~~~~~~~~~~~~~~~
Cleveland article presents some interesting information about the situation, and shows how Iranians here at home are watching this situation unfold.
~~~~~~~~~~~~~~~~~~~~~
Aljeezera coverage Asks some really interesting questions and raises new angles to the story.
~~~~~~~~~~~~~~~~~~~~~~
Aljeezera also has an amazing update today and footage that must be seen that proves that Protesters in the street on June 20th were being shot at from above it is Chilling and gripping and well reported.
~~~~~~~~~~~~~~~~~~~~~~~~~
One of the most disturbing revelations that came out over the past 24 hours is that Mousavi met with 70 University professors in the past 2 days, now it appears from different accounts they are being held, Some reports like this CBS one say they are being "detained". Where as Tehran Broadcast is openly reporting that they have been arrested and are being held by the government.
~~~~~~~~~~~~~~~~~~~~~~~~~~~~~~~
1 PM That is all for now...more updates later today. Please do read Huffington Post LIVEblog by Nico.Pitney he is really covering all angles of this situation....
8 PM ...checking Twitter and updating post for tomorrow..sadly we all know that with the Sandford Foolishness, and the Deaths of Micheal Jackson...the media will slow down their coverage of Iran...so so sad....and frustating...have a good rest of the night...Another update tomorrow..

Please do read the post below it explains why I have disabled comments for now.
Posted by enigma4ever at 8:00 PM

For reasons best not explained, I've come to know a former member of the Revolutionary Guards really well. He's done some pretty dreadful things in his life, from attacking women in the streets for not wearing the full Islamic gear to fighting alongside Islamic revolutionaries in countries abroad.

And yet now, in the tumult that has gripped Iran since its elections last week, he's had a change of heart. He's become a backer of Mir Hossein Mousavi, the reformist candidate who alleges fraud in the elections. He's saved up the money to send his son to a private school abroad, and he loathes President Ahmadinejad. He's not the only one.

I had to leave Iran last Sunday, when the authorities refused to renew my visa. But before I left, another former senior Revolutionary Guard came to our hotel to see us. "Remember me," he pleaded. "Remember that I helped the BBC." I realised that even a person so intimately linked to the Islamic Revolution thinks that something will soon change in Iran.

Despite his attempts to stop the bleeding she died in less than a minute, he said. [...]

Dr Hejazi said he had not slept for three nights following the incident, but he wanted to speak out so that her death was not in vain.

He doubted that he would be able to return to Iran after talking openly about Ms Soltan's killing.Two really amazing updates from Huffpo- which is loading really SLOW...so I put them here for you::::