Iranian Uprising Day Nine., Despite Government Brutality the Courage of the People Persists..... 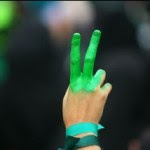 They are still on the streets, using cars to barricade, and setting up road blocks so the Baseji can not run their motorbikes through, during the night on the Twitter they were discussing ways to make the Roads more difficult for the motorbikes, there was even advice how to "disrupt" a bike ( they were planning to visit the bikes when the Baseji eat or sleep ).There were also giving tips how to place glass or oil on the road ways so the Baseji bikes would wipe out. These are resilient brave people.

In this video you can hear what sounds like Pots and Pans, I did read ( also on the twitter) that they will start doing that as well, that Silence is Over. Another thread said that they will start chanting to the Police" Join Us". And yet during the night a Baseji HQ was apparently set on fire, it is hard to see in this but clearly they are not going to be put down by the Baseji Thugs.

Huffington Post still has the best Live Blog and NYT has set up their running own Liveblog today, the link is below. I will be posting new TWEET information and links when I have it. On another note do see Google News, they have set up a whole page for News Sources and BLOGS on Iran ( amazing). And they also are offering Farsi translation too, they deserve major thanks for that. But I wrote a scathing post earlier today about the MSM coverage, and in light of some research I should maybe not be so angry, some of them are clearly working with limitations and problems. On another note google news this am had 27,000 article and links for Iran Election, that says to me that the Whole World is indeed watching.

* ( I am also in the process of setting up a Whole Another Blog, called The Uprising to archive all of these posts and also because this will need coverage for awhile. If anyone would like to forward photos, links etc I will post, just email me. This post will be updated throughout the Day. Remember Iranians are risking their Lives to get these videos and photos out to the world for their Truth to be Known.
~~~~~~~~~~~~~~~~~~~~~~~~~~~~~~~~~ 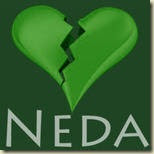 By now many people have seen the Footage of the young woman shot dead in the Street. Her name was Neda, and according to WPI press office, her surname is Soltani, she was an employee of Rademan Airways. She was standing on the corner with her father watching the protests. Her father was next to her when she was shot,and in the 40 sec.video you can hear her father's voice talking to her, and a Farsi reader at Huffington Post translated it " Neda do not be afraid" and "Neda stay with me". This is the an account of a bystander that tried to help, who is a a Doctor, and this post has more details about her death. Warning; it also sadly does contain graphic photos. The video is still posted below, and will remain posted even though it is heartbreaking to know that she died such a way. Even sadder now that it is Fathers Day. Her Name in Farsi means " The Voice or Call ". Over at Huffpo this afternoon they are posting this video which clearly shows her at the corner moments before standing with her father...she is alive and young.... TIME Magazine is now covering her story as well. 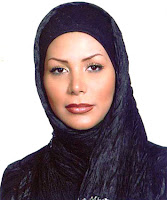 For Neda and her Dad that was with her, This Song, is called "Oh, what a day to be alive" , the video montage is haunting and yes, shows what they all are facing right now....

Email ThisBlogThis!Share to TwitterShare to FacebookShare to Pinterest
Labels: whole world is watching...click title to watch the video

tom said...
This comment has been removed by a blog administrator.
4:02 PM

I have no idea how this ends or what happens next...but as always...

I have hope...because they have such great courage....

D.K. Raed said...
This comment has been removed by a blog administrator.
5:46 PM

Hey DK.,,
it is better now that she is known, has a name and is now grieved....I was worried that she would just be another death on the street..( I actually found film footage of 5 yesterday, and did not know- farsi label means you don't not know until you are watching..)

she will be honored and remembered...and yes, cherished...

no I am still blogging here- and everything will stay here...

but I wanted to have a whole blog set aside for it- I think we will need it ....

and I will still try to have just one streaming post per day on this...

it's too important not to blog it and blog it well- esp if it helps them fight a tyrannical regime....and maybe have a new government that is listening to the people...

Happy-
Please do watch some of the videos and read what I have brought from the People there- even read the article " Iran: the Biggest Prison" in the world,..they are suffering right now...under an Irrational Dictatorship...

Blood in the streets...
read every I posted before posting a preachy email that someone sent you..

NO ONE is cheering..NO ONE is feeling cheerful...most People I know are very very worried about this situation....they are thinking about what is going on...dead people in the streets....homes being invaded..young people being dissappeared...

If you are uncomfortable reading this or SEEING what is really going on there...

But please...after spending many many hours watching BRUTAL Bloody videos and forwarding them on to the right Places...I don't have patience for the preaching and smug American comments...your friend send you that- fine...it was for you...

But most people that are watching and reading these posts recognize that I am trying to make very sure that the Iranian's Pain and agony is being shared- their truth...THIS Blog and These posts are NOT about Politics or what is best for America...

This is about a Human Rights Crisis....Period.

Iranian clerics defy ayatollah, join protests
A photo showing Iranian clerics participating in an anti-government protest speaks volumes about the new face of Iran's opposition movement. Mullahs rule supreme, and are loyal only to God and Iran's Supreme Leader Ayatollah Ali Khamenei. To march against the will of Khamenei, who called the election results final and declared demonstrations illegal, is no small act. full story
•In defiance, clerics march
•'When they want to hit me, I say hit'
•Candidate withdraws voting complaint
•Obama: Iranian charges 'patently false'

These are revolutionary times. All over the globe men are revolting against old systems of exploitation and oppression and out of the wombs of a frail world new systems of justice and equality are being born. The shirtless and barefoot people of the land are rising up as never before. "The people who sat in darkness have seen a great light." We in the West must support these revolutions. It is a sad fact that, because of comfort, complacency, a morbid fear of communism, and our proneness to adjust to injustice, the Western nations that initiated so much of the revolutionary spirit of the modern world have now become the arch anti-revolutionaries. This has driven many to feel that only Marxism has the revolutionary spirit. Therefore, communism is a judgement against our failure to make democracy real and follow through on the revolutions we initiated. Our only hope today lies in our ability to recapture the revolutionary spirit and go out into a sometimes hostile world declaring eternal hostility to poverty, racism, and militarism. With this powerful commitment we shall boldly challenge the status quo and unjust mores and thereby speed the day when "every valley shall be exalted, and every moutain and hill shall be made low, and the crooked shall be made straight and the rough places plain."