Prayers and Light to the The Uprising, the Revolution for Hope and Change in Iran..... 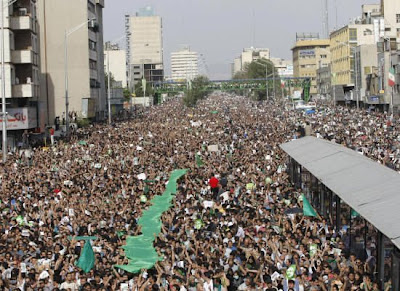 ( first posted 6.15.09 am...and yes, out of support for the Uprising Watergate Summer has gone Green....for Hope... for Change)
~~~~~~~~~~~~~~~~~~~
I have been watching What is Happening in Iran...My heart is heavy for them, we here in the States do indeed understand about Illegal Manipulated Elections and Fraud...there is NO Way that there was Any Kind of Landslide in Iran....the Whole World is watching the Shenigans....I pray the Media keeps reporting, and Blogs, Huffpost is doing an amazing job....( by the way MSNBC has been a bit sluggish on reporting it..) I look at this photo and I kept thinking of the Beijing Protests back in 1989 and Tank Man. I do hope the Countries of the world, especially those that do Business and commerce with Iran will also step up and speak out about the Election Fraud that is being perpetrated. And yes, I know President Obama is in a Precarious position....but yes, the less pragmatic part of me wishes he would speak out....but I doubt he will, it is still too tenuous a situation, he is wise to hold his voice and counsel for now. And yet a part of me thinks his speech in Egypt did inspire many, especially women in Iran to get out and vote and fight back....and yet other Leaders, Merkel and Brown and the EU have been speaking out about their concerns about Election Integrity.Protests of support are being shown around the world from London to Europe.
~~~~~~~~~~~~~~~~~~~~~~~
SKy News Video from June 15th:::


And an interesting thought....Look at the Photos at Huffpost...There are not Police or Military to be seen yet, yet some of the Flicker photos today are showing ParaMilitary on their motorbikes and yes they are intimidating and there is some violence associated with their presence but not as many one would expect...So one has to ask, does the Dictator have support of the Military or the Police ? If not...then things could get very very interesting...And the other concern is that the Paramilitary state para-military force known as Basiji has infiltrated in the rallies. ( I am posting photos below that need to be seen, before they are removed from Flickr). Please also note that the protesters have English signs- they want the Press to read their messages.
~~~~~~~~~~~~~~~~~~~~~~~~~~~~
More Updates and Pertinent Information::::
Media Group Reporters without Borders is demanding International action.....
And then of course there is Always Twitter Threads this is one thread
Here is another Thread that is being updated regularly....it is a Friend Feed, that has photos and video and messages.....
There are some amazing photo threads on flickr, this is just one such thread that has some very graphic worrisome photos..... 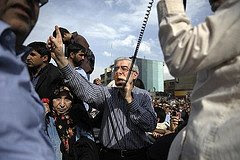 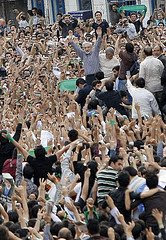 Email ThisBlogThis!Share to TwitterShare to FacebookShare to Pinterest
Labels: Change has begun...., The Whole World is Watching, Voter Fraud

this is a test message...have not been able to post messages...

The extent of the fraud in the Iranian election was demonstrated on the evening of the election when the Iranian electoral commission declared the exact result approximately 5 minutes after polling booths had closed. Hundreds of thousands, perhaps has many as a million Iranians have protested the fraud since that time, in what some are suggesting is the biggest uprising in Iran since the 1979 revolution

I remember all too well the Iranian revolution, the bloodshed, the hostages, the firing squads...we have already seen some shooting from the so called militas, but the crowds, they are immense, these are educated western thinking folk defending their votes, and we used to be a revolutionary people, when OUR election was stolen very few of us did anything, so Kudos to the folks in the streets and we wish them well....

thanks tom...
I remember too...
I wish them well..and pray for their safety and admire their courage...
and yes, we need to support them...share their twitters,video and footage, and encourage (yell) at their media for better coverage....Countdown is starting and looks like Keith is covering ( bless him...)
and yes, 2000 and 2004 we should have hit the streets you are right....

These are educated people who want their VOTE ....oye ...sounds pretty familiar doesn't it ???

blood has already started flowing there...we must support them....

Hey, Y'all, I knew you'd be all over this. Thanks for this post of the Greening of Iran!

We "Greened" the Ladder background, in solidarity. http://noladder.blogspot.com/
I guess maybe we'll keep it that color for the duration of this revolution.
I hope The People of Iran win Their Election!

I have a few more links too, though you got the linkerama goin'on yeah!
Wow.

Ahhhh the NOLA folks...
good to see you...
I will head over and yup add you to my links...we need to give these folks our support and coverage....I loved that Keith Opened Countdown with it....after reading all the numbers and looking at the data and seeing that Mousavi WON hands down...this was not even close...we need to keep it up and sadly- I think the next few days will determine WHAT happens next for these brave souls...thanks for coming by....

Okay.....the NOLA folks have the right idea...let's go green as a way to support the Iranian Uprising...

Iranian secular law states that if no candidate gets more than 50% of the vote there must be a run off.

Walking man,...
I agree America should not be the issue....I mostly wanted to hear Obama speak as a Leader and say that he was watching...and that the violence concerned him....that was the right thing to say....and yesterday other leaders spoke up as well...Merkel and Brown...

Enigma ... thanks for all this ... all i, as an iranian can ask my american friends is to make sure no one uses ANY OF THIS as a pretext to launch war with Iran, EVEN IF Ahmadinejad gets elected ... you know that there is an important assembly that is reviewing the vote process ... this is in their power ...

I als want to express my position: Ahmadinejad DOES have supporters, and no not all of them are rural ... for instance Ahmadinejad has been very good to Iranian expat scientists ... it is not like 70 million people in Iran hate him, and not all those who support him are fascists ... bu tthe problem with all this is that he has become the poster boy for a group of fascists who are beating up students ... no one knows who is commanding them, really ...

Anyways, IRanisns need to sort this out ... as long as US and EU govenments keep a distance, this will find its own way in history

Dear Naj....
thank you for being here....and speaking out...you are right the Iranians need to sort out their future....it is in their hands....I don't want to see our country or our leaders interfere in any way....I do support Leaders voicing concern about the violence, again but not to interfere....

I do understand that Ahdinejead ( sp) does indeed have supporters...what I truly support is Fair Elections where Votes count..all of them ( and people have a right to always question if they do not feel their Vote was counted...no one should ever wonder where their vote is and was it counted...as someone that was purged here in 2000, and 2004,.....there is nothing worse ....so I understand why the Iranians are peacefully protesting....)

In today's post up above I linked to what you said because you said it beautifully....I can not imagine what it would be to see this going on in my country....it is a tense time....

I support Change ( and not just in Iran) ....but ...and it is a BIG BUT....but only if the people there want Change and are feeling hopeful....and optimistic and that 80% came out to vote....The Change must always come from Within...and not be effected or driven from the outside....

But you also know me...I will blog it ..and I am especially worried about the people having a Voice and Freedom of the press, and that their Human Rights are at stake....

I do admire the Courage and Bravery that the Iranians are showing....so my prayers go to them..and your country....( as I said...Tank Man Courage is a rare beautiful thing....)