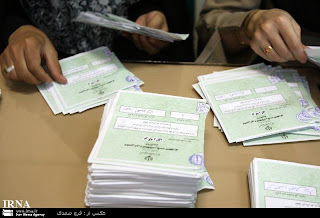 ~~~~~~~~~~~~~~~~~~~~~~~~~~~~
Many are wondering what happens now in Iran, after 18 days of The People's struggle to demand a Legal Election and that their Votes be counted. At first there was outcry against the results, millions took to the Streets. Then there was the demand for a Recount. Then there was a demand for an Annulment. But yesterday the Guardian Council handed down their decision, that the Election had been "fair", and that 10% of the Votes had been re-examined.And the State TV continues to say that the Vote was fair, and that Ahmadinejead won even more votes. Please do look at the photo from the State TV story, please note that the Ballots are not even FOLDED. ( pointed out by an Iranian).It was a rigged Election, and now has been falsely legitimized.

Read here how Ahmadinejead says that the Enemy Plots have failed in Reuters...
~~~~~~~~~~~~~~~~~~~~~~~~~~~~
The Guardian is still trying to put a Face on the Detained or Dead. Please do read this post. Please remember many of these that are Detained, are Imprisoned, for no reason, other than they were on the street.And others were protested the Legitimacy of their Election . Others were journalists that were covering the Election.Others were wounded that were taken from the Hospitals. People are trying to investigate if there is any way to send in International Red Cross and check on the safety of the prisoners at Evin Prison.Evin Prison is by some accounts "full", and supposedly people are being kept at other Facilities now, the veracity of that issue needs to checked, but it remains concerning. At this point remember people were also arrested for having cellphones and cameras....and the Exact Number of how many detained is Questionable ? Estimates are that 2000 have been imprisoned in recent weeks.

~~~~~~~~~~~~~~~~~~~~~~
This video was found via Twitter last night ,( it was filmed in the past 5 days? it is disturbing, but there is no actual blood in this video, but it needs to be seen, and has been forwarded, it clearly shows what a Street Clash looks like.) it is footage shot bravely by a woman , appears to be filmed with a camera, as she wears dark robes fully cloaked, she holds the camera up to film part of this, it appears it is a street scene, there is a crush by paramilitary units, but from somewhere ? above ? gunfire admits, there is also Basiji , in a matter of seconds, there is crushing chaos. Even though the paramilitary units with various uniforms have full armour and Shields they too are swept up dodging bullets,they also do not appear to understand the language. Note the casings on the ground and hitting the sidewalk.It is unclear if this was a protest, or just people going about their daily life.The video ends in a hurry, with gunfire still echoing....It is unknown what happened to the camera woman....

Email ThisBlogThis!Share to TwitterShare to FacebookShare to Pinterest
Labels: What happens now ?