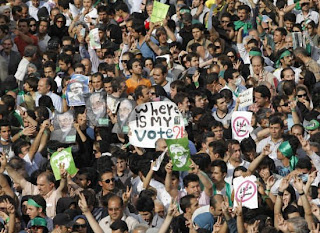 The extent of the fraud in the Iranian election was demonstrated on the evening of the election when the Iranian electoral commission declared the exact result approximately 5 minutes after polling booths had closed. Hundreds of thousands, perhaps has many as a million Iranians have protested the fraud since that time, in what some are suggesting is the biggest uprising in Iran since the 1979 revolution."
~~~~~~~~~~~~~~~~~~
There is more today 6.15.09 from Juan Cole examining the Election and the results and it points out some interesting discrepancies...
Posted by enigma4ever at 2:32 PM