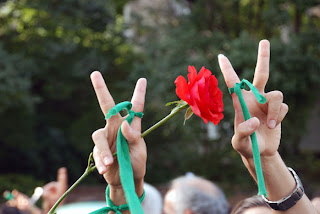 For days now I have been forwarding messages, links, and photos, videos to The Guardian and Huffington Post ( and yes, much has been from twitter the past 2 days)....as I know many others have as well. I encourage people to keep doing this, as the Media Blackout continues, Online Sources will need to continue to need people digging at twitter ( that as of last night was still getting over 100,000 hits an hour).I will continue to update this post throughout the day, email me if you have updates. To those that have been sending updates I say thank you. To the "Sites Within" that I was using to get information and have now been shut down , I send my prayers for your safety.
Posted by enigma4ever at 3:00 PM

Email ThisBlogThis!Share to TwitterShare to FacebookShare to Pinterest
Labels: The Whole World is Watching....

Off topic: The CDC posted this weeks #'s

3594 new cases in 1 weeks time & 43 additional deaths. These are confirmed stats for the US only.

As for Iran- these people protest at great risk, but then again they saw what happened to the US letting a madman steal an election.

It is encouraging to see all walks of life... many generations uniting for the shared cause.

I hope they are able to turn it around.
We desperately need some stability in the middle east.

Well now they have been warned by the corrupt theocracy which was NEVER elected.
First they were told their votes counted
then their votes were not counted
they they were compated to soccer hooligans,
Now, well it seems that all hell is about to break out in Iran
I wonder if the Army will take on the militia and the revolutionary guards???
I wish them luck
Yes they can (perhaps...)

There is one other angle that no one has dared whisper about...the armies, the military....the police....what if they do not support the Supreme Leader...what if....

We all always look at that Tank Man photo...and we think How brave he was....

What if the soldiers are brave tomorrow and think of their families and loved ones on the street....????
what if....

They are strong brave people....
tomorrow is their day of Destiny....