Day Eight of the Iranian Uprising, Protestors clubbed, beaten and shot at from buildings and on the ground , sprayed witb tear gas, and more. 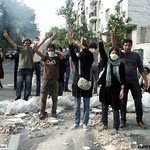 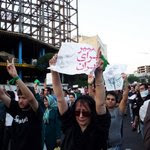 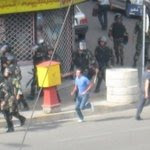 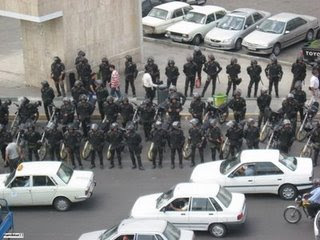 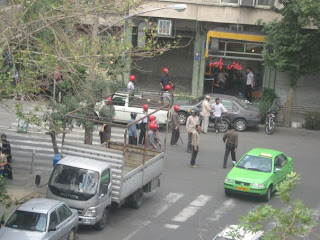 ~~~~~~~~~~~~~~~~~~~~~~~~~~~~~~~~~~~~~~~~
I had to say something, we need the MSM to get on board and cover it like ANY crisis where people are being shot in the street and in their homes. WHY are they taking orders from a Dictator and the Supreme Leader, they are journalists they should report what is happening. Instead they have Ex Beauty Queens making irrelevant comments about the Videos that have been sent to them, and they did not even watch the videos. The one video that was sent to them that shows street acitivity and is 5 minutes long, if they actually watched the WHOLE video, they would realize that 2 minutes into it a man is shot, and there is much gunfire and then the people try to move him to safety. It is stunning, shocking and disturbing. The Street is where people were shot and pummeled attempting to get to the Rally today. Police showed up well armed and attacked citizens and shot at them, and fired tear gas and water cannons on them.

By Evening time, around 8 PM people were advising others on Twitter to seek care of injuries at Embassies ( Dutch, Aussie,Brit, and Slovenia, Most were taking people in, Canada is not.). The reason they were doing this is because the Police were showing up and taking people from the hospitals. Twitter reported that the Khomeni Hospital is right by one of the main street that has shooting on it and ongoing gunfire.

There was a video of a young girl that was also shot on the street, and yes, she dies in the video. It is clear she was on the street. There are videos of BBC Persia that clearly show shooters on roofs and also from windows. CNN could air these, they were sent to them, they chose not to. There are also videos that clearly show college students cornered and backed up to a fence and then rushed and beaten by the police. Another video shows girls being whipped and beaten and called Derogatory names.

CNN and MSNBC and MSM should be ashamed....Citizen Bloggers have covered this Crisis for days with Journalistic Integrity and did their best to make sure that the Iranian's videos and photos that they risked their lives sending were shared with the World.

I will be posting all the video and photos I found today in a post below later this evening in a couple of hours. I spent most of the day sending Huffington Post Nico Pitney twitter finds, and he has done an amazing job, a true journalist. We are grateful that The Guardian and Huffington Post stuck with the story when the Bloody Violence hit.
~~~~~~~~~~~~~~~~~~~~~~~~~~
ALL of the videos, photos and information was obtained by internet resources and by trolling hours and hours of Twitter ( which is why the Iranians are putting their data and messages on twitter- to get it out to the World ).
Posted by enigma4ever at 4:35 PM

Email ThisBlogThis!Share to TwitterShare to FacebookShare to Pinterest
Labels: the whole world is watching...

the sea is crimson

the fog is thickening
silencing the seagulls

the steering wheel has gone mad

all are on the deck
'cept those waiting for the pirates

i start mopping the deck
again...

This is from an Iranian Poet of my acquaintance

tom said...
This comment has been removed by a blog administrator.
6:11 PM

Annette said...
This comment has been removed by a blog administrator.
6:25 PM

D.K. Raed said...
This comment has been removed by a blog administrator.
6:29 PM

enigma4ever said...
This comment has been removed by the author.
3:18 AM