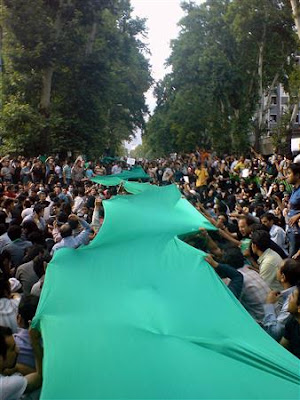 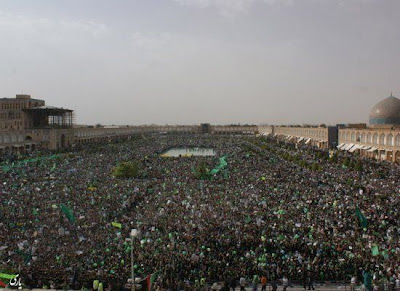 These top two photos are from yesterday, thousands at Naghagshe Esfehan, the amazing part is that People in Iran have not seen these photos.(Today I am posting latest photos and videos first and then ALL latest newest updates will be linked below.)
video below is of people marching to the Rally yesterday,it was miles of people. 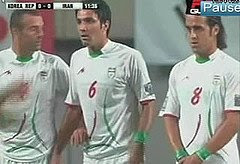 Today at the World Cup the Iranian Soccer Team wore Green Wrist Bands of support, ( They are playing South Korea).
There are more amazing photos of the people at the game supporting the movement, go to Huffington Post and Nico Pitney is still liveblogging and doing an amazing job.
~~~~~~~~~~~~~~~~~~~~~~~~~~~~~~~~~~~~~ 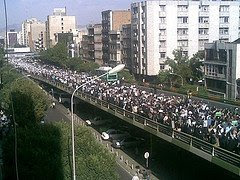 Protesters today on Krimkhan Bridge June 17. Thousands have quietly filled the streets, some dressed in Black and some carrying photos and flowers honoring those that have been killed by the paramilitary and police. The Video below is from the Bridge.

From Reuters and The Guardian:::
3.30pm:
More than 500,000 Iranians are silently marching from from Haft-e-Tir Square to Vali Asr Square, reports Saeed Kamali Dehghan in Tehran.Many are wearing black in mourning for those killed in earlier protests. Protesters want to go to Tehran University later to mourn the killing on Sunday of students in a dormitory.Reuters says that "tens of thousands" of people are protesting. One street leading to the square was packed for several kilometres, witnesses said.Most of the protesters were silent and making victory signs. Some are holding pictures of those killed.The authorities say the rally is banned
~~~~~~~~~~~~~~~~~~~~~~~~~~~~~~~~ 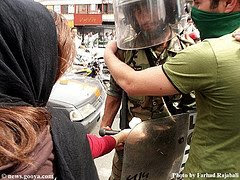 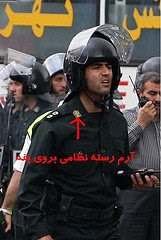 The Insignia on his collar shows that he is in the Military, the Army, that means that the Ahmadinejead is using the Military to suppress the people. 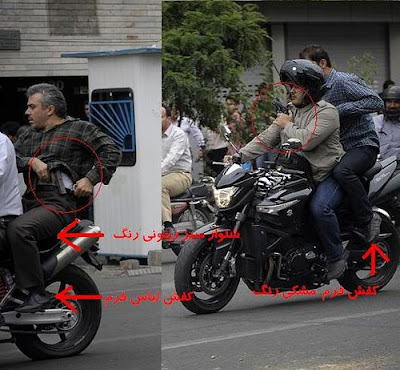 This photo shows that the Government is using Plain Clothes Police on motorbikes, although there are questions that by looking at the dress that these people are Military. Note the Drawn weapons. There is no need for armed police in plain clothes the marches and rallies have been peaceful.( Both photos are from Monday )
~~~~~~~~~~~~~~~~~~~~~~~~~~~~~~~~~~~~~~
A woman wounded in the Protests on Monday...It is important to realize that whole families did go to rallies, and yes, they did bring their children too....this is no longer about just the young people and the students, millions are engaged in this. 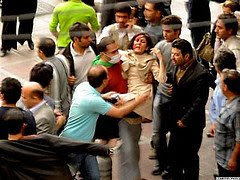 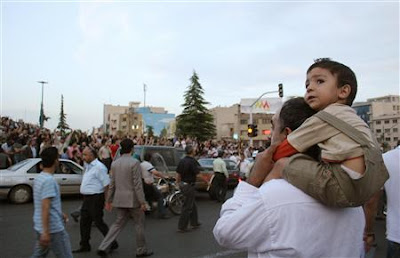 Email ThisBlogThis!Share to TwitterShare to FacebookShare to Pinterest
Labels: The Whole World is Watching.....

Wow, look what a people do when they are deinied a true accounting of their votes, especially when they believed their government that they actually had a choice in the vote!
Stunning.....
Hopefully this will be the second Iranian Revolution...
It seems the revolution will not be televised, it will be twittered

tweet....tweet...Finally a true USE for twitter...amazing...what people who are driven and caring can do , eh ? VOTES matter...period..always...

Wonderful sources, Enigma! Thanks for keeping us informed.

I didn't know about Asgari's "suspicious death" until you posted it. I think he was the one who said 30 towns counted more than 100% of the votes? hmmmm ... doesn't take a university student to figure out that is some funny math.