Tonight In Iran, Before Tomorrow the Day of Destiny, again they Take to The Roof Tops to cry to God..... 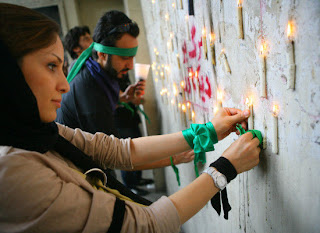 I went over to Nico Pitney's Liveblogging at Huffpost, and there was an amazing video was posted, I have reposted it below with the transcript. ( I don't think Nico would mind me sharing it, I have sent him much video these past few days). There is a transcript, of what the woman is saying as she listens out the window, as her neighbors again cry to God....For many nights now as phones and Internet has been removed and communication repressed, the Iranians have gone to their roof's and called to God. I am printing the transcript that someone painfully transcribed for him.( below the video). I am also posting video of them calling to God earlier in the week, there is a shift in the cries now,there is more pain, more desperation. I want to go up on my roof and cry with them at this point.....I don't know what we can do to help them....I know there are mothers like me, crying for their sons, wanting something more for their futures...as a mother I know that...and I look at the young faces in the photos and the photos of the old women in the photos I posted yesterday and I think they have waited so long...they have hoped and prayed...and they too marched for Mousavi ...for Change....They too have hungered for something else.
~~~~~~~~~~~~~~~~~~~~~~~~~~~~
Checking Twitter and Pitney's post and The Guardian, and they are all reporting that Mousavi's people, his inner circle, have all been arrested, and his office ransacked by plain clothes policemen.....It is 3am there now...What tomorrow brings for them...I do not know...But I pray they have the strength to meet what comes....I light my candles and send many prayers on the wind for them.....

And then I watch this video again....The Opposition video, and it reminds me of us, last year campaigning for Obama, wanting Something more for our children, something better, Change, Change that would bring a world that is more together, that people connect more....I watch this video and think they are no different than us.... 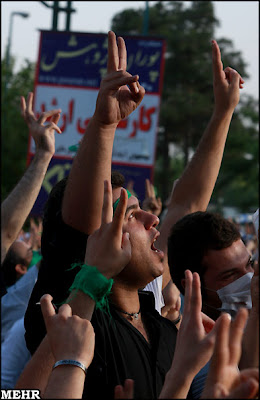 Email ThisBlogThis!Share to TwitterShare to FacebookShare to Pinterest
Labels: Allahu Akbar, The Whole World is Watching.....The Sea of Green is tomorrow

Again An Explanation what Allahi Akbar means..really means...( From my post earlier in the week)::::

~~~~~~~~~~~~~~~~~~~
Nico Pitney posted this video and an explanation on Huffpost, explaining that the video was explained by an email what the chant Allahu Akbar means,....really means....

"I cannot in any way claim to know what people are thinking or meaning on the ground, but for centuries, 'Allahu Akbar' has been in the Muslim world a battlefield of meaning and ultimately of political legitimacy. They are five syllables pregnant in meaning, mutability and richness, not simply a ritualistic or fundamentalist dogmatic trope. Nor is 'Allahu Akbar' simply a prayer. In fact, despite all its negative, violent connotations in the West, 'Allahu Akbar' has been uttered by Muslims throughout history as a cry against oppression, against kings and monarchs, against tyrannical and despotic rule, reminding people that in the end, the disposer of affairs and ultimate holder of legitimacy is not any man, not any king or queen, not even any supreme leader, but ultimately a divine force out and above directing, caring and fighting for a more peaceful, rule-based, just and free world for people to live in. God is the one who is greatest, above each and every mortal human being whose station it is to pass away.

The fact that 'Allahu Akbar' is echoing through the Iranian night is not only an indication of the longing of people there to find a peaceful and just solution to this crisis. It also points to how deep the erosion of legitimacy is in whosoever acts against the will of the people, in whosoever claims to act on God's behalf to oppress his fellow human, including in this case some of the 'supreme' Islamic jurists themselves. This all goes to show that Islam, far from being merely an abode of repression and retrogression, has the capacity of being a fundamentally restorative and democratic force in human affairs. In the end, so it seems, at least in the Iranian context, 'Allahu Akbar', God is greatest, is a most profoundly democratic of political slogans. So deep is this call, that what is determined out of this liminal moment may very well set the terms for (or against) a lived, democratic Islamic reality for decades to come."

Hi enigma4ever, I hope you don't mind me hijacking your thread. I wanted to come by and give you an update on the Million Can March. It's starting to pick up steam. Now we're trying to get Rachel Maddow's attention and I need your help. Email Rachel@msnbc.com and tell her about our grassrootsy counter protest. You can read my email here: http://unrulymob.blogspot.com/2009/06/million-can-march-wants-you.html
One million cans of food: Yes we can!

REV...
thanks there friend...
I will be happy to write Rachel...and Keith...,and anyone else...I have been working hard on the Iran blogs this week....but you know I will be back blogging about the Million Can March again next week..promise...

thank you for all you do...

Many Silent Sit ins and Candle Light Vigils being planned for tomorrow- do check where you live:::

SMITH: People in this country say you haven't said enough, that you haven't been forceful enough in your support for those people on the street -- to which you say?

THE PRESIDENT: To which I say, the last thing that I want to do is to have the United States be a foil for those forces inside Iran who would love nothing better than to make this an argument about the United States. That's what they do. That's what we're already seeing. We shouldn't be playing into that. There should be no distractions from the fact that the Iranian people are seeking to let their voices be heard.

What we can do is bear witness and say to the world that the incredible demonstrations that we've seen is a testimony to I think what Dr. King called the "arc of the moral universal." It's long but it bends towards justice.

I pray they remember Ghandi and the impact of many large non-violent protests. So far the citizens have been pretty peaceful which is amazing considering the size of the crowds out on the streets. Somehow they have grasped the ring of destiny. I'm almost afraid to go to sleep tonight.

It is good to be empathetic with all people everywhere who rise up in the face of an oppression. It is a good lesson for complacent Americans.

Yet given that this is an internal dispute within the borders of a sovereign nation involving a regime that is in power, it is up to them to resolve it. As horrid as our perception of this regime is, it still is the legally constituted government of that nation.

President Obama has spoken his piece and in that he added the voice of America to that of the world.

The Iranians have to, must be allowed to, settle this in their own way without outside influences that can be later used as reasons for more violence from the regime in power.

I am highly concerned for the poet and intellectual thinkers I know and converse with in Tehran and because of this as an outsider I will do nothing or say anything that will be construed as interference in their domestic process.

as people of the world..
global neighbors....
there is a fine line between being one that interferes or one that offers support..
people are holding vigils as a way of support...

I blog this..
as support..
solidarity as people..
I blog what they want out...
the photos..
the video..

I can not change what their govt or leaders do...
but if they hurt their people-
they would want people of the world to know,
it is why they started doing signs in english..and french and spanish even....

on another level people need to do what they need to do ...
to be at peace about this....

I pray that they walk together in peace...