MORE ON THE HUMAN RIGHTS ISSUES:
CNN Blog confirms tonight what many of us have been reading on Twitter for days, and dreading confirmation, but it is true that the Government Police have been hauling people away from the Hospitals to Prison.
Another question that has not been explored or raised, this also means that the Medical Staff are working in a very dangerous situation....It is also questionable whether these people that are hauled away, if there is any way to track WHO has been arrested and where they are , and whether they will be given any medical care. I hope SOMEONE with UN, Amnesty International or The International Red Cross is demanding to see the Arrested in the Evin Prison .
~~~~~~~~~~~~~~~~~~~~~~~~~~~~~
Letter from a Tehran Hospital....please do read. And this SITE still is tracking the Dead and Killed that are Known, even though names are lacking, it close to 100 as of last night, with atleast 475 still imprisoned, after being arrested, but both numbers may be much higher.
~~~~~~~~~~~~~~~~~~~~~~~~~~~~~~
First Tehran Film Maker speaks out in this amazing post in Tehran Bureau , must read just posted tonight. It gets to the heart of the matter about people must not be silent at this time.
~~~~~~~~~~~~~~~~~~~~~~~~~~~~~~~
Updated List of Detained/Arrested Activists, Educators, and Journalists via Tehran Bureau and Reporters Without Borders and Amnesty International . ( I did cross check). This list does not have the MISSING. On twitter, many have noticed that accounts have not been updated since the 13th, and in past two days Some Account are suddenly being used again but they sound different.It is thought that perhaps the Basiji are accessing the accounts by using confiscated phones or worse measures.
~~~~~~~~~~~~~~~~~~~~~~~~~
Human Rights Watch has more that has been ongoing there, from Thuggery to beatings to Night Time Seiges on Homes.
~~~~~~~~~~~~~~~~~~~~~~~~~
Another Concern about the Students, now that the Universities are closed, it is difficult to ascertain more information about Missing Students and sadly families are having to contact the Morgue. This is one such story, that is heartbreaking it explains that families did find their son, dead and tortured and the Government is refusing to return his remains.
~~~~~~~~~~~~~~~~~~~~~~~~~~~
An article this am that High Religious Leaders in Iran are the ones pursing the Possible Execution of the Protesters.... It is very difficult to understand or grasp the notion of Respected Religious Leaders ordaining or ordering or condoning the Harsh Treatment , Torture or Execution of people, students, Educators or anyone ?
~~~~~~~~~~~~~~~~~~~~~~~~~~~~~~
And yet according to the TIMES in UK Ahmadinejead had planned a Purge the whole time.....
~~~~~~~~~~~~~~~~~~~~~~~~~~~~~
And as these concerns continue, another issue that has arisen is that now the Government is planning to pursue the harshest treatment possible for the protesters, possibly even execution according to Persian papers. Anderson Cooper on his blog weighs in on this issue, asking "Is this Islam". Sadly CNN won't air this important issue, they would rather celebrity-monger giving us 24 hour coverage that Micheal Jackson is still dead, yet it is paraded nonstop across all stations. To Say it is disturbing is the least of it, on another level as a viewer it raises questions about MSM enabling the Dictatorship there.
~~~~~~~~~~~~~~~~~~~~~~~~~~~
This editorial explains and examines some of what the Media is wrestling with during this Media Blackout.
~~~~~~~~~~~~~~~~~~~~~~~~~~~~
And there is more Amnesty International has more on the Situation and their concerns as this crisis continues.
~~~~~~~~~~~~~~~~~~~~~~~~~~~~
NEWS FROM WITHIN:
So What is it like in Iran and Tehran right now after the brutal week, and unrest for the past two weeks ? Now that the Internet and Twitter out Iran has crawled to a whisper, many are wondering what is going on there. This Guardian post has from Within that was written by a Iranian UK student that has just returned home that gives a very good description of what it is like.....

This account from the Financial Times ( ME) gives another account of WHY people still go to the roof every night to call to God, to Allah, written from Within.

Even though there is a hushed feeling looming over Tehran at this time....Change has come, as this article points out from the Independent.
"Crowds gone but Tehran changed forever", insightful article, hope for the future for the people and women. 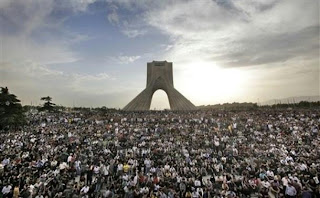 A Canadian friend ( Iranian) wrote to me and told me that Americans don't maybe understand some of Iran's History and the symbolic places that people have rallied. So she sent this article and said it would help explain the History of this moment.
article about the Azadi Monument....the Freedom Monument.

Another Canadian-Iranian sent this WSJ article that gives an inside look at the people there... and shows that they are not different than us ....not at all.
~~~~~~~~~~~~~~~~~~~~~~~~
How President Obama's Statements are resonating outside the US
BBC about Obama's Statements on Iran and their significance .6.26This link has been widely twittered and followed.
~~~~~~~~~~~~~~~~~~~~~~~~
More Examination on the Election Fraud
The Guardian is continuing their investigation into the Election Issues, and is dissecting the results that the Government has made public. It raises some real questions , especially if one compares these current results with the last election. This story will not go away because the severe Crackdown now just raises more questions about how legitimate was their election, because if it was a credible win, then scrutiny should have been allowed and a Recount should not have been an issue. Do look at this graph even if you look at the graph in the Persian paper, you can see the numbers are trending in an odd way. And this article carefully explains how Ahmadinejead could not have won,logistically not possible.
~~~~~~~~~~~~~~~~~~~~~~~~~
11 PM Song for the night "Stand by Me", Bon Jovi and Andy Madadian ( Iranian artist)

and then there is this one the WeaponX Song" Time for A Change"....

Email ThisBlogThis!Share to TwitterShare to FacebookShare to Pinterest
Labels: More Below on Solidarity Rallies and Vigils